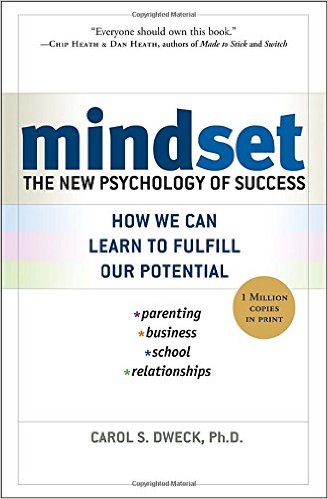 Military reading lists are sometimes criticized as too narrow, too lengthy, or—ironically—excessively military in content. Two alternatives to the traditional Chief of Staff of the Army reading catalog are lists by Andrew Exum and the Australian Army. Here is another atypical recommendation for junior leaders and younger soldiers. Mindset: The New Psychology of Success speaks to our greatest enemy of success: ourselves.

Dweck’s research highlights two types of mindsets: Fixed and Growth. The Fixed mindset puts individual attributes such as intelligence, physical ability, and personality as predetermined and unchanging. In the age-old question “Are leaders born or made?” the Fixed mindset firmly answers for the former. Once you find your limits, you are stuck with your lot in life. As such, nothing is ever your fault and you are the constant victim of circumstance.  Countering the Fixed mindset, the Growth mindset entreats a person to become successful at anything they set out to achieve. This is not the self-esteem movement of the 1990s; the Growth mindset requires active thought and lots of work to achieve your desired level of success.

Two things became very apparent before the halfway point of the book. First, there is a clear interconnection between mindsets and the military, although it is not explicitly discussed by Dweck. There is a direct correlation between the fixed mindset and toxic leadership. Toxic leaders are feared by their subordinates and peers because they are concerned solely with themselves. The problems in their commands are not as simple as a zero-defect mentality or a selfish nature. It is a fixed mindset belief that their soldiers are incapable of growth & progress, and thus the unit never satisfies its leader’s perfectionistic, insatiable demands. The relationship between the two mindsets and the military would make a fascinating research topic for an enterprising psychologist, Ph.D. candidate, or perhaps a follow-up from Dr. Dweck herself.

Second, this book is congruent with the timeless maxims on good leadership from well known Generals Colin Powell, Norman Schwarzkopf, Omar Bradley, Dwight Eisenhower, etc. Identify a successful leader you served with and analyze what made them a positive and compelling person to follow.  Specifically, consider how they handled a mistake you or others made. They may have still raised their voice and expressed their disappointment but a Growth mindset leader likely asked, “How can you become better? What did you learn from this? What are you going to do going forward? How can I help you grow from this?” Growth mindset leaders have a vested interest in making you better not through rote training but through detailed coaching. Growth mindset leaders are good mentors and as a result, good succession planners.

You’ll see moments where you applied the Fixed and Growth mindsets in different moments of your life. I spent much of my young life firmly in the Fixed mindset. If I didn’t pick something up quickly e.g. guitar or math & science, I decided I didn’t enjoy it, and eventually quit or did enough to get by. This hit me like a ton of bricks at West Point, where a willingness to accept your mistakes and grow from them is required to graduate. I not only failed classes but my peer reviews my first two years were awful.  I was termed a “tool”, a bad example of a leader on my yearly evaluations by my classmates and younger cadets. The Fixed mindset in me wanted to quit.  Thankfully, more than a few people entered my life in powerful ways to feed my Growth mindset.  I was able to correct my weaknesses and carry them forward as strengths in a decade-long military career.

Mindset does not focus on building strong teams.  Each of us should explore and master our owns mindset first before attempting to teach this philosophy to others. Multiple books could be written on applying the Growth mindset to sports teams, businesses, the military, or entrepreneurial ventures. Also, Dweck’s suggestions and examples seem a tad shallow. Embracing the Growth mindset of Tiger Woods and Alex Rodriguez forces one to get past the serial adultery or long term performance-enhancing drug use.  Then again, her examples walk the walk with the advice her research suggests: learn as much as you can from others to better yourself, accept responsibility for the work you put in, and embrace an attitude of learning and improvement.

Dweck’s book is easy to read and makes an easy addition to a leadership seminar or roundtable discussion. Any junior NCO or junior Officer would benefit from reading Mindset and enhancing their leadership skills.  Her research focuses mainly on personal growth, and it can be applied to manager-employee interactions, love & relationships, and military interactions.  It is easy to spot Growth mindset fundamentals throughout other leadership books like Deep Change, the Seven Habits of Highly Effective People, and The First 90 Days.  The Growth mindset is an attitude of learning and continuous improvement focused on progress rather than perfection.  Such an attitude would serve the military well.

This first appeared in The Havok Journal on November 29, 2016.