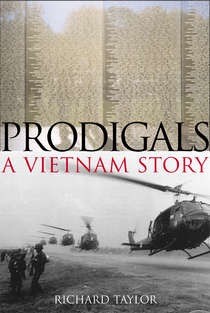 Every year I make it a point to have an extra drink on January 30, as I did in 1968.  The resulting hangover is self-inflicted punishment I willingly bear for having survived. — Richard Taylor, Manila, 1993, 25th anniversary of the TET offensive, page xiii.

It is often said, “Those who cannot remember the past are condemned to repeat it.”  As I read Prodigals by Richard Taylor, I was aghast at countless, subtly placed lessons learned…lessons supposedly first gleaned in the sands of Iraq and the mountains of Afghanistan.  My knuckles grew white gripping the cover; life-saving past lessons had been forgotten. My teeth grit in anger; my generation has been the condemned repeating past mistakes over the last decade. Everything old is unfortunately new again. This, ladies and gentlemen, is why every young officer should read Prodigals. 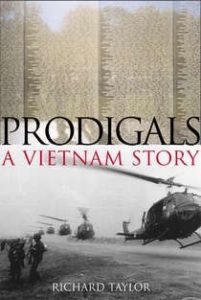 Colonel Richard Taylor, U.S. Army, Retired, arrives in Vietnam in 1967 as a green Second Lieutenant, fresh from Infantry training and the Military Assistance Training and Advisors Course. Attached to the 7th ARVN Division in Kien Hoa province, he survives numerous battles, including the TET offensive. Returning home, he graduates Ranger School, the Infantry Advanced Course, and gets married in short order before voluntarily going back for a second tour in 1970. He successfully commands an airmobile company in the 1st Cavalry Division and spends the latter quarter of his second tour as the Battalion S-2 Intelligence Officer. The books does not cover periods outside of these aside from an equally engaging preface and postscript.  The chapters have succinct clarity and move swiftly.

The leadership lessons throughout are numerous, subtle, and incredibly appropriate. Discipline is critical to survival in combat. The judgement of the man on the ground should be trusted and backed by his leadership (Amen!). Special Forces soldiers will appreciate Colonel Taylor’s frustration with roughing it in the field with a willing but poorly supplied foreign force, while higher headquarters literally wines and dines a few miles away in relative luxury.

Anyone who has partnered with Iraqis or Afghans will understand the pain he feels when he learns his friend, a Vietnamese Lieutenant, was killed on an operation. Service members will nod approvingly at Colonel Taylor’s drive to find his unit and advise his ARVN battalion through the TET offensive, despite recovering from wounds. Staff officers will appreciate the mental drive he exerts as an S-2, while commanders will be rightly reminded how small amounts of mentorship, talent management, and guidance at the right time can win the day or solve a complex problem.

Given Colonel Taylor’s decorated service as a soldier and a civilian, I expected a certain amount of ‘perfection’ throughout his reminiscences.  Instead, there is a clear lack of arrogance in the narrative, and from the very beginning the author makes himself remarkably vulnerable to the reader. Within the first 20 pages, Colonel Taylor speaks of speechlessly leaving his crying parents in Florida, falling head-over-heels for the airline stewardess on the flight to Southeast Asia, and embarrassingly mistaking a cleaning lady’s lunch for a bomb his first night in country.

New leaders, take comfort; many before you have had the first-timer jitters. The honest appraisal of his mental state during those initial days sharply contrasts his seasoned, albeit frustrated outlook at the end, showing incredible growth and strength of character.  The vulnerability consistently remains as Colonel Taylor shares a poignantly disappointing mid-tour experience with his wife, his conflicted feelings on the war, his anger at the home front, and the pains of losing men under his command.

I also expected a certain amount of moralizing, as some memoirs are wont to do. The Vietnam War era presents not only the pain and suffering of the military, but the pain and suffering of the entire nation as it struggled with race, drugs, and televised war in all of its horrific and vivid colors. Prodigals is not distracted by these topics. It does not wax poetic about greatest generations, the all-volunteer Army versus draftee Army debate, or how deglamorizing alcohol made the military more effective.

It simply describes the war as Richard Taylor experienced it, from forcing his platoon leaders to tighten up nighttime security, to throwing white phosphorous grenades out of a helicopter with his former Battalion Commander (Composite Risk Management be damned), to installing an ice chest at his bunker to keep his beer cold (General Order #1 be damned). The absence of sermonizing makes it a refreshing and enjoyable read.

Every combat veteran can relate anniversary drinks raised in memory of brothers and sisters lost on foreign soil, meant to assuage the heavy burden of survivor’s guilt. Many, too many, families know the bitterness of loss. All can appreciates the warmth of a loving spouse, no matter how many continents separate their love. Remembrances of the first meeting with the heat of Southeast Asia brought back my own memories of the oppressive heat of Kuwait. In Colonel Taylor’s naiveté as an advisor, I saw my own as a new platoon leader in Iraq.

His growth into a capable company commander mirrors my growth into Special Forces Detachment and Company Command. Through Prodigals, the reader will feel the rush of close air support, vividly recall the crack of AK-47 rounds, fondly remember foreign partners, and for some, recollect the helplessness of friendly fire. It is all there, without pretension, hubris, or righteous indignation. It is a moving, poignant, and fitting tribute to the prodigals who did not return, and a worthwhile leadership primer to those who carry the torch forward to the next generation of warriors.