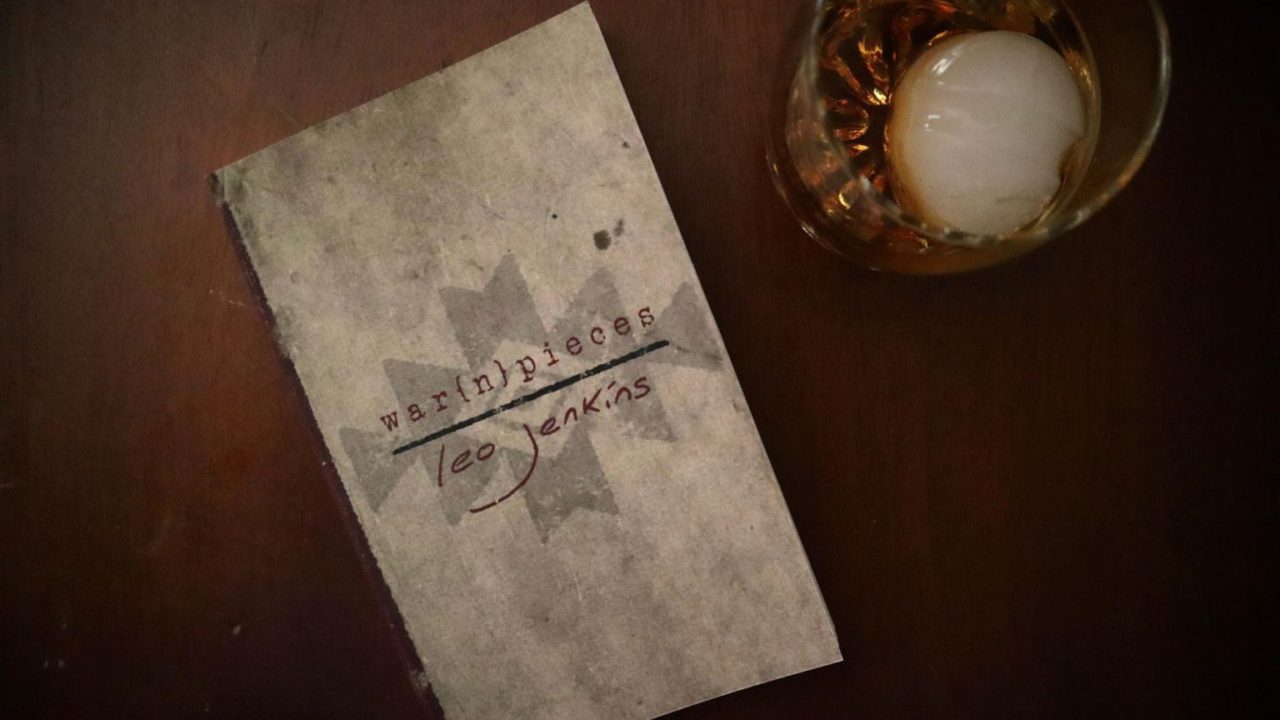 war{n}pieces, the second poetry anthology from Ranger/poet/vagabond/philosopher Leo Jenkins, offers meditations on the theme of love over a range of topics. I’ve had the privilege of reading Leo’s personal journey across his series of memoirs. While his previous books dealt with fighting war, returning from war, and healing from war, this volume is the flip side of that coin. These are poems of love in war, love in relationships, and the necessity for love within a divided society.

Leo sets the tone of his book at the very beginning with no less than the copyright page, which he has presented as a poem. Leo carries this unconventional, frequently tongue-in-cheek approach to the other poems in this collection. He compares his work to an improvised explosive device [IED] in “ILD.” He takes a rebellious, insurgent method to the craft of poetry, contrasting his approach with the attitudes of the academic elites who “guard” the art form. “look I’ll take the ‘low brow’ crowd,” he writes. “They’re more fun to drink with anyhow.”

Eschewing modern poetic conventions, Leo takes a more melodic, lyrical approach to this volume. Leo has talked about being influenced by the musicians and hip-hop artists he listened to growing up. There is more than a little Dr. Dre and Wu-Tang Clan in this volume. The repetitive use of end rhyme structures in poems like “To Be Here” call to mind such bands: “Perhaps I’m being dramatic/about the amygdala gone spastic/media beats that button/ignores an ocean filled with plastic.” In tone, as well, he channels these 90s-era musical rebels as in “Face{mask}Yourself”: “If I were lyric/I’d be Lars Ulrich/arrogant and repetitive.”

While reveling in the lyrical freedom of his art form, Leo still structures a few of his pieces in traditional poetry styles such as the villanelle and pantoum. The stylistic diversity of each of the pieces he presents makes each one memorable and keeps the reader engaged from start to finish.

While each poem is constructed differently, from formally metered cadences to free-flowing prose poems, thematically, each piece is a different meditation on love against the backdrop of conflict. “Invader G” describes the encounter between an American soldier and an Afghan civilian and highlights the shared humanity of the two in the face of war and cultural opposition. The anthology moves forward, however, from just war poems. Leo ends that section, appropriately, with a break up letter to war itself, “Dear War.”

Moving on, Leo writes about conflict within our modern-day society, particularly the issues that are leaving America so divided at the moment. Environmental issues, police protests, the Corona virus, and political leaders are all addressed. “you{we}me” should be required reading for our polarized society. “We dreamed/we dreamed/we woke and screamed/when fear seemed/to be our new reality/this looming melancholy/dividing ‘we’/into you and me.” “What’s Heard” is another crucial poem that is a cry to America to come together through debate as opposed to fractious contention. “The burden of freedom/burgeons in conversational narrative/what’s said is important/what’s heard is imperative.”

Leo continues his call for love across the backdrop of the superficial consumerism within our culture. In “We, the Wheel” he questions, “could it be time to realign/and focus on what’s lurking/beneath the surface/or should we make another purchase?”

The volume transitions to more personal love poems. The echoes of war are ever persistent, however. In “It’s Tough,” a relationship fight is described “with rounds flying.” “Slings and Arrows” contrasts the joys of love with the wounds and scars it leaves behind. “Make” describes the union of two people after leaving war behind “in all its storied splendor.”

That is ultimately the theme of this anthology. Leo is leaving behind the physical and internal warfare he described in his previous memoirs. He is admonishing us, as a country, as a society, that the only way forward is to leave conflict behind and find a path of love. war{n}pieces contains Leo Jenkins’ best writing to date; it is an anthology worth reading and re-reading. As America steps away from its longest war and enters what will surely be a vicious election season, we would be well served to read and reflect on Leo’s anthology of healing, redemption, and love.

About the author: Jonathan Baxter is a former US Army Ranger and private security contractor. His poetry anthology, The Ghosts of Babylon (Blackside Publishing, 2016), is a reflection on his experiences in Iraq and Afghanistan. His writing and poetry have been published by The Havok Journal, Broadsided Press, Middle West Press, and the Dead Reckoning Collective. He can be followed at www.mercenarypoet.com.