When “She Said” alleges rape, “He Said” denies culpability. Even when caught with his pants down and balls out, the “He Said” denialist pulls out the ancient Adam-blamed-Eve excuse, “She Said wanted it.” Or that famous line in response to She Said’s “No?” “It was consensual.”  Not Alone cites familiar themes swirling around the Rolling Stone controversy:

“One report found that 40% of college survivors feared reprisal by the perpetrator, feared treatment by authorities, did not know how to report, feared lack of independent proof, and did not want families or other students to find out what happened.

Still others don’t report because they don’t want to participate in a formal college adjudication process. 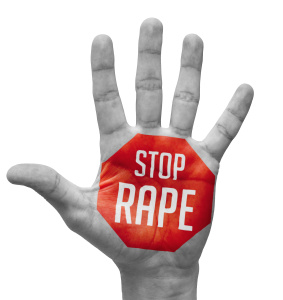 I worked for a nonprofit answering letters (over 25,000) from people traumatized by rape, incest, and every other kind of nothing-new-under-the-sun interpersonal violence. After you’ve read hundreds of letters from incest and rape survivors and convicted criminals, you begin to recognize certain patterns.  What is forever burned into my photographic memory bank? Chilling, remorseless letters penned by incarcerated “I’m-an-innocent-man” rapists and pedophiles and letters from victims reaching out for help.

One self-pitying rapist/pedophile — cue the violins — lamented that a two-year-old female toddler “came onto him.” Really? A prepubescent, infant yearned for a perv to violate her?  Another letter written by a single mother who engaged in sex outside of marriage with her boyfriend stand outs. Heads-up single moms: Sexual predators target single moms to date to gain sexual access to your children.  When she reported to her church leaders that her boyfriend, a leader in their church, raped her FOUR children, the church called her a liar and threw her out. They accused her of sexual immorality, therefore, rendering her story a downright lie. I’ll never forget the alleged rapist’s modus operandi and religious costume: served on the church board, taught Sunday School — lawyer!?!?!

Hey, if there was ever an innocent man falsely accused that was him, r-i-i-i-ght?

And I’ll never forget the employees of one religious organization crucifying a single mother whose child was allegedly sexually assaulted by a co-worker, a former youth worker. Employees lined up against the single mother, tormenting her at work, all the while supporting the alleged sexual assaulter. Not only was this mom reeling from the agony of every mom’s worst fear, she faced the nightmare, ignorance and zeal of virulent co-workers’ excruciations. What part did they not understand of Micah’s rebuke and command to the religionists regarding those who needed protection most — the poor, the widows and the orphans? But he’s already made it plain how to live, what to do, what God is looking for in men and women. It’s quite simple: Do what is fair and just to your neighbor, be compassionate and loyal in your love, and don’t take yourself too seriously — take God seriously.  (Micah 6:8, MSG)

Make no mistake. God seriously takes hurting children serious. “But if you give them (little ones) a hard time, bullying or taking advantage of their simple trust, you’ll soon wish you hadn’t. You’d be better off dropped in the middle of the lake with a millstone around your neck. Doom to the world for giving these God-believing children a hard time! Hard times are inevitable, but you don’t have to make it worse—and it’s doomsday to you if you do. (Matthew 18:6, MSG)

I was one of two who showed up at court to sit alongside the devastated single mom to provide emotional support. Standing outside the courtroom, one of the alleged assaulter’s supporters aggressively approached me and snarled with contempt, “Why are you here?” As if I was a piece of trash that didn’t have the right to sit in a chair in the same courtroom as this defender of the accused.  “I’m here to support (mom’s name).”  Another supporter of the victim admitted to me before walking into the court room, “I was molested.”

I wondered, but thanks to my Southern mother’s ingrained, “It’s rude to ask personal questions,” I didn’t venture asking: Why and how could you support someone charged with sexually assaulting an eight-year-old? Instead I inquired, “Did you report it?”  “No.” If someone who’s been molested, assaulted and/or raped supports someone who’s been arrested and charged with sexual assault, what does that say about the emotional craziness of denial, shame and humiliation related to this issue?

It did not escape my notice that the alleged sexual assaulter’s supporters did not attend the sickening testimony of that eight-year-old. Kids just can’t lie, make up or be coached to share that kind of nauseating detail that was not shaken by the alleged sexual assaulter’s lawyer, who cross examined that child by asking double-negative questions. However, the accused supporters did fill their half of the spectator gallery the day some of their kind sat in the witness chair as “character” witnesses for a man charged with sexual assault.

The jury convicted the man for one count of “sexual assault on a child by a person in a position of trust.” As the convicted sex offender was led off to jail, one supporter hollered, “We love you (name of convicted sexual assaulter) and then turned to spew venom on the single mom, “We hope you’re satisfied.”  After release from prison, rumor radio reported that supporters of the convicted ‘innocent’ sex offender allegedly aided and abetted him to disappear to avoid registering as a sex offender. I’ll never forget my conversation with the detective who’d investigated the youth worker’s past who “worked” youth. For whatever reasons, the evidence the detective found was inadmissible at the trial.

The Loss of Innocence

I reported to a pastor my discomfort with the unasked-for behavior from a man he’d recommended to help me in a business matter. My elementary-aged son, Kristoffer witnessed the repeated wanderings of the hands of said church “leader” who “loved to help single mothers.” The pastor ignored my report. I left his church.

Mr. Wandering Hands was allowed to continue “helping single mothers.” I observed how this man’s behavior enraged my Warrior Son who didn’t like how Mr. Helps Himself to Single Moms refused to keep his hands to himself, even when rebuffed. Because I didn’t want my Warrior Son to believe that this man’s behavior was Christlike or normative male behavior, I engaged my son in a conversation.

“How did the way he touched mommy make you feel, Kristoffer?”

“Thank you for being angry, Kristoffer. When a man touches a woman that isn’t his wife the way he touched me, his actions make God angry too. I’m so proud of you that you understand the difference between right and wrong. You will learn that some people who call themselves “Christians” — aren’t. And what he did is what God calls sin and it’s wrong.” I felt guilty offering my son this heads-up about religious folks, possibly influencing him to feel cynical about faith in God.

I’ve spent hours listening, supporting and praying for friends struggling with flashbacks of incest and rape that happened years ago. Even though they’ve spent years and years in therapy to deal with their emotional triggers, family members still deny abuse happened. DA’s refused to press charges, because the emotional trauma made the victim an ‘unreliable’ witness. But there is nothing covered up that will not be revealed, and hidden that will not be known. (Luke 12:2, NASB) One friend’s serial rapist was finally caught and convicted. But at what cost to the unnecessary loss of more women’s innocence?