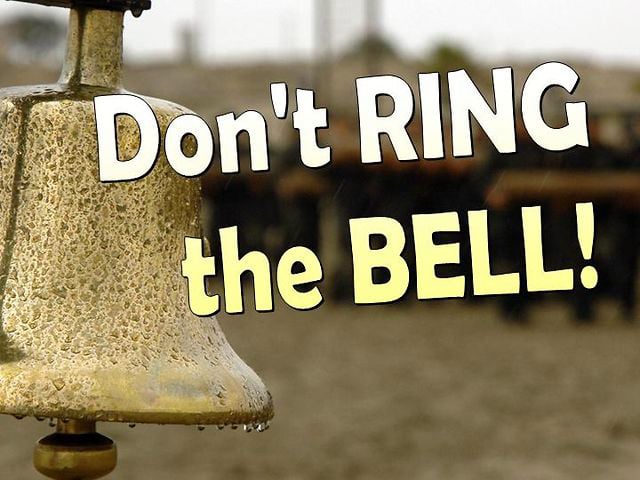 Admiral (Ret) William H. McRaven, former SOCOM commander, told graduating seniors at the 2014 University of Texas commencement ceremony 10 lessons from his Navy SEAL experience.  The final one: “If you want to change the world don’t ever, ever ring the bell.”

He’s right, of course. I know what happens when you do.

Bad stuff doesn’t start when you ring the bell; it starts before. 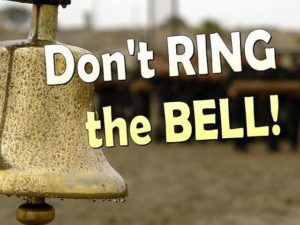 The ruck on your back doesn’t bother you but the pebble in your boot is killing you. You think more and more about the possibility of getting hurt, and less and less about pushing through. Your body burns calories like a furnace but you have no appetite.  You can’t sleep even though you’re exhausted.

You pray, plead, stretch, put on a brave face, joke with the guy. Nothing helps.

Something doesn’t feel right.  Something is just not right.

That something is you.  You are in your own mind.  You are your own worst enemy…and you are spiraling down.

Your body is fine.  Your mind is fucked.  You think your body is fucked, but that’s just your fucked up mind fucking with you.

You start to question things, things you’ve never questioned before.  You begin to question your preparation, your ability, your strength. You compound your problems by focusing on before rather than now. That is lonely territory. Don’t go there.

Before you know it, you’ve mentally taken yourself out of the race, although you’re still running in it.  You’re fighting to get yourself back in the game, push your body through, and oh by the way, be successful when its over. Hell, you aren’t even thinking about success at this point.  The “cast or tab” mentality is gone. You’re only concerned with finishing, and finishing isn’t good enough.

You’re pulling yourself in opposite directions. It is a battle few people ever win.

You know you have what it takes…right? They chose you because they know you have the potential…right? You stack your doubts, brick by brick, sealing yourself in a tomb of self-pity.

You ring the bell. You voluntarily withdraw. You self-select out.

They will segregate you from the group, give you special instructions, and tell you to sit.

You might be left alone. If you are alone, I guarantee you’ll cry.

You’ll cry once you realize the pain you felt was a phantom of your fucked-up mind. Your body is fine. You’re sore, but nothing is broken or bruised.

You’ll cry when you realize you turned your back on the only person who ever really had your back…You.

You’ll cry because you probably haven’t cried in years.

The out-brief and return home is professional. “You gave it your best shot,” they’ll say.  “Thanks for trying, good on ya.”

People won’t look at you differently, and they won’t talk or gossip. They won’t make your life hell. No, you’ll make yourself miserable if that’s what you allow yourself to do. That is when bad stuff happens. Problems will arise in every aspect of your life, work, and family, and your decision-making skills will suffer, creating more problems. You feel like a boxer against the ropes, but your opponent is pummeling you.

The opponent, your opponent is YOU. Get out of your own way.

You’ll ask yourself if you just gave up on your grand design, God’s Plan, fate, destiny, or whatever you call it.  Guess what: there is a lot of life left to live.

You’ll beat yourself up for failing at something you really wanted. You chose to go. Guess what: you tried, you failed, you know why, so fix it.

You’ll see it as a microcosm of everything bad that happens in your life from that point forward.  Maybe it is the Law of Attraction.  Maybe it’s just a string of bad luck.  Guess what: refocus and do your best at what is in front of you.

You’ll wonder if you’ll ever have a second chance again.  Guess what: you will or you won’t. Accept it and train hard.

If you do have a second chance, be ready.

You’ll ask yourself how you got so mentally weak.  Guess what: admitting the problem is the first step to recovery. Identify your problem, rebuild your strength, hone your killer instinct, and head back into the arena.

Get out of your head.  Keep going forward, keep climbing. There are more things for you to do.