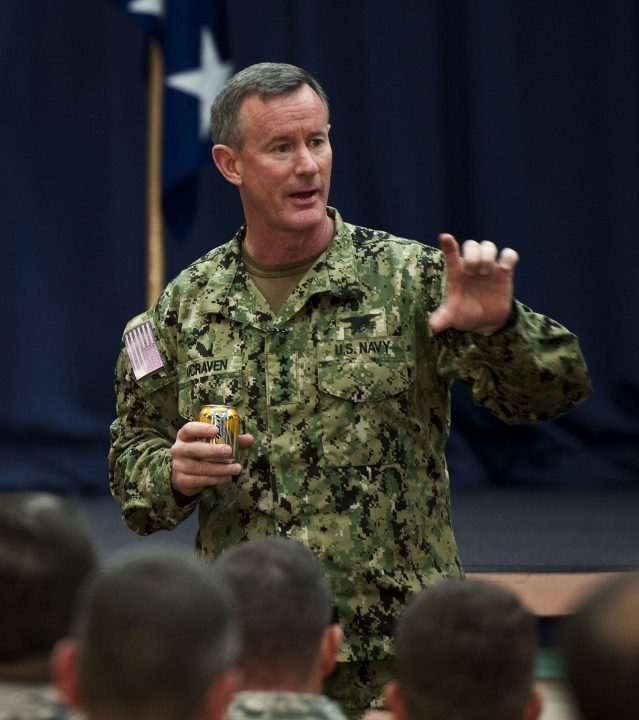 Whoever is writing Bill McRaven’s speeches these days deserves a big raise.  Seriously.

Admiral William McRaven, the commander of Special Operations Command (SOCOM) and the US military’s highest-ranking Navy SEAL, has been killing ‘em lately, and we don’t just mean the terrorists.  First there was his “500th Night” speech at West Point, a powerful and memorable presentation that quickly went viral, and our writeup of it became the most popular piece we ever posted.  McRaven again made headlines earlier this month with the graduation speech he gave at his alma mater, University of Texas, where he outlined ten simple rules that might just help young people prepare for life, in or out of a military uniform.  And of course there are probably a whole bunch of other speeches of his out there that we just haven’t heard about yet.

More about McRaven’s speeches in a bit; first, let’s talk about the man and not his words.  At a time when flag officers in the military are making headlines for all the wrong reasons, it’s great to see someone getting it right.  McRaven’s speeches are topical, timely, inspirational, encouraging, and full of humility and self-deprecating humor.  He really understands how to reach people, something I saw firsthand in Iraq and Afghanistan when he commanded our Special Operations Task Force.

In a military often rife with intra-service parochialism, McRaven is not afraid to give credit and praise to the other branches of service, particularly to erstwhile arch-foe Army.  For example, in the West Point speech, McRaven observed “there is no more noble calling in the world” than to be an Army Soldier, despite the fact that he himself is in the Navy.  This is a man of great humility, who jokes about his poor undergrad GPA but remains silent about his graduate degree work as the prestigious Naval Post Graduate School, where he wrote a masters’ thesis on Special Operations that was so compelling it was later written into a book that is still studied today.  He is careful to laud the accomplishments of others, but never mentions his own.

Nor does he need to; his accomplishments speak for themselves.  He was the man who as the commander of JSOC oversaw the raid that got Bin Laden, a guy who was a contender for Time’s Man of the Year, but can still take the time to answer a six-year-old kid’s question about who’s quieter- ninjas or SEALs (for the record, it’s the ninjas).

And oh yeah, he can deliver the hell out of some speeches.

Those of us who worked with Admiral McRaven in the past know that he was a journalism major in college and extremely intelligent and well-spoken, so it’s quite possible he writes his speeches himself.  In fact, given the deeply personal nature of his remarks, it seems likely he does his own speechwriting.  If that’s true, it makes them that much more special.  Regardless of who does the writing though, the presentation is all McRaven, and only he has the kind of credibility to pull it off.

So now let’s finally get to why we’re writing this article:  McRaven’s most recent oratory tour de force.  The transcription that follows is courtesy of the University of Texas, although we fixed some minor errors and changed a bit of the formatting for readability.  The speech itself runs over six pages of text, so we summarized the key lessons below.  You can also watch it for yourself online.  Read it… watch it… or do both, it’s well worth your time.