HomeNationWe Must Stand in Solidarity with UCSC 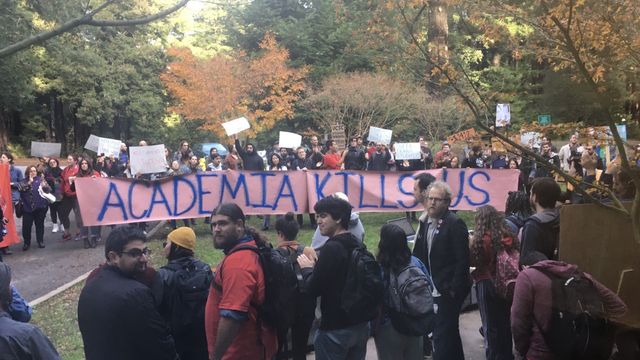 We Must Stand in Solidarity with UCSC

The graduate students at my school, University of California Santa Cruz (UCSC), along with faculty members, student-workers, and undergraduates are currently on a full teaching strike insisting their Cost of Living Adjustment (COLA) demands be met to supplement the high cost of living in Santa Cruz. The effects have been classes needing to be moved to a remote location, meet online, or be completely canceled. I’ve asked professors for their opinion on this and have received back answers ranging from full support to unsure of the tactic being employed by the students. Regardless, our graduate students are on strike and are drawing more support for their cause. Thus, I write this entry imploring the veteran community to join in solidarity! For on one hand there are veterans, like myself, in the UCSC community are either directly or indirectly affected by the full teaching strike; and on the other hand, staying within our community I argue narrows our field-of-view.

The issue in this strike, according to the University’s administration, is that any form of meeting that takes place between themselves and an unsanctioned strike is against the bargaining agreement the UC has with its graduate students, and the UAW. Moreover, under this bargaining agreement a full-scale teaching strike and withholding of grades are unauthorized; both of which are currently being conducted. Recent meetings with graduate student representatives from all the UCs at Irvine led to no resolving of the issue. The issue is that of the graduate student who is working, researching, grading, commuting, teaching et cetera not being fairly compensated for their labor; the cost of intellectual labor is praised but not paid.

Today was day three in the full teaching strike, and although I have not been present, pictures, videos, and news reports have shown an incredible picture. It is easy to point out the militarization of the police dressed in riot gear guarding the streets, beating individuals with batons, arresting an individual for bringing water to the picket line et cetera; the beauty of it all is in the capacity of humans being able to empathize with their fellow (wo)man. That is to say, to come together and recognize the needs of graduate students and to rally behind them is an amazing and historical moment to be a part of. The beauty is in the coming together as a community in the face of power.

I support the graduate students and their supporters in the fight against corporate greed and capitalism. However, I myself am at a juncture between the contradiction of the capitalist system and life. Put in other words, how can I, the beneficiary of the Post 9/11 G.I. Bill simultaneously be against a system for which I served and is now still providing me with the necessary means of living; at the very least providing an opportunity? (e.g., education and health benefits to name a couple). It rings empty and hollow with nothing at stake except my own conscience and reputation. Should I then forfeit and not use my Post 9/11 G.I. Bill? I would be lying if I wrote I had never considered it. Perhaps there are some out there who have never used it for their own personal reasons; that still does not trivialize my own reasoning as this is not about whether to use one’s educational benefits or not, rather it is about deliberately acting against capitalism’s need to naturalize everything as if there were no other way of living. As veterans we are situated between opposites: on one hand the struggle against an oppressive capitalist regime exploiting graduate students’ labor; and on the other hand, our former selves fighting on behalf of capitalism; yet, here we are, caught in the crosshairs.

Thus, my perception of the strike is complex in its simplicity. Simple in that graduate students deserve to be paid a wage that will allow them to be able to do what is required of them as graduate students; this can be likened to leaving the wire without ammunition; or worse, without ammunition and support. Of course, it’s not the same thing. One would think he would never leave without these essential things in order to survive away from home. The backwardness here at home, however, is that of one barely having a home to go to and is being pushed outside the metaphoric wire to bring profit to the UC institution. What I mean to say is that the veteran community has a wide scope and Himalayan depth of experience where h/she can, and should, support our strike and not merely think of the strikers’ cause as illegitimate or hopeless.

It is complex in that I, along with (most) fellow undergrads and graduate students, share a desire to be in the classroom, learn, and take full advantage of the resources available to us while at the University’s location. Still, I am not able in good conscious to cross the picket line to get to my work-study or on-campus for any reason. To say the strike is what is preventing me from attending class, and for what the VA is paying me to do, —actually it’s to pass my class(es)—is to point the finger in some sense at the graduate students. I am only (un)fortunate enough to be witnessing a long-time-coming and expected explosion of an oppressed community of individuals. But this anxiety of choosing between either/or is what is needed, is it not?

In another sense, one may argue I am only creating havoc from nothing, anxiety from the air that is neither here nor there. Or worse, one may give the threadbare adages of antiquity: one has to deal with the cards h/she was dealt with and pull themselves up by the boot-strap; don’t have a cry-baby mentality; no one cares about your feelings; you signed the contract too bad et cetera. The issue with this is not in its insensitivity, rather it is in its bloated state of sensitivity. This thinking towards fellow (wo)man is pregnant with the ego its very self’s sensitivity in that it abhors anything that contradicts the individual’s tribal mores and in what h/she was taught how things must be done.

I believe that in times like these at UCSC, we, the veterans, can relate to the graduate students on a much deeper level than what is originally thought of concerning our civilian friends. Therefore, let us stand in solidarity with the graduate student strikers at UCSC until their demand for COLA is met.

Moses is currently an undergraduate student double majoring in Literature, with a language concentration in Latin, and Philosophy at the University of California at Santa Cruz. I currently reside in Monterey, California where I spend the time I have away from school taking photos and writing poetry–two of my poems were published in the anthology “In Love & War“).  I was active duty in the Marine Corps for ten years: first as an infantryman with 2nd Battalion 7th Marines, then with 3rd Battalion, 5th Marines before becoming a stableman with the Marine Corps’ Mounted Color Guard.