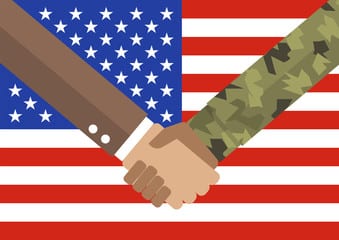 Despite being engaged in the longest period of constant warfare in United States history, the percentage of Americans who have served in the armed forces is at an all-time low; by some estimates, less than 1% of the total U.S. population.

Exacerbating this situation, members of the armed forces are often ensconced in military bases, with their own shopping facilities, education complexes, and entertainment outlets, often far from large population concentrations and centers of education or policymaking. In fact, almost a full half of active U.S. forces (49%) CONUS are stationed in only five U.S. states. The Base Realignment and Closure (BRAC) process, while serving an important streamlining and efficiency function within the military, has the unintended consequence of compressing the military even further.

Further complicating the situation, military service is no longer seen as a viable career option in many segments of American society, and in those segments where it is still viewed favorably, the military service is often a multi-generational “family” affair, resulting in further social stratification. With an all-volunteer force composed largely of people from one segment of society fighting a type of warfare that rarely, if ever, affects most Americans directly, more and more of the burden of warfare is placed on a smaller and smaller portion of US society and the military instrument of national power is concentrated into fewer and fewer hands.

Americans seem more ready than ever to outsource national security, as indicated by the dependence upon “private contracting companies” (which in earlier years might have been known as “mercenaries”), foreigners seeking citizenship, and an emerging “military caste” of Americans consisting of those few who are both able and willing to serve. The result of this is that America’s armed forces and American society are drifting further and further apart, creating a potentially dangerous divide between those who develop national policy goals and those tasked with carrying them out.

These issues are a problem for our country for a number of reasons, not the least of which is the fact that the military is one of the few genuine melting pots left in America and one of the few institutions that Americans seem to trust. This is where we are today in U.S. civil-military relations… where do we go from here?