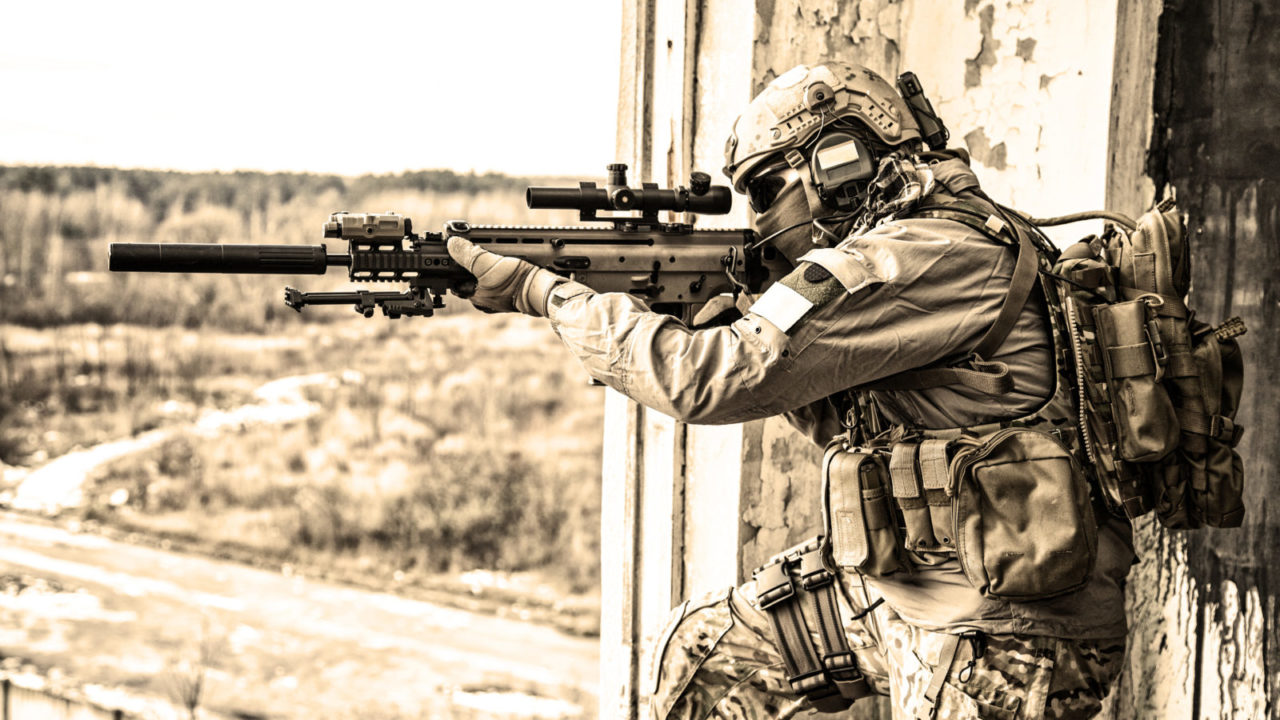 An excerpt from Warning Order: A Search and Destroy thriller by Joshua Hood, a former 82nd Airborne soldier and currently is a member of the SWAT team in Memphis, TN:

Syria, 2014
Mason Kane stepped out of the shadows, which hung like skewed curtains over the tight alleyway, and moved silently towards the target house. Despite the “all clear” from the sniper providing overwatch to his rear, Mason’s senses were on high alert.

His back was now exposed to the open street behind him, but Mason was trusting that Grinch had him covered. It was a hell of a thing, placing his life in the hands of another man, but Grinch was the best sniper he’d ever seen. If anyone had earned the right to cover his six, Grinch was the man.

Mason paused to wipe his face across the sleeve of his faded brown shirt, feeling the prickle of his thick salt and pepper stubble through the fabric.

“Fucking heat,” he muttered to himself.

Despite the early hour, the alley was muggy and the trash strewn across the jagged cobblestones smelled of stale urine and rotting vegetables. It was a smell he’d become intimately familiar with during the years he’d spent deployed to Iraq where he’d honed his ability to fit in amongst the Arabs he was paid to hunt. His dark eyes, olive skin, and knowledge of local customs and languages allowed him access to a Mideast that most Americans didn’t know existed.

Mason pushed all of that out of his mind a second before inching the barrel of his AK 47 around the corner of the alley, and stepping out into the open. He spotted a doorway up ahead and quickly moved toward it, the AK sweeping back and forth as he moved. Angling wide to ensure it was clear, he stepped out of the street and into cover. He glanced behind him, just as Zeus’s muzzle flashed around the corner. Mason felt better knowing that there was another gun in the fight, especially since it was one of the only men he trusted in the world behind the trigger.

The stocky Libyan, and the rest of Mason’s five-man team, had been out for five days on a recon mission just north of their present location, when they had gotten the call from Task Force 11’s tactical operations center or TOC. Instead of heading back to the safe house for some much-needed down time, the team was given another target, and ordered south.

Mason had tried to press the battle captain for more details, but all the man would say was that a mission was in the works, and they needed to move. He could tell Zeus didn’t like the idea of going in blind.

“What do you think?” Mason had asked Zeus.

“It’s a bad idea,” the Libyan said as he pulled on his prized goatee. “Too many variables, and not enough intel.”
Before he had a chance to say anything else, the captain broke in with a bombshell.

“The DoD’s source is already on the ground. The mission’s a go if you’re there or not.”

“Shit,” Mason swore. He knew there was only one man they’d use for this mission- his old friend Mick Boland. Mason stepped back out into the street, and was moving up to the target house when Grinch hissed:

Mason froze as a man emerged on the street and bent his head to light a cigarette. Mason could smell the acrid tobacco burning as the man touched the end of the cigarette to the lighter, then blew out a jet of smoke.
“No shot,” Grinch whispered across the net.

“Time to get up close and personal,” Mason murmured as he eased the AK to his side. He silently slipped his knife from its sheath at the front of his chest rig, before taking a careful step forward.

The bullet wound he had sustained to his thigh eight months ago throbbed as his right foot made contact with the ground. His left hand pressed the slung AK 47 against his body so it wouldn’t scrape against the concrete.

He was close enough now that he could smell the sweat of the inky outline, which stood out like a darkened blob amongst the heavy shadows. He knew that he was running out of time. Any second now, the azan, or call to prayer, would be blasted from the speakers festooned to the mosques dotted around the tightly packed neighborhood. If he didn’t get his men off the street before that happened, they were screwed.

The American already had a list of contingencies running through his head if they were compromised, but with Boland on the ground and the strike team birds coming with or without his team in position, his options were severely limited. They were going to have to suck it up, and pray they could stay hidden.

Mason stepped forward, clearing his mind, and carefully set his right foot between the jagged pieces of concrete littering the tight side street. He could feel the blood pounding in his ears, amplifying every little move he made. Then the target moved.

Mason froze, holding his breath while the man shifted his weight to his right leg, in an effort to get comfortable.
“One more step,” the American thought—at the same moment his left foot crunched down on an unseen shard of concrete.

The Arab flinched at the sound, his head turtling down to his shoulders, and he whipped around to see who was behind him.

The excerpt first appeared in The Havok Journal 28 July 2018. You will want to continue reading this story above by buying the book, Warning Order: A search and destroy thriller by Joshua Hood, here!