For those who don’t know, I am the editor emeritus of The Havok Journal. This past weekend I was talking with new editor, Doug Penhall, about Captain Kate Nelson’s latest article, “Blue on Moo,” which is a vignette about something that happened in Afghanistan during Kate’s time in the 82nd Airborne Division. First of all, this story is hilarious. If you haven’t read it already, go check it out. Second of all, Doug and I both observed how hard it is to find good clip art of female American soldiers to go with our Havok Journal stories. We use Adobe Stock for our article images on The Havok Journal, mainly so we don’t have to worry about getting sued over copyright issues. Generally  speaking, Adobe is really good and contains lots of great images that we use all the time. I’m usually very happy with it. But where they (and the last subscription service we used, Dollar Photo Club) came up short is pictures of females in the military.

Actually, I take that back. There are lots of pictures of “military females” in Adobe and other services.  But in terms of professional portrayals of military females, there are very few good ones.

I’ve been blogging for a long time, and one thing that I’ve noticed but never thought much about before is that while Adobe and others do have a few good shots of female soldiers, most of the rest unfortunately fall into what one of my female peers once described to me as belonging to one of two categories: “slutty” or “shitty.” Take Kate’s “Blue on Moo” article, for example. What would have been ideal is a picture of a female American soldier in OCP (the Army’s latest uniform) throwing a punch, even better if a cow was somehow involved. (Yes, Kate punched a cow in the face during her tour in Afghanistan with the 82nd Airborne Division. This sounds a lot less weird if you actually read the article). But when I went looking for “American female soldier OCP uniform” (or something like that), this is what popped up in Adobe Stock: 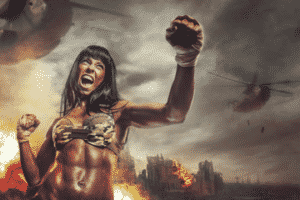 OK. So, I mean, there is definitely a woman in this picture. And she’s throwing a punch. And there are some buildings on fire in the background and some people fast-roping out of what appears to be an American Sea Stallion helicopter. And yes, the clothing that she’s wearing, such as it is, is vaguely OCP. There’s a whole lot of #’Murica going on in that picture, to be sure. But that…well let’s just say that isn’t really what we’re looking for. I knew that “American female soldier throwing punch Army uniform” was kind of a niche thing though so I wasn’t too disappointed when I didn’t find the exact photo I was looking for with such a narrow search.

When things got really interesting, and really eye-opening (in more ways than one) was when I widened up the search aperture and looked simply for “American female soldier.” This was one of the photos that popped up: 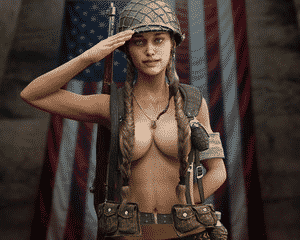 American flag…old-school American combat gear, not a bad salute. But between the two categories my friend stipulated—slutty or shitty—I’m pretty sure that we’re going to have to count this one in the former category, and we’re not that kind of site so I’m going to give this one a pass, too. 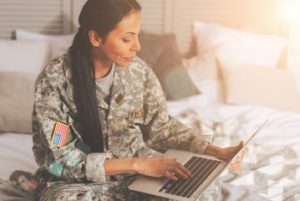 This one was titled, “military woman chatting on the laptop in bed.” Long hair, rolled sleeves, misplaced American flag…and what’s up with that US ARMY tape on the left breast? Black and white with gold trim? I don’t think so.

Many of the photos in the “female American soldier” category weren’t “soldiers” at all. For example, in this one, I can only hope that this is supposed to be someone’s spouse: 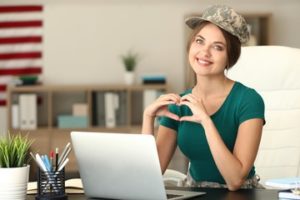 The dearth of great female art in Adobe is best exemplified when comparing “high speed” pictures of male models to their female equivalents. For example, my absolute all-time favorite picture in Adobe is this one: 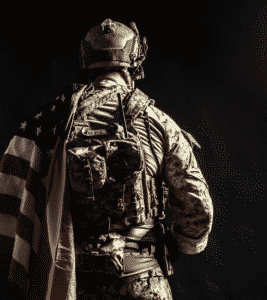 Modern military uniform, kit is squared away, cool-guy helmet, flag draped over the left shoulder and good lighting…this photo is money. I use it all the time.

…but here is the female equivalent of that same shot: 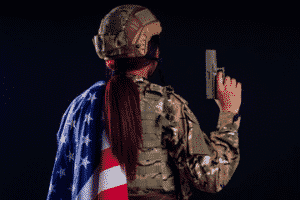 I don’t know what I noticed first, the poor trigger discipline or THE PURPLE FREAKIN’ HAIR. This one is definitely in the “shitty” category.

Now Adobe does have some very solid imagery of military females, much of which we’ve used in the past. Photos like these: 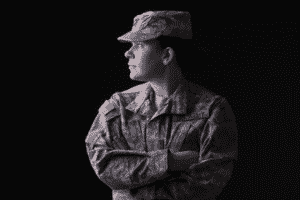 Patches are in the right place, good lighting effects, uniform looks good, I’d totally use this. 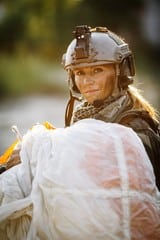 I like this one because it has a very “Special Operator” vibe to it. 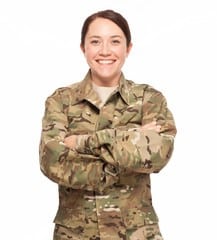 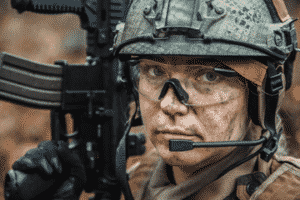 Also, many of the search results are just weird. For example, this also pops up when one searches for “American female soldier” on Adobe Stock: 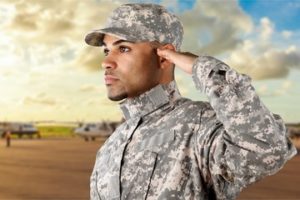 This is an American female soldier? “First of all, she’s a he, so…” Facial hair…no patches…mandarin collar popped, which NO ONE DOES, saluting—improperly—with the left hand. This guy isn’t just on the fail bus, he IS the fail bus.

And just to be clear, Adobe has its share of dorked-up looking dudes as well: 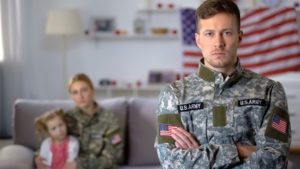 Before anyone gets the wrong idea, I’m not blaming Adobe for their lack of photos of bad ass modern female warriors. Most members of the armed forces are, after all, male. In fact if memory serves, only 20% of the Army is female. But I think we can do better.

And when I say “we, “ I don’t mean the stock art industry. It’s not their fault they have the photos they do, it’s ours. We—the Veteran Community—are not creating enough demand signal when it comes to positive portrayal of female vets. One of the reasons there is so much great stock art for male veterans is that there’s a lot more demand. That’s something that the Veteran Community can do something about.

I’ve spoken with several of my female peers about why more women vets don’t write about their experiences. Many do; there are numerous books by, and about, female veterans and several projects designed to help female vets tell their stories. But most don’t.  Why?

In speaking with several of my female veteran peers, including my own wife, the reasons are many. But many express a sense of inadequacy, either internalized or imposed on them by other veterans. Some women simply don’t think their accomplishments measure up, or at least people won’t want to hear about them.

I get it you didn’t do Medal of Honor-level stuff when you were in the military. The truth is, most of the rest of us didn’t either. Most of the rest of us can’t relate to kinds of things that genuine heroes do at home and abroad, because that’s not everyone’s shared experience. So share your own stories, don’t worry about anyone else’s.

But the only person who knows your story, is you. But you’re not in this alone. We can help you tell your stories, just like we did with dozens of female veterans over the years, including Kate. And you don’t even have to punch a cow in the face first.  You can hit us up at havokjournal@havokmedia.com.

This first appeared in The Havok Journal on September 20, 2019.