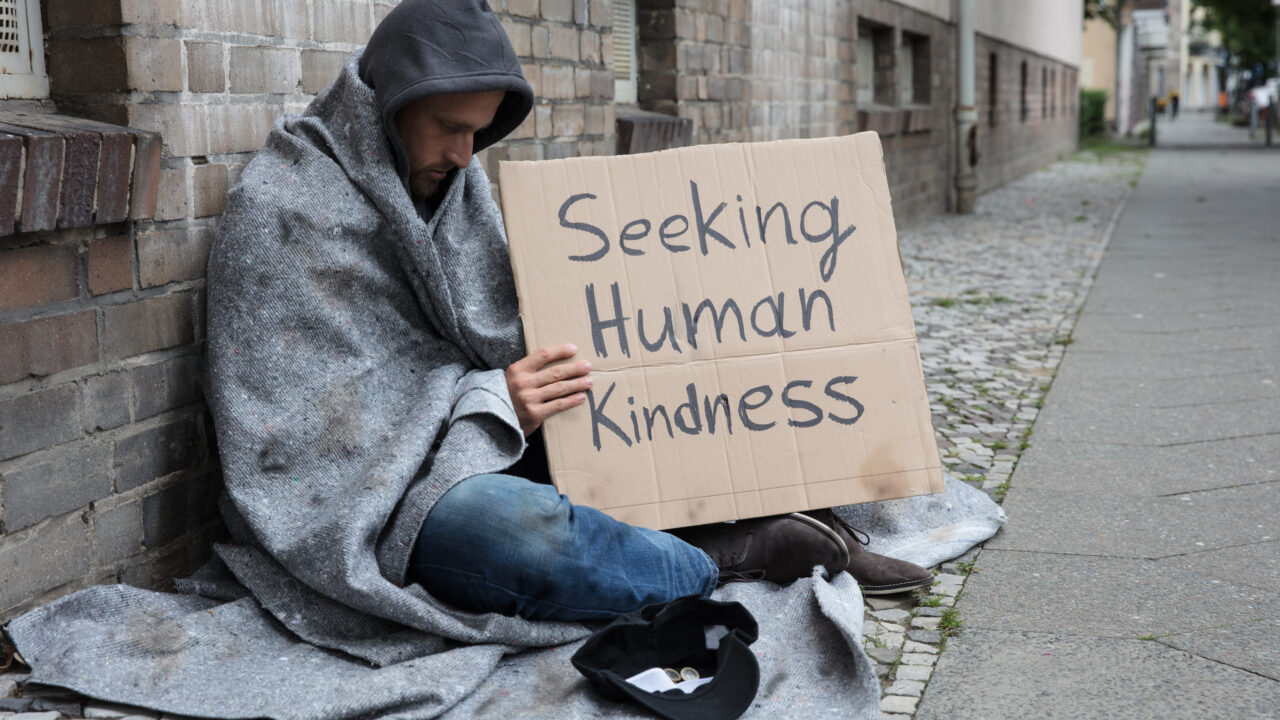 I saw a man shoot up heroin today. I stared for a few long seconds. He looked tired, war-torn. Like he’d seen his own future of predetermined misery. Awaiting his fate, drowning out the inevitable. Numbing what soon would be wounds and scars too much to bear. His hands were calloused, coated with dried dirt. Hands that looked accustomed to dragging along the city street.

I was in a suit and tie. He was in a tattered jacket with one pant leg ripped to the knee. We were a few feet apart, but the world separated us at that moment. He raised his head. I was met with faded, pale blue eyes. It was like looking into an abyss.

In another life, we might have talked for a few minutes. His name was Joe. He failed out of college. He grew up in a foster home. His father was an addict, his mother an alcoholic. He told me he didn’t have anything. No family, no future, no hope. I gave him some encouraging words and told him I’d be praying for him. I got up and walked away towards my meaningless 9 – 5.

I did see someone shoot up heroin today, but I didn’t stop. I said a small prayer and went on my way. Didn’t even have the mental strength to ponder it until now. I just thought of what most people assume when they encounter something like this – broken family, tough upbringing, failed school. Who knows? Maybe his name was Joe and maybe he did grow up all alone. Or … maybe he was a Kevin, Mike, or Charlie. Maybe he grew up with a large and loving family. Maybe he was the star athlete in high school, or computer science wizard. Maybe he graduated college top of his class and went on to work for NASA. Maybe … maybe … maybe … I could go on, but what’s the point? I’ll never know.

I was told that the worst part of humanity is our casual blindness to the despair of others. But is blindness casual? Maybe it’s deliberate. One of modernity’s defining features is Socrates’ dictum that the unexamined life is not worth living. For all its accuracy, maybe our culture has become too examined. Maybe the examined life has turned into the self-absorbed life, the self-indulgent life, the self-referential life. Maybe the biblical injunction “love thy neighbor” has become “love thyself, then thy neighbor”; A formula sanctioning a world of inward and endless self-love. “What filter should I use on my Instagram?”

Or maybe it really is casual. Maybe I just don’t have the bandwidth to process the suffering around me all the time. Maybe it’s just the impending tyranny of my own internal torture that impairs my vision and shackles me from seeing others’ despair. The number of times I’ve walked straight through a sea of homeless souls on the sidewalk – makeshift homes, part cardboard, part tarp, fleece sleeping bag coated with the grease of city streets, shopping cart filled to the brim, bottles, cans, someone’s take-out – and was overrun with impotence.

There are times when I stop. Walk in the nearest convenience store, murmur God bless, and drop an assortment of stuff. But in those moments, I don’t really stop. Their faces fade. Their anguish fades. I walk through blinded, not by their struggles, but by my own. Plagued with sheer panic as I attempt to siphon the self-pity. The job I hate, the mother who’s sick, the relationship that ended. The brokenness inside pierces my gut while the internal screaming gets louder and louder, like a symphony nearing its crescendo. It’s crippling.

Who do I help? Them or me? I’m selfish. Things could be worse. Until I wake up, and it’s me on the street. Sleeping bag, cardboard, tattered jacket, one pant leg ripped to the knee. Cancer won, the girl moved on, job terminated. Left to piece together the remnants of my own soul alone, with a syringe. Filtering out humanity’s suffering was not deliberate. It’s just that on my valiant quest to save everyone else, I’d forgotten about me.

How do people balance the desire to help others with the need to take care of themselves? Maybe it starts by undoing modern pedagogy that the two are mutually exclusive. In helping others, we help ourselves. And in helping ourselves, we help others – a beautiful symbiosis.

It’s erasing the naivety that misery’s existence can be permanently expunged. As much as we try, kids will still be murdered, bombs will go off and people will end up homeless. Life will hit some harder than others and that is the sad reality. But that doesn’t mean we should let the crushing and overwhelming weight of infinite worldly anguish and despair prevent us from trying to help the least of us. Smile, lend a hand, buy a meal. Kindness radiates in waves.

It’s removing the precept that introspection is for the weak and that being tough means being emotionless. We’re all a little messed up. We all live in glass houses and none of us have clean windows. Sometimes the seemingly happiest are the ones collapsing. Remember Robin Williams? Look inward, talk to someone, then get back out there and give the world the best version of YOU. Just don’t let the examined life lead to the unlived life, because maybe it’s not so much the unexamined life that’s not worth living, but the unlived one.

What do I know? Maybe I’m wrong. But after a year of self-pity and insurmountable internal torture, I did some thinking. For as much as this world convinced me into suppressing the agony, I finally looked inside. And right now, I feel more alive than ever.

James Sullivan is from Garden City, NY. Recently graduated from Harvard with a Bachelor’s Degree in Economics and Government, and now work in New York City. In his free time, he frequently writes about American culture and politics.