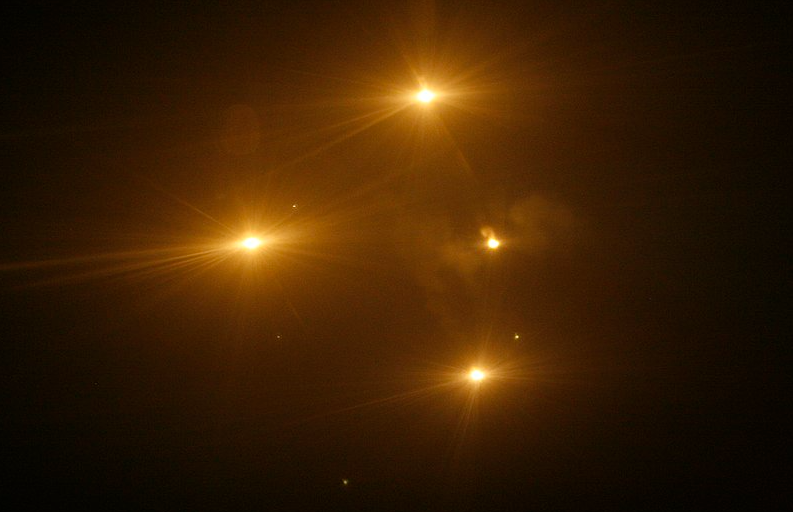 With Halloween around the corner, we thought our readers might enjoy a paranormal-themed article! This first appeared in Tales From The Grid Square (TFTG) and is republished here with Nick’s permission.

Nick is an active-duty Soldier with an interest in all things strange, unexplained, and paranormal. Based on personal experiences while wearing the uniform and conversations with other Soldiers; Nick created TFTG. The goal of TFTG is to collect, document, and share ANONYMOUSLY the “not normal” experiences of those who serve. Everything is anonymous, so people can tell their stories freely without ridicule or judgment.

During the twenty-one-year span of American and Coalition involvement, the skies in Afghanistan were busier and more crowded than ever before. The skies overhead were a controlled chaos from helicopters buzzing the mountaintops, to predatory drones stalking overheard, to satellites invisible to all but the most observant eye. But it was apparent something lurked in the skies overhead. Sightings of Unidentified Flying Objects (UFOs) and Unidentified Aerial Phenomenon (UAP) started to increase in frequency: Fast irregularly moving lights in the sky, ubiquitous black triangles silently floating above, and full-on encounters of the third kind. Dazzling and mysterious, were they advanced drones? Foreign adversaries? Or maybe true visitors from another world. If they are from off-planet: what do they want and why such interest in Afghanistan? Truly many more questions than answers in this case. With disclosure becoming more and more of a hot topic within our government, maybe one day in our lifetime we will have answers.

This was in Helmand Province at the end of 2011, Patrol Base Jaker in Nawa. It was one of my first times standing post on deployment by myself, we had just finished the turnover with 1/9. I was on post 2 that overlooked the very end of the bazaar and mostly fields/ mud huts.

It was the midnight to 4 am post shift (this was always when the weird shit seemed to happen.) I was looking out over the fields and a light/movement in the sky caught my eye so I looked up. It was actually 3 separate lights, moving in tandem with each other.

At first, I figured it was obviously a military aircraft. After watching it for maybe 30 seconds I realized the speed didn’t make any sense. As soon as I had that thought the three lights separated by a great distance instantaneously in opposite directions.

They separated by a huge distance in a millisecond. Once separated, they started doing their own thing but each one of them was covering unbelievable distances and making very sharp immediate direction changes that are simply impossible.

This went on for almost 45 minutes. Then all of a sudden the three separate lights came back together into formation just as instantly as they separated, and then just fucking vanished. Like instantly disappeared. I was completely lucid and I’m not delusional. I watched this intently the entire time. It’s one of the weirdest and most unexplainable experiences of my life to this day.

It was late 2012, probably September or October. My unit, B Co, 1-503rd of the 173rd Airborne was holding a small COP in Charkh Logar province Afghanistan affectionately called “the Charkh tank.”

We had access to this stuff called “IR dirt”– the idea was you lay it on the ground and it would glow under night vision goggles. You were supposed to be able to then track someone’s footprints via the NVGS if they walked through the dirt. So like a couple of board grunts, one night I and another SSG decided to try it out.

It was a cool clear night and you could see from one horizon to the next. The mountains surrounding the valley created a clear border to the skyline all around. Very few faint lights sprang up from the villager’s homes around.

Just as we finished “testing” out the new toy, I did what every infantryman has done with his NVG if given enough time, I looked up. There it was.

What I saw was five lights flying in a V formation moving from one horizon towards the other. They would switch positions in the V formation suddenly and seemingly instantly defying laws of physics from my point of view and picking up the exact same shape every time. The speed and ease with which they moved looked as though it was a spotlight being projected on clouds but it was a perfectly clear night.

It all lasted maybe ten seconds. As the objects passed overhead my friend sensed my excitement and was anxiously asking what I saw. Unable to describe it and knowing it would be unbelievable I slammed the NVG (a brand new at the time cutting-edge PSQ-20) to his chest and told him to look. He followed them for the rest of the sky to the opposite horizon. They disappeared with no sound, with no visible light, and never to be seen again.

We debated what to do with our information and quickly decided to check with our good friend who was also the Air Force JTAC. There were no aircraft in the area. That night we sat and wondered what it could have been. We had no idea and doubted we would ever know. It was pretty crazy. Still have no idea to this day what it was except for an “Unidentified Flying Object.”

This was an incident I encountered when in the Paktika province of Afghanistan in 2010. We had been there about 90 days and were comfortable patrolling most of the area into the southeast portion where this story took place. We had been tasked to support a battalion op and set up a screen to scoop any squirters during their operation. The night of the mission we were ready to go and everything was normal– until we convoyed out to our designated point. My BFT began experiencing issues but before I was able to pass off navigating duties it righted itself. Wonderful. Lowest bidder to the rescue!

We continue moving but as I rechecked my BFT I had the feeling our points had moved for some reason. I rechecked grids and confirmed we were correct. I shook away my feelings and we moved on. We neared the area where we were to set up and I just couldn’t shake the feeling that the grid was off. The terrain wasn’t matching up with my map recon but everything was still reading good so I again shook off the feeling after confirming higher.

We set up vehicles, radioed up and a handful of dismounts pushed out with the JFO. I ask the JFO about the grid for a 3rd time  I confirmed our location and that was correct. We began setting up our positions and as I pulled out my IR strobe to mark our position my skin started to feel like it was humming. I suddenly had a sense that something was above us. I looked up to see the full night sky of stars blacking out as something moved in front of them. It felt like a stadium closing its dome, the size of it was that big. We had helicopters on station but not in our immediate area and no fixed wing either to include drones. Whatever this thing was, moved at an impossibly slow rate. I grabbed my mic to radio up and that’s where time ended for me. When I ‘came to’ I suddenly found myself in a mud hut, it was daytime and obviously, I’d lost a lot of time. In my hand was the IR strobe I’d pulled out to mark that position, my DAGR is fucking loopy (what’s new?) and my MBITR is zapped (again, what else is new?).

No one else seemed aware of what just happened… whatever that was. Evidently, everything had gone to plan and we loaded back up. My truck crew also appeared to have no idea like everyone else but checking my BFT we are a full grid square from the briefed mission. No one was upset by this or thought it was wrong. It was as if everything went as planned. I was absolutely spooked.

For weeks afterward, I sporadically saw unexplained lights in the sky (which others also saw) which brought the same ‘humming’ feeling under my skin but with no loss of time. Years later when accomplishing my retirement out processing I was sent for x-rays to explain something in my right forearm. I was told it was probably shrapnel from an incident years prior. In my right forearm, they found what appears to be an object about the size and shape of a grain of rice with two dark ends. While it appears to be made of plastic I’m told it’s actually metal…. probably. I have no explanation for what happened. I never encountered another situation like that in Iraq or Afghanistan or anywhere else.

I’m still not not sure what happened but I don’t rule anything out. My memory of that time is completely gone like some edited piece of film from my memory. You see odd stuff in a career but this was the only thing I have no clue WTF it was. The op started around 0200 and when time started for me again it was morning around 0700. The thing in my arm could be shrapnel but I have shrapnel in other parts of my body and it doesn’t feel like or look like what’s in my arm.

INTRUDER IN THE NIGHT

I was deployed to Afghanistan in 2013 and was manning the front gate with one other guy who also witnessed this. The pictures are taken with my buddy’s GoPro through our night vision. We saw three lights hovering silently above a traffic circle for several minutes.

And when I say “silent”– I mean that it did not make a single noise even though it was maybe 200 meters away and 250 meters high. At this point in our deployment, we were very familiar with what various aircraft sounded like, as they would provide support during our patrols.

It was also invisible to the naked eye and we could only see it under our night vision. As soon as we decided to take pictures of it, it flew off. I recently looked at a map of where we were and approximately measured the distance it covered. It moved about 5-6 miles in maybe 10 seconds. I believe the three lights were part of one object.

“Nick” of Tales From The Grid Square is an active-duty member of the US Army and logistics officer. He has had a long-standing interest in the paranormal and is a self-proclaimed “paranormal military historian” (a term he made up). Several of his own experiences and experiences of his peers inspired him to start “Tales From The Grid Square,” where he collects and anonymously documents the paranormal stories of military service members. He hopes to elevate veteran/military voices and bridge the gap between the civilian and military. He has authored the book “Tales From The Grid Square Volume I,” a collection of 240 such stories from across the branches of the US Armed Forces as well as foreign militaries. You can share your own stories to the Instagram Account @Tales_From_The_Gridsquare or email: TalesFromTheGridsquare@gmail.com.