HomeCultureMilitarySpecial Forces and “Say Yes to the Dress”: A Lesson in Being Authentic 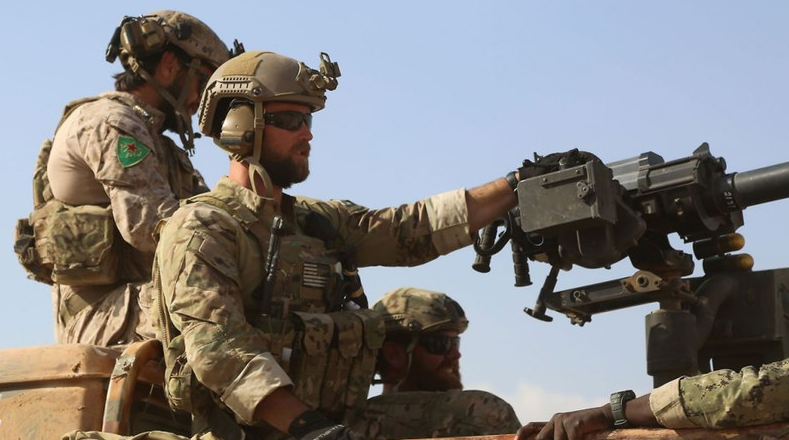 Sometimes, conservative thinking, conformity, and following an established protocol are not always the best approach…

After commanding a Special Forces company at Fort Bragg and transitioning to Foreign Area Officer, I had the privilege of serving overseas in a diplomatic assignment supporting defense cooperation initiatives in Croatia in 2000. It was a fantastic opportunity, one that afforded me the opportunity to help shape U.S. defense policy in that war-torn country. Croatia had suffered immensely over the previous decade in what the Croatian’s called “The Homeland War” and it was my hope that I could contribute to helping bring about positive changes in the country. I embraced the job, pouring myself into my new mission with enthusiasm, seriousness, and “singularity of purpose.”

This being my first assignment working in an Embassy, the aura of operating in a diplomatic environment created an overly conscious perception as to how one should comport oneself. An Embassy has its own unique culture and there exist certain expectations regarding personal demeanor, collegial relations, and professional protocol. This was new and heady territory for a soldier more accustomed to foot marches and flak vest than cocktail parties and tuxedos. Yet, this was the operational environment I found myself in and one that I sought to understand and effectively navigate. One event early on in my tour of duty helped me to learn an interesting lesson, one that would serve me well in future assignments and in life.

Conventionality is not always the “preferred course of action”

For those serving in an Embassy, the annual Marine Corps Ball is perhaps one of the most anticipated and celebrated events of the year. The Marine Security Guard Detachments around the globe work diligently throughout the year, preparing for this most sacred of events within the Corps, honoring its birthday. Steeped in tradition and lore, the Marine Corps Ball overseas is a fervent and sophisticated event, with high-ranking members of the Embassy, the diplomatic corps, and the host nation military always in attendance. But it can be also one of the most fun and enjoyable social activities of the year.

In the days leading up to the ball, my wife was deciding what to wear to the event. When she asked what I would be wearing, in a very matter-of-fact tone, I mentioned that this was an important diplomatic event, that it was considered a formal “Black tie” and that the military from the Embassy would either be in their Dress blue or Mess dress uniforms. My wife thought about it for a moment and then pulled out a dress she had purchased from the Base Exchange in Aviano Air Base, Italy a few months ago. “I plan on wearing this dress,” she said. As I glanced over at it, I was surprised by her choice…instead of a formal, black evening gown, she had selected something very bright and very pink! 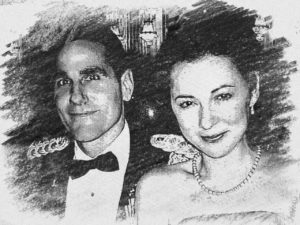 Don’t get me wrong, it was a very nice dress, elegant and certainly formal enough for the event but not the type of evening gown I had associated with a black-tie soiree.

Treading into unfamiliar (and risky) territory sometimes come with the job of being a soldier, but I was venturing into a domain where I clearly had no expertise and even less credibility… “A pink dress?” I said, trying hard to sound nonchalant, “do you think that will be appropriate for a diplomatic function?” Turning to face me, my wife, gave me a look that said, without actually saying it, “So…now we think we know something about fashion too!” She just smiled and said, “Trust me, this dress will work fine.” I tried subtly to remind her of all the dignitaries that would be present and the formality, diplomatic protocol and so on, and so forth, hoping to sway her opinion toward something a little more, shall we say “conservative.” But being an Army wife of many years, she was accustomed to me speaking my mind, and instead just went about her business, my efforts to interject thoughtfully ignored.

When the evening of the Marine Corps Ball finally came in November, we were giddy with excitement. The Marine Corps Ball’s abroad are electrifying events and we eagerly looked forward to it.  It was an evening to enjoy with friends and colleagues, both American and Croatian. As we entered the hotel ballroom and approached the receiving line, the place was already abuzz with anticipation. The men in their tuxedos or dress uniforms, the ladies in their elegant evening gowns, gave the venue an almost 19th-century romantic feel, like something from a bygone era.

As I did a customary survey of the room, I noticed most of the ladies were wearing very conservative, mostly black, gowns or evening dresses. I congratulated myself in my mind, and smugly thought “Ha! I do know something about appropriate attire.”

We walked through the obligatory receiving line, greeting the various dignitaries, and then at the end of the line were ushered toward the main hall. Just as soon as we entered the room, my wife and I were suddenly besieged by a small group of the local Croatian media. “Didn’t see that coming,” I thought. Initially, the camera and the interviewer turned to me, “fall back on your training” I murmured to myself, trying to remember back to some of the media training I had earlier in my career. So, I started into my “I’m a U.S. diplomat from Washington and I’m here to help” spiel. No sooner had I started, the cameraman and interviewer abruptly lifted and shifted from me (too boring-just another stiff Embassy official) and focused instead on my lovely wife.

It turned out this particular group was from Glamour Café, a popular Croatian television program. They had been invited to the Marine Corps Ball to highlight what was clearly one of the top social events of the year, and they were eager to profile some of the guests. They immediately and absolutely LOVED my wife’s gown and fawned over her, asking questions about who the designer was, was it expensive, where she obtained it, and so on. This went on for about 5 minutes as my wife very gracefully and modestly explained about the dress, downplayed that it was anything but store-bought and off the racks and how she felt it was nice to add a little color to these types of social events. As I stood in the background, I was in awe and very proud of my wife. She displayed humility and warmth while being engaging and even entertaining. After a few additional questions, the interviewer thanked my wife and said the segment would be aired on the local television fashion program that same evening. 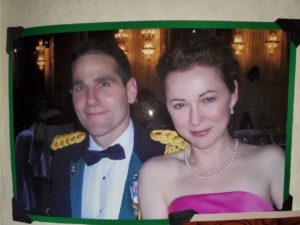 As the media crew moved on to interview others at the ball, I looked over at my wife, who just smiled and gave me that “I told you so look” that all husbands have seen some time or another. After making my way back from the bar (I needed a good scotch to wash down the crow I had just eaten) I handed a drink to my wife and said, “Wow, you were like a rock star! I never thought that would happen, how did you know that dress was going to be such a big hit?”

She said, “Well… I knew everyone else would be wearing black and dress conservatively, but this is November, it’s cold and dreary in Zagreb, this is a big social event and the Croatian’s love fashion, I just thought it might be nice to add a little color and maybe bring a little cheer.” She was spot on…

Know the rules, but be your authentic self…

Later, as I reflected on it all, I began to appreciate some of the finer nuances of this episode. There are times when you have to inject a little of your own style and personage into any event, to be your genuine self and not always conform to standard convention. I found that it is vitally important to understand and respect other cultures but I also found that people, including our foreign counterparts, appreciate the chance to see the authentic person. Be thoughtful and respectful, but be yourself…there is no greater rapport-building tool than showing that you are human. In the diplomatic and military community, our authentic selves are often hidden behind official facades that belie our true personalities. Protocol and conformity certainly have their time and place, but sometimes you have to throw caution to the wind, go with your gut instincts, reveal the human face behind the mask of officialdom and just say “yes to the dress!”