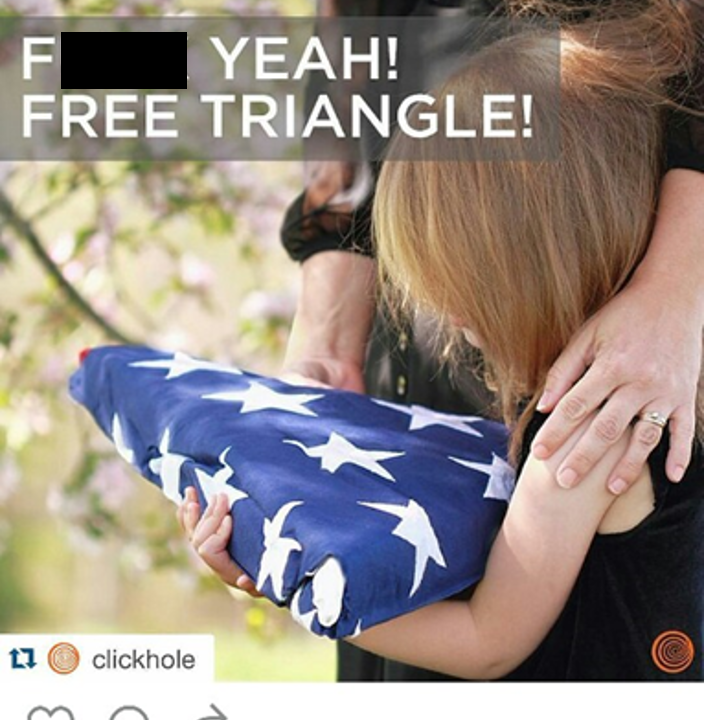 Earlier this week I was greeted by something so profoundly insulting and terrible, I almost dropped my phone.  It was a picture posted on ‘The Onion’s’ Instagram and sourced to ClickHole, one of their subsidiary brands.  The picture below is clearly of a young girl receiving a folded American flag, a ritual which is done at military funerals for the fallen – a regrettably common occurrence over the past fifteen years of war.

Before I unleash on this, let’s have a word about humor.  Most people don’t realize this but the military is all about humor – often gallows humor of the sarcastic variety – but many of the funniest people I know aren’t professional comedians, they are folks in uniform.  It makes sense.

The military, among other things, is a carnival of the absurd existing at the bleeding edge of the human experience.  Humor exists as a powerful coping mechanism which shaves the rough edges off situations which no one in their right mind would find tolerable and allows people to persevere and conquer.  As a leader, I don’t worry about the suck – I worry about when soldiers in the suck stop telling jokes and laughing.

Furthermore, I’m not easily offended.  I know my worth, I know my weaknesses and all of it is an open book.  Go ahead and fire away, I can handle it.  That is something of rarity nowadays.  The online military community seems to have fetish for outrage porn with entire legions of professional carnival barkers pulling out the latest e-type silhouette for the legions of ‘warriors’ to fling rotten tomatoes at…never getting the irony that for a group of people who pride themselves on their ‘toughness’ and pissing on millennials as being crybabies, they are the ones often crying the loudest.

But this event, this time, deserves your outrage.  It deserves to be chased down the streets with pitchforks and torches, locked into the abandoned slaughterhouse at the edge of town, and incinerated with incandescent righteousness.  It deserves this fate because the callousness demonstrated here crossed a line which should never be crossed.

You can burn my flag – go ahead, I fought for your right to do so and it is just fabric.  You can march in front of my base and scream insults at the gate – fought for your right to assemble and demonstrate.  You can call me a baby killer, a torturer, a war criminal, whatever…none of those things is true and because of that, they just bounce off.  I have to care about your opinion in the first place in order for it to harm me.

But this, this filth attacks our families.  It makes light of a little girl’s grief, a mother’s broken heart, a family cast adrift by the violent death of their loved ones continents away.  It doesn’t even have satire value – and yes, we get to make that determination because it is our families you attacked.  It is such a horrible thing because it attacks innocents at their most vulnerable moments and that is unacceptable.

I see the Instagram picture has been taken down (it still is on ClickHole) but you don’t get off that easily, Onion.  Once upon a time, you crossed a line and you issued a rare apology and promised you wouldn’t do it again.  Well it happened again.  Perhaps you as an organization didn’t mean this and this is the work of one profoundly disturbed individual whose sense of couth and grace was destroyed because mommy didn’t buy him an EZ Bake Oven and now he is holding it against the world.  Fine, people who have disgraced themselves so badly were usually expected to lock themselves in a room with a straw mat and sword and do the honorable thing.

(To see The Onion’s response to this article, proceed to the next page)