HomeCultureMilitarySoldier Talk: “You’re Not Gonna Believe What I Just Overheard” 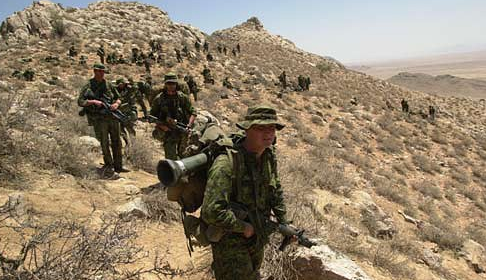 I was reading Nick Perna’s article about “The end of the conversation.” It is absolutely hilarious and reminded me of the fucked up conversations I have taken part in, or were privy to hearing.

My previous article about my Battle Kin in Bosnia is where a lot of the messed-up conversations come from. It was a pretty quiet 7 months in Bosnia, so we talked a lot. Now, remember this was before the information age of looking it up on your phone. This was 1997 and very few people in a rifle company had access to computers, maybe the OC (officer commanding) and the company clerk. Maybe.

We talked about everything from pre-deployment parties some of us could barely remember, to golf, hockey, girls we dated, and chicks we hooked up with. This was always interesting because without fail someone would mention a girl’s name that they hooked up with and no less than two other guys will chime in that they or someone they knew in another company had carnal knowledge of the same girl. There were a few Army groupies that made the rounds in the barracks or as we lovingly referred to them: “The Shacks.” Hell, if the shacks offered frequent flier miles, some of these girls would have been able to travel around the world, twice.

There was talk of getting out of the Army and perusing other options, like school or herding goats. The range of options was astronomical. Some were going to write books, some were going to get new trades, and others talked about getting married. It ran the gambit.

Geek talk over a spirited game of Risk, about playing Dungeons and Dragons and who was going to be Dungeon Master. Which lead to someone talking about building dungeons as a playroom for them and their wife.

There was a lot of remembering when this guy did this, or that guy did that. There were stories of the Vampire and the Ninja, which were good laughs for all. We actually had a guy in the Company who claimed he was a vampire. What gave him that idea, no one knows. Another was a ninja. He could kill us in the blink of an eye, or so he said. The vampire only did the midnight shift on gate guard so he didn’t have to be out in the sunlight. He was a strange dude, to say the least, and the Ninja would never show us any of his moves because they were too deadly for us mere mortals.

One night, one of the boys sat a bunch of us down and read to us from the Marque de Sad’s book about the origins of S&M. A silence like no other fell over the bay where 20 plus soldiers called home for the tour. For those 10 minutes, no one else spoke, till one guy in the back yelled “That’s fucked up!” Laughter ensued and that was the end of storytime.

We talked about taking leave and heading home and the girls we were gonna hook up with or the ones we didn’t hook up with because she was someone’s sister. The lamest no hook up was a buddy of ours who had a girl take off her panties and give them to him as a gift. He didn’t hook up with her?! We couldn’t believe it and he almost lost his status with the group!

The same guy whilst on CP (command post) duty was point-blank told by the OC to stay away from his blow-up sheep. Yes the OC had a blow-up sheep.

After hearing that conversation, it was my turn in the phone booth to call home. First words to my future wife: “You’re not gonna believe what I just overheard?”