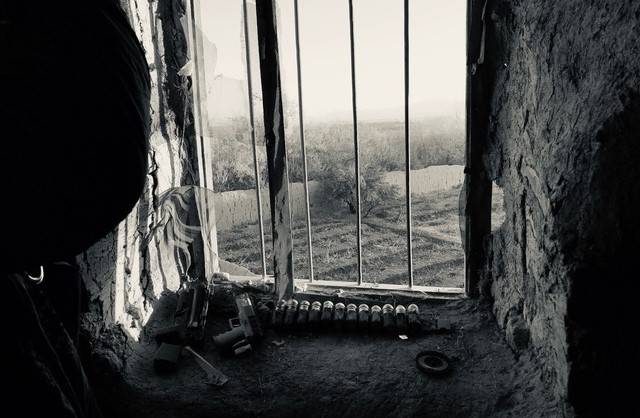 The following is part of a collection of short stories titled Insha’Allah: Short Stories of the Long War in Afghanistan.” Chris began writing this collection while deployed to Afghanistan in 2018. He wanted to share the lesser-known side of the war with friends, family, and, one day, readers.

His time in country had ended just as abruptly as it began. Now, only a few days after his last mission, he was crammed into the folding seat of a large C-17 aircraft flying back across the world at 30,000 feet AGL.

The plane would stop in Europe to refuel overnight, and they would touch down at their base the next day. He would be home just days after having a near-miss with a rocket-propelled grenade. He remembered the team as they stood outside a local hut, preparing to make the long walk to the HLZ. The rush of wind and sparks split the cold night in two just before them. Pieces of earth flew everywhere as they dove for cover.

He and the rest of the members from his unit spent just over 18 hours in Europe where they taxied downtown to sample the local fare and drink the local beer. Walking through the cobblestone streets of the square from one establishment to the next, he felt very far away from anything. They had stopped in the same city months before. The foreign streets seemed exciting and vibrant then. Now, as he walked, the novelty stores and window sales seemed silly and useless.

The following day he rolled out of the lower bunk in a haze and shuffled to the bathroom, where he showered the beer from his pores. After some time he joined the others, dragging his bag of belongings with him. He took his small seat on the plane yet again. Once at cruising altitude, everyone on board found a piece of real estate inside the cold aircraft to lay their sleeping pads or hang hammocks between the storage containers. The others were silenced by his earphones, but he could read their words.

“Oh, man. One night our helo almost burned into the HLZ!”

“Man, I hope we make it back before the baby comes.”

He said nothing, but the others did.

He lay suspended four feet off the ground, staring at the ceiling and waiting for his Ambien to whisk him to sleep. He traced the electronic cables and air tubes and hydraulic lines with his eyes for hours, dozing in and out of consciousness.

Back in his own bed, in his own house that was full of his things, he lay still, staring at the wall in the complete darkness of his room. Through the bay windows, he could hear leaves rustling across the yard outside. The noise startled him at first while he lay silent in his bed.

His heart beat faster and his ears became warm as he tried to listen intently to the noise. He imagined a hunched, black-clothed burglar tiptoeing through the grass. He lay there listening, mildly on edge, until he drifted off to sleep.

He knew he was awake at some hour in the night, but he never opened his eyes. With his eyes closed, he resided in a different world. He was awake, but he dreamed of the last half-year. Five days ago, he was walking through ice and snow in a faraway village where he and his team had taken fire all through the day.

He lay there motionless, feeling the breeze of the ceiling fan, but he was still someplace else. The rocks and sand crunched under his feet during the three-kilometer walk from the HLZ. His shoulders and lower back ached and throbbed from the weight of his bag.

He was crouching on a rooftop while his eyes were closed in his warm bed. He was squinting through the rays of sunlight, looking for muzzle flashes of sniper fire that were cracking overhead. He and the two other men on the roof contorted their bodies to fit behind the small sandbag wall. They scanned windows and rooftops in search of the one man who was keeping them frozen with a single shot rifle.

“Just give me something to shoot at… Anything.”

He was bent over a patient who was struck by shrapnel from mortar fire that missed their position. The elderly man wouldn’t stop bleeding from the small holes on his back. He tried gauze, drugs, and pressure dressings, but nothing worked.

He inserted a chest tube into the patient’s flank, allowing the man’s lung to re-inflate. Even with a heavy dose of narcotics, the screams were stifling. His pants were still painted in the dried blood, resting in a duffel bag in the garage.

He and his tattered boots were still in that village, curled around the rung of a rickety ladder so he could see the bombs fall from the sky over the courtyard wall. Everyone erupted in excitement when the building across the dirt road exploded with violence and smoke and fire. Minutes before, machine-gun fire had peppered their position from that building just two hundred meters away. Lying there in silence with his eyes closed in the room of the quaint brick house he owned with the large oak tree, he wasn’t all the way home.

Imagining the conversations he would have now, he cringed. The thought of useless words and potential talk of mundane middle-class problems haunted him. The empty chatter of loan percentage rates and lawn care and new menu items at old restaurants and pictures of places that people would only talk about but never visit were what rattled around his brain. People discussing the remaining balances on their mortgages or the roast they cooked once that fell off the bone and their hypertension and medications; these were all things that just didn’t matter any longer.

It wasn’t the war or the violence or death or loss that crept around inside of his head; it was everything else. The silence in the room was similar to when he would pull security in the cold night or sit on the HLZ waiting for the helicopter ride back to camp after a mission.

It was similar but different and he would lie there, unmoving, until his alarm would finally ring, and he would shower and get dressed and make coffee before driving to work in a line of cars on a sunny road as if nothing ever happened.

This first appeared in The Havok Journal on September 17, 2021.