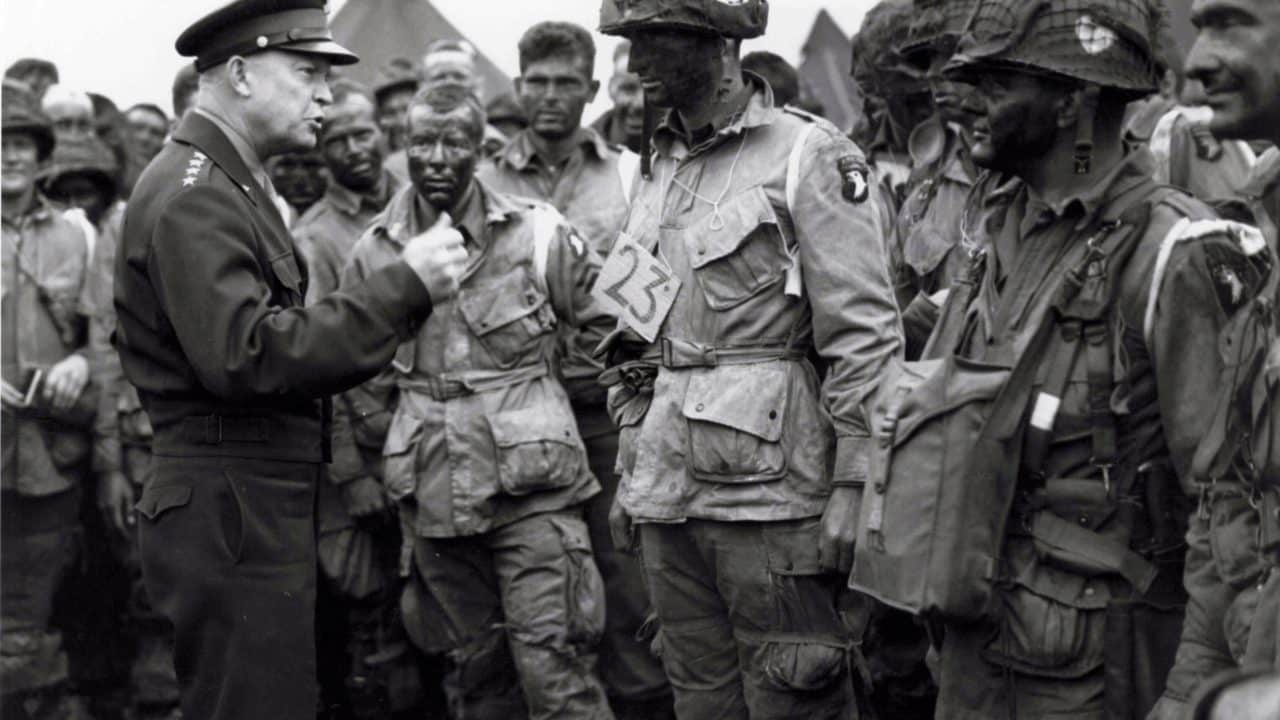 On May 29, 1944, the commander in chief of the Allied Expeditionary Air Forces, Air Chief Marshall Trafford Leigh-Mallory, expressed his concerns to General Dwight D. Eisenhower about calling off the parachute operations associated with Operation Overlord. Leigh-Mallory warned Eisenhower that he forecasted “the ‘futile slaughter’ of two fine airborne divisions, whose casualties he predicted might run as high as 70 percent.”[1] But Eisenhower knew without the airborne, the operation was incomplete.

The Supreme Allied Commander already planned out the invasion into the Nazi’s Fortress Europe. Ike knew without the airborne, the flanks of the beaches were exposed. American units landing at Utah and Omaha had to establish themselves, push further inland, and speed their advance off the beach.  Someone had to occupy the German reinforcements, specifically Rommel’s Panzers. After the war, General Omar Bradley gave high praise to the Airborne units. He noted, “these two superb divisions landing in full strength [were] decisive in seizing the limited egresses from Utah Beach and throwing the enemy into general confusion.”[2]

The noble American Paratroopers answered the call, jumped into the dark Normandy sky, and kicked off the “Great Crusade.” They liberated Western Europe by securing the causeways and fixing the enemy for the rest of the invasion force.  For this particular job, the Army sent some of its best. Through their ingenuity and tough training, the young men of the American Airborne created a courageous culture and identity that bred success on the battlefield. They proved this fact, exemplified by units like the parachute test platoon, the “Filthy Thirteen,” and Easy Company, 2/506thParachute Infantry Regiment, against incredible odds in times of combat.

John Keegan argues each of the Armies in Normandy in 1944 acted as “a mirror of its own society and values.”[3]  If the United States Army was a mirror of American society, the Paratroopers represented some of the finest Americans the “Greatest Generation” had to offer.[4]  Those who joined the United States Airborne all volunteered for years full of hardship in training, and ultimately war. They wanted to be part of a new, elite unit the Army formed to meet the needs of the military and the world at war.  They were the greatest of their generation and represented what the entire American generation of WWII stood for: innovation, courage, grit, and selfless service.

Some ignorantly doubted America and its ability to contribute to the allied war effort.  Among these was Adolf Hitler, who remarked after the Pearl Harbor attack, that he didn’t “see much future for the Americans.”[5] The country was years behind many of the foreign countries at war in training, experience, and equipment. But the nation also possessed a sleeping behemoth in an economy ready to mobilize in support of a major war, with a manpower reserve of over 9 million unemployed workers.[6] The United States was primed for action after its prolonged depression. The attack on Pearl Harbor armed the Americans with a resolve which enabled the United States to recover from its hard times and realize its potential.  Winning the war in Europe and the Pacific became the focal point of the country.

From the ranks of this society, a group of volunteers stepped forward to become the elite. They were a symbol of hope and justice, descending from the skies to search out and destroy two of the “most powerful and ruthless military machines ever assembled, instruments of conquest in the hands of fascist maniacs.”[7] The American paratroopers represented the American stereotype of the time. They were young, innocent, brave, and committed to doing their duty during a time of war. Even though most of the Paratroopers lacked experience in combat, because of their innovation and courage, they overcame great odds when others believed their future to be bleak.

This first appeared in The Havok Journal on June 1, 2019.