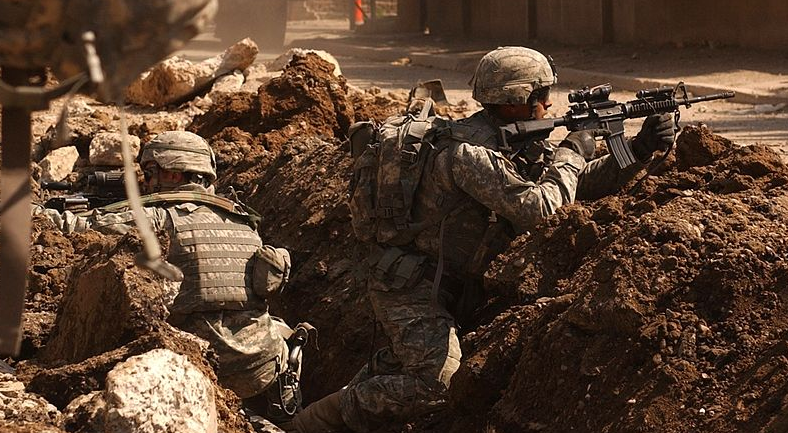 It was in the middle of the night in the cold Iraqi desert. Sounds funny to say cold desert. The Praetorians and Spartan 6 were conducting a combat patrol during an Iraqi election. Every time an election came around in Iraq, it was met with violence and intimidation from various terrorist groups throughout the country. Our mission that night was to ensure the ballots made it through our Area of Operations (AO) without any problems.

One of the gunners informed us that there was someone down the road digging at the side of the road. As we moved toward him, he ran off. We gave chase but lost him in one of the local villages. We ended up clearing all the mud huts in the village. As we went through each hut, I would order the occupants to keep their hands where we could see them. Unfortunately, we were unable to find this person. We went back to the area where we initially saw him and saw the IED he was assembling. It was safe to be close to it since it hadn’t been completed. We called in EOD to get rid of the device. 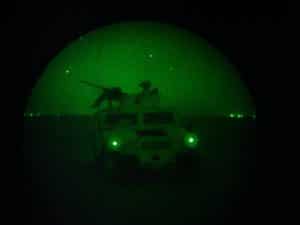 I walked around with my fellow Praetorians as Spartan 6 was talking with the prison warden near Mosul. I kept my eyes and ears on the Iraqi Police (IP) walking with the warden and Spartan 6. Spartan 6 was using a local interpreter at the time and I purposely kept quiet just in case I was able to gain any intel from unsuspecting IPs that didn’t know I spoke Arabic. A male subject walked by me with a Glock pistol in his hands, hiding it in the small of his back. I walked behind him, yelling out to him in Arabic “STOP. DO NOT MOVE ANOTHER STEP.” He froze in his tracks. I told him to drop the gun and step back before I shoot him. He complied. The warden quickly shouted that the male subject was one of his IPs. He was part of his protective detail.

Could that have been a possible attempted assassination of Spartan 6? Was the IP an Al-Qaeda Terrorist that made it into the IPs? So many questions were going through my head. He was eventually identified and let go.

There were times I suspected certain Iraqis I spoke with were there to do more harm than good. I found it frustrating that the Iraqis did not have a concept of fighting for their country. They would fight for a religious figure, dictator, or ideology. They did not understand the concept of persons of mixed races and religions fighting for each other and their country.

One day, while we (Spartan 6) talked to some Iraqis, I pointed out that our whole squad was made up of people from all races and religions. I explained that we fought for each other and our country. 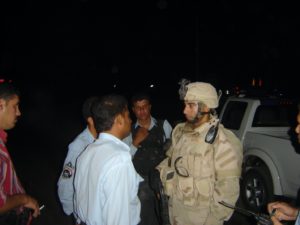 I was asked several times by the Iraqis why I joined the U.S. military. My response was always the same: “I JOINED TO HELP AND SEPARATE THE BAD ARABS FROM THE GOOD ONES.” It’s something I needed to do when the U.S. went to war in the Middle East. I knew my country needed someone like me. American service members were about to step into a world that would be tough to understand. 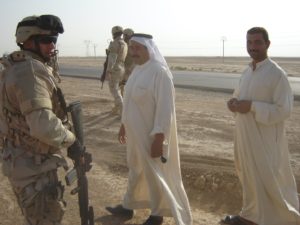 Laughing with some Iraqis

I called home one day and spoke to my sister. She told me of how this man in a pick-up truck tried to run my mother off the road. She dresses in traditional Middle Eastern clothing and has a thick accent. A thought flashed through my mind: “Why the hell am I out here fighting for a country that doesn’t care about my culture.” I was angry that I faced backlash over joining the U.S. Military and fighting in the Middle East within the Middle Eastern community. To me, I was surrounded by “enemies” on both sides of the pond. Whether the enemy was racism or terrorism, I was surrounded by it. Racism wasn’t just from a fellow American but also from those from within the Middle Eastern community. Mind you, at my time in war, I was a green card holder and not a U.S. Citizen yet. It wasn’t until a few years later, after INS found my lost file, that I became a U.S. Citizen.

This first appeared in The Havok Journal on June 2, 2020.

For years, Ayman has seen the trend of lack of training in policing. Whether it’s budget cuts, political enemies, or ineffective policy, Ayman has made it his mission to bring innovation, unconventional policing methods, and to have those tough conversations and instructions to assist law enforcement to better relate with and advise communities.