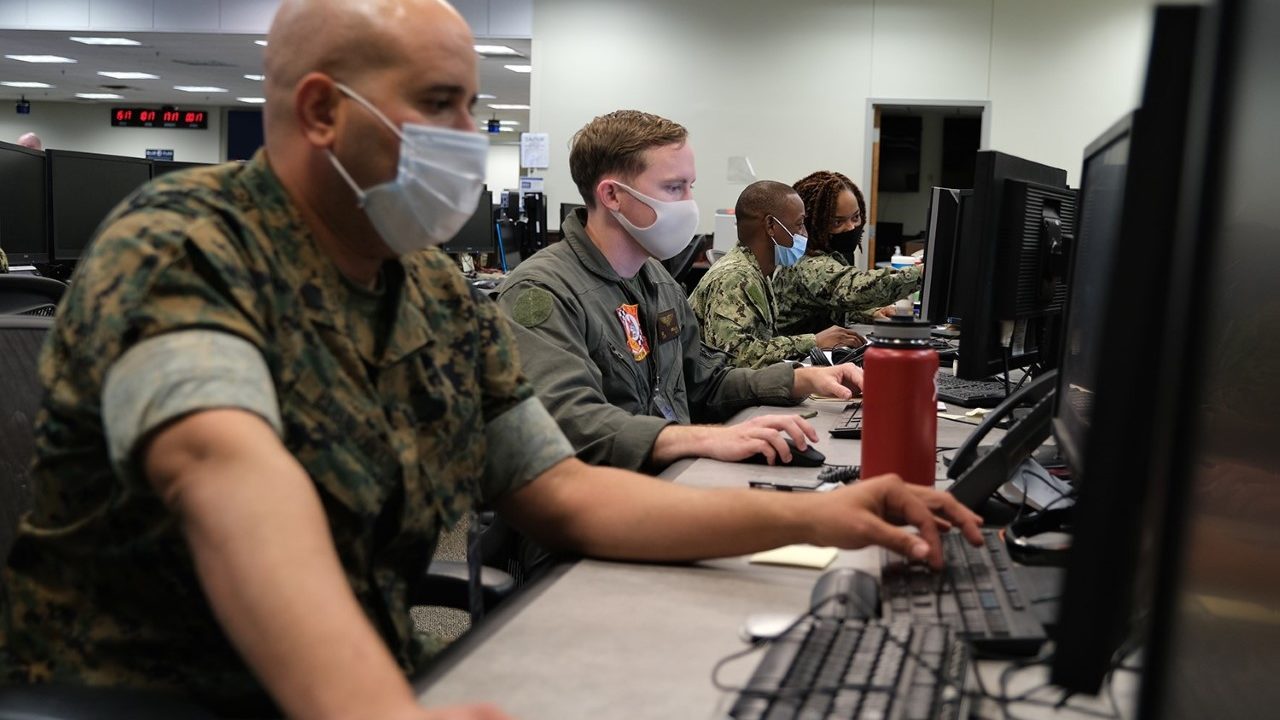 A bi-annual event, NLSE provides a training and experimentation environment that leverages the integrated fighting power of multiple naval forces to share sensors, weapons, and platforms across all domains in a globally contested environment.  NLSE 20 was canceled due to the COVID-19 pandemic, so those training objectives were rolled into NLSE 21, resulting in a massive exercise, including 25,000 U.S. Sailors and Marines across 17 time zones.

In order to meet the unique challenges of supporting multiple AOCs, the 505th CS is configuring and maintaining two Theater Battle Management Core Systems, two Global Command and Control Systems, and collaborative systems (voice, chat, email, etc.). Once configured, these systems, coupled with network connections, support USEUCOM and USNORTHCOM AOC Replication Cells and their respective Exercise Control Groups endeavors. The support provided by the 505th CS allows AOC RC controllers to push real time updates for air tasking orders and airspace control orders to theater representatives and ensures a valid common operating picture is in play.  Combined, this joint team replicates the full spectrum of airpower to tens of thousands of U.S. Sailors and Marines, testing how the services will fight across vast distances as they prepare for near-peer conflict.

In supporting the exercise, the 505th CTS is helping the USN and USMC apply concepts such as Distributed Maritime Operations and Joint All-Domain Command and Control to ensure a ready and superior force in a high-end fight.

“As the mission of the 505th CTS is to plan and execute realistic scenario generation and replication of operational-level environments in the application of JADC2, our support to NLSE 21 affords our team the opportunity to help our joint partners shape their approach to the same end,” said U.S. Air Force Lt. Col. Aarron Cornine, 505th CTS commander.

“I couldn’t be more proud of the 505th CTS team,” Cornine added.  “From our enlisted, officer, government service, government grade, and contract support personnel, all members have been working toward delivering a successful exercise in order to provide operational warfighters with the tools to integrate among components and dominate in near-peer competition.”

“Given the realities of the current global situation and the return of great power competition, the work of both the 505th CTS and 505th CS has never been more important in advancing our operational command and control capabilities across the joint force,” said U.S. Air Force Col. Aaron Gibney, 505th Combat Training Group commander, Nellis Air Force Base, Nevada.

NLSE 21 is both a live and virtual training exercise. While three dozen USN units participate live in the Atlantic and Pacific oceans, more than 50 will join the exercise remotely, including personnel from all three USMC Expeditionary Forces and U.S. Sailors from the USN’s Second, Third, Sixth, Seventh, and Tenth Fleets.

Throughout the 20-day exercise, members of the 505th CTS will replicate the air component 24 hours a day, seven days a week, providing a realistic operational training environment to joint partners. NLSE 21 is part of an ongoing series of exercises that demonstrates the U.S. Navy’s ability to employ precise, lethal, and overwhelming force globally across three naval component commands, five numbered fleets and 17 time zones.