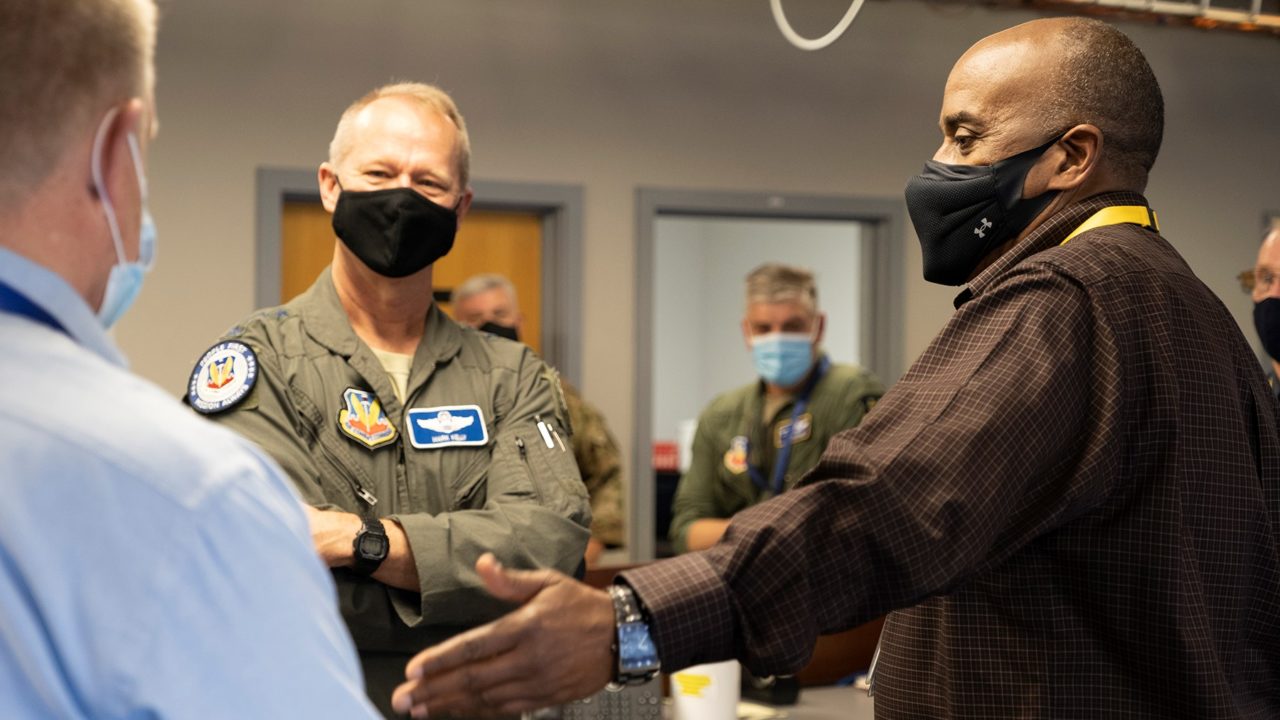 See below for photo information

During his visit, Kelly toured the 505th CCW along with Chief Master Sgt. David Wade, command chief of ACC, to familiarize themselves with the wing’s C2 mission and the enlisted, officers, and civilians who execute its complex mission.

Mr. Paul Lux, honorary commander of 505th CCW, and Ms. Cindy Frakes, honorary commander of 505th Test & Training Group shared how the ties they built during the wing’s last tour as part of 70 members from five Military Affairs Committees in the local area, prior to COVID-19, increased the proactive community voice for the 505th CCW and its mission.

Wade and Kelly learned that the 705th Training Squadron is the focal point for advanced Air Operations Center and Air Force Forces education and C2 process improvement. The squadron is launching the first Multi-domain Warfare Officer Instructor Upgrade Training course, which will begin in the next few months.

The leaders learned more about the unique C2 mission contributions of the wing’s units at Hurlburt Field, Florida, and the rest of its 13 geographically-separated units.

At the next stop, Wade and Kelly learned about the Advanced Programs’ building modernization efforts to enable the wing’s expanding missions. Despite these modernization efforts, they were briefed the current facility has been operating beyond capacity, which is why a consolidated Sensitive Compartmentalized Information Facility/Special Access Program Facility is the wing’s number one priority in the Area Development Plan.

Throughout the tour, Kelly seized several opportunities to recognize several of the 505th CCW’s best and brightest innovators for their exceptional performance.

The tour’s final stop was the 505th TRS, the gateway for initial qualification training for all geographic and global Air Operations Centers. The squadron demonstrated how they train an operations team to oversee and ensure the general’s intent/directive is carried out from decision to action. While in the combat operations center, the leaders witnessed the team concept as each member carried out his/her responsibilities as dictated by the chief of combat operations during a training scenario that included a mock missile attack on Luke AFB, Arizona.

“It was great to host COMACC and Chief Wade,” said Col. Richard Dickens, commander of 505th CCW.  “We have a lot of high-performing Airmen that are valued members of our team, so seeing them get an opportunity to brief our senior leaders and demonstrate to them how they’re accelerating change was very rewarding.”