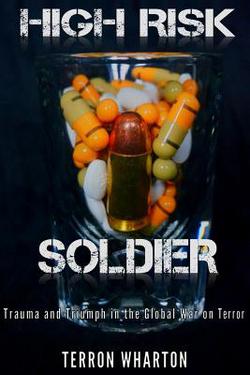 I decided to purchase High Risk Soldier for two reasons. First, the cover art drew me in: a shot glass filled with pills and a 9mm round. The imagery was powerful.  As a combat veteran, I knew exactly what that imagery symbolized. Second, Major Terron Wharton and I were classmates at West Point. We did not have classes together but we knew of each other. It is cool to see a classmate become a published author, 11 years after we threw our caps in the air.

As Terron mentioned in an interview with The Havok Journal, “If it isn’t raw, it isn’t real.”

High Risk Soldier chronicles Terron’s growth from Platoon Leader and Executive Officer in the “wild west” days of Iraq 2006-2008, to a Staff Officer in Iraq 2009-2010, and finally as a Company Commander in Afghanistan 2012-2013.

Do not be fooled. This is not just another war memoir.

Terron speaks candidly about controversial issues facing the Army Officer Corps today, namely post-traumatic stress disorder (PTSD), alcoholism, and suicide. He faced those issues head-on, and won. Yes, he writes about his own suicide attempt. It is one of the most difficult chapters to read, but what follows on will likely enrage any person of conscience.

He details the struggle of trying to get mental health care from the Army medical system and his chain of command.  Terron faced unsupportive commanders, apathetic health care staff, a myriad of prescriptions, and broken relationships. Love, from good mentors, close friends, his fellow soldiers, and himself brought him back from the brink.

I thought back to times I had paid for mental health care on my own dime, without anyone knowing. Many others, I’m sure, have done the same. It is a hard place to be. You don’t trust your boss to tell him your struggling, every gun is needed in the fight and to go to the combat stress clinic is to be seen as a pacified sissy. I’ve been there. I’m sure many others have too.

High Risk Soldier was the first book to bring back the sights, sounds, smells, and emotions I felt as an infantry platoon leader in 2006. Gunfire, IED explosions, cheap cigarettes, burning human waste, burning human flesh. It all came rushing back. I laughed, I cried, and I got fucking angry. A great book does that.
I finally unpacked the container of combat in my mind. I didn’t have to compartmentalize the past anymore. I’m a Reservist now, working full time as a civilian in a great job in a beautiful city. High Risk Soldier helped me acknowledge my own experiences and release their control over me. A great book does that.

Civilians and family members of soldiers should read this book too. It is a true account of the boredom and chaos of combat, the bonds formed between Soldiers, and the agony of losing friends. It is about regaining the capacity to love oneself and others, and the meaning of real leadership.

Generals and politicians should read this book to understand what combat does to good people. They must understand the emotional and mental cost of going to war.

It should be on every reading list from the Chief of Staff of the Army on down.