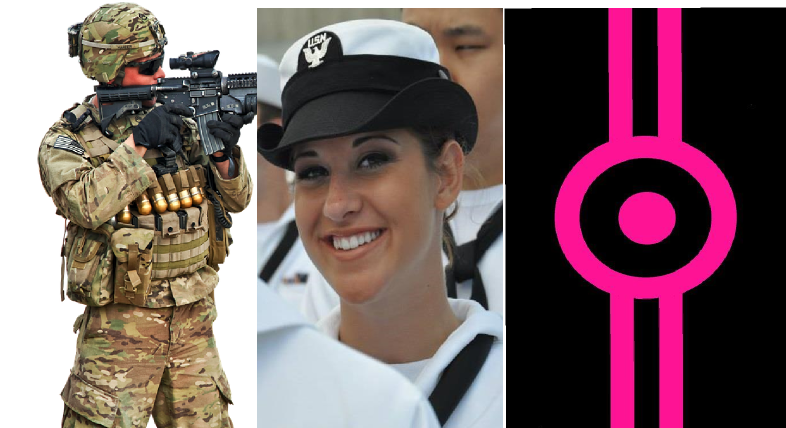 As it turns out, it was not a great idea.

My second husband, my forever husband, had to do a lot of convincing for me to go out with him once I learned he was in the military. Thankfully, his combination of hot dorkiness and mechanical ability won me over. (I’m a sucker for a guy who can quote from terrible B movies while changing the brake pads on my car.)  While I’m making myself sound like the reigning queen of Dependaville, my marriages across two different military branches, from the spouse of an E-nothing to the spouse of a senior enlisted service member, has given me a front row seat to behaviors that may not be as pervasive in the civilian world.

And as we all already know; service members are an exceptional group that make up only a small percentage of the United States population.

So, what is it about that small percentage that has such a fondness for swinging? And no, I’m not talking about from vines over the motor pool; I’m talking about spouse-swapping, and/or willingly including other(s) in the sexual intimacy between spouses or committed couples.

Or maybe, it’s not as common as I’ve been led to believe and I just seem to attract individuals who are comfortable verbally sharing certain aspects of their lives with me. Which is cool, but just so everyone is clear, I can and probably will use anything you say as article fodder. But I won’t name names. . . Karen.

According to a study performed by Jacey Eckhart, a former Director of Spouse and Family Programs at Military.com and a military sociologist, military members who marry young do so on average around the age of 22. Which is four years younger than the average age for a first marriage for their civilian counterparts.

Perhaps then, this taboo tango has something to do with the young age and curiosity of service members that marry young?

After research that was generally executed by speaking to a handful of supposed sentry swingers and websites that I had to erase from my browsing history, I found the age of the average military swinging couple was less of a specific age bracket and more of a bell-curve, although, the more juvenile Joe was less likely to be involved than the mature military member. I had a hard time finding irrefutable facts. The websites and forums I visited worshipped their privacy most of all.

Like Valtrex, this didn’t really clear up anything, so I decided to reach out to Mrs. Eckhart, the aforementioned military sociologist, for her thoughts on the matter. She replied: “Self-reports of sexual practices are notoriously unreliable. The research seems to suggest that sex is a topic people tend to lie about—either denying things they did do or exaggerating things they did not do.”

So, Seaman Schlong-Dinger and spouse didn’t engage in some serious sexy-time with Captain Coochie-Hallow and his wife?

But I’m starting to think that swinger’s clubs are a lot like Fight Club. You don’t openly talk about it.

If there are, in fact, an exceptional number of swingers in the military and it isn’t just people who are way too open with me about their personal lives, then you can partially blame (or thank) World War II pilots. According to this article at Psychology Today by Christopher Ryan, PH.D. and the book, The Lifestyle by Terry Gould, pilots and their spouses started “sharing” each other at parties because they knew that a third of them or more weren’t coming home at the end of the war. The swapping was a way to ensure that the wives of the deceased were still going to be taken care of by the community.

I guess in more ways than one.

I have all kinds of questions now, but mostly I’m wondering about Maverick and Goose’s familiarity with one another.

While swinging is far from a new concept, and most certainly not invented by flirtatious fighters, the act is taboo for those who participate in (or out) of uniform. While the UCMJ doesn’t directly say “thou shall not fornicate with your spouse AND another” it does say that you shouldn’t act in a way that would bring shame to the Lannister’s military. The MCM or Manual for Courts Martial (not #ManCrushMonday) expands on Article 134 to directly address adultery (Article 134, paragraph 62).

So yes, even if you have a notarized contract signed by your significant other, you can still get busted down for bending the knee. Because doing the diddly with anyone who isn’t your spouse can get you into deep snow in the military.

But the threat of a bust down isn’t as much of a deterrent as one would think, as evidenced by the number of those active duty adulterers. While high ranking officials, like Maj. General David Haight make headlines, those more likely to be affected by their neighborly boot knocking are the lower enlisted personnel.

As I have absolutely no data to back this thing up, mostly because of the proclivity to be tightlipped in the military swinger community, I’m going theoretical: Maybe part of the reason Maj. General Haight carried on his affair and swinging lifestyle for so many years because he believed in the inviolability of the  G.I. Oh-Ooh community. Not only did he not expect to be ratted out for his part in a pants-off-dance-off but perhaps he thought that because of the elements needed to procure an actual charge of adultery, he’d be safe word.

According to the MCM, there are three elements that generally need to be met for the charge of adultery to stick. There (one) needs to be either hard physical evidence or a confession that sexual intercourse occurred between (two) individuals while the service member was married (legally separated is iffy here, some consider the hanky-panky a big no-no until holding-the-papers-in-hand-legally-divorced) and (three) that whatever and with whomever you did it, you did it in such a manner that you discredited the uniform.

Maj. Gen. David Haight was eventually busted down to Lt. Colonel. Sure his willy wonderings cost him nearly $43,000 in retirement pay a year, but with the remaining hundred grand yearly, he should, by all means, be able to sustain himself.

For someone younger, and say, lower enlisted, a reduction of pay and a less than honorable discharge would have more than a calamitous result, much like that first Valtrex prescription conversation.

And while none of the individuals that I’ve spoken to over the years and who have confided their lifestyle to me have ever asked for my opinion on the matter, nor have I ever offered it, nor should any opinion I possess have any bearing whatsoever on the way you run your personal life (you do you, boo); I want you to ask yourself one question:

“Is this why I’m not getting promoted?”

All joking aside, whether it’s a spouse swap with the Sgt. from supply, or a dip in the strange pool, your kinks are your own. But what may be acceptable to you, may not be acceptable to your co-workers, your  command or to the branch you belong to.  Although there are some things that can be washed out of the sheets, a less than honorable discharge usually isn’t one of them. A rule of thumb, or any other little finger, should simply be that intimate knowledge provides infinite ammo. Protect yourself, and your career.