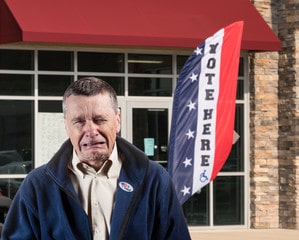 Editor’s Note: This first appeared in The Havok Journal on November 1, 2019. A lot has happened between then and now. We’ll see if I was right or not in a few days…

Like most of America, I predicted that Hillary Clinton was going to win the 2016 US Presidential Election. In fact, I wrote about it right here on The Havok Journal. There was no way I was ever going to vote for Clinton, but I could not bring myself to vote for Trump. I felt like he was a deeply flawed candidate, and that he would be a terrible president.

As it turns out I was wrong about Clinton, and about Trump.

Well, I was partially wrong. Trump was, and is, deeply flawed. But he is doing OK as president. Our economy is booming, unemployment is extraordinarily low, our military is strong, we’re making inroads into cleaning up corruption inside our government and in securing our borders and our children’s futures.

I didn’t vote for Candidate Trump in the last election, but I am absolutely voting for him this time around, and it’s not just for the reasons listed above. It’s all about the alternatives… or for me, the lack thereof. For all of my adult life, I considered myself a centrist. But now, the Left’s rhetoric has pushed me firmly to the Right.

I have come to understand that the Democrat Party offers nothing real, or at least nothing realistic. They are all trying to “out-woke” each other, with offers of using other peoples’ money to give their supporters things that they haven’t earned and don’t deserve. They are clear now that they want to take away our guns. Yes, all of them. Their “Green New Deal” is spectacularly infeasible and economically ruinous. Democrats want to open borders and close down law enforcement agencies. At the end of the day, today’s Democrats offer nothing but hate: hatred of the rich, of Conservatives, of whites, of Israel… you name it. But of course the thing they hate the most is President Trump, and anyone who might even remotely support him. Even if they are children.

In short, the Democrats of today offer nothing to independent voters, or to people on the Right side of the political spectrum who might be tempted to stray Left.

…and people on both Left and Right are starting to notice.

The Democrats’ actions are activating dormant Centrists and voters on the Right, and diminishing their own party’s strengths. It began with #WalkAway, the movement to encourage Democrats to walk away from their part. Then came “Blexit,” with black voters (who voted over 90% for President Obama) gradually peeling away. The latest erosion of a stalwart Democrat voting block, Jewish voters, is under threat by “Jexodus”

President Trump is not a shoo-in for 2020. There is still a lot that can happen in a year. The President could get impeached… the economy could take a nosedive… we could get involved in a disastrous overseas war…

…or, the Democrats might actually come up with a candidate, and a platform, that will appeal to people outside the far-Left wing of their party. But that seems less and less likely as time goes on. More liberals might turn out in 2020, but they’re not going to turn out in places that Trump won last election in enough numbers to win the Electoral College. And as we all know, the popular vote is not what gets someone elected president in our country. Democrats could still win in 2020, and I could be just as wrong about that election as I was in 2016, but at this point, it’s Trump’s election to lose, because the Democrats have already lost.