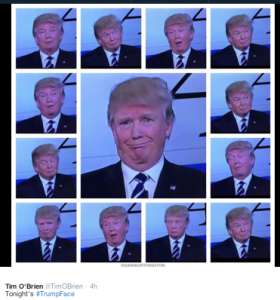 Some times ya just gotta laugh. Would you love to watch?

How long into the air time did it take to mention or notice?

Who gained the most Twitter followers during the first hour of the debate?

Jake Tapper to Carly: “What do you think about Mr. Trump’s persona?” Carly responding to Jake’s question regarding Donald Trump’s comment in Rolling Stone: “Look at that face! Would anyone vote for that? Can you imagine that, the face of our next president. I mean, she’s a woman, and I’m not s’posedta say bad things, but really, folks, come on. Are we serious?”