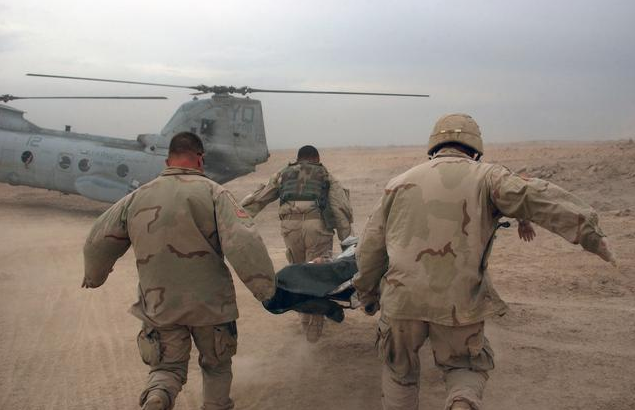 On 24 JAN 2022, the U.S. Department of Defense (DoD) released a casualty status report accounting for all Service Members that lost their lives since 07 OCT 2001, following the U.S.-led invasion of Afghanistan in the aftermath of the 9/11 attacks on the World Trade Center. According to this report, 7,074 Service Members have been killed fighting in the multitude of campaigns that constitute the Global War on Terrorism (GWOT), and an additional 53,323 Service Members have been wounded. In total, America’s sons and daughters have sustained more than 60,000 casualties in 20+ years of sustained combat operations abroad. Sadly, for many of America’s Service Members and Veterans, wars don’t end when they return home, the battlefield becomes psychological, and family members become emotional casualties of war.

The suicide rate among U.S. Service Members and Veterans is staggering. It dwarfs the number of those killed during the GWOT and drastically outpaces the suicide rate of the general population by approximately 2.5%. A study conducted by Brown University’s Cost of War Project concluded that well over 30,000 Service Members and Veterans have taken their own lives since the onset of post 9/11 military operations. Year after year these numbers continue to climb, and there are ongoing allegations that the DoD and Veteran Affairs (VA) drastically under-report these numbers.

The fact that America’s Service Member and Veteran Communities represent less than 10% of the adult population, and that such a tiny minority has carried the burden of prolonged conflict, further compound these statistics. The constant exposure to war-time trauma and high-stress situations, historical lack of emphasis on mental health within military communities, fear of ostracism when seeking professional help, and a disengaged public have created an environment wherein post-traumatic stress is prevalent and military community members feel alienated from the rest of the American population.

For The Ultimate Sacrifice Foundation (TUSF), this is unsatisfactory. We have made it the primary tenet of our mission to help our Military Communities take ownership of this problem-set, find a renewed sense of purpose and self-worth, and win the wars within.

Currently, TUSF is piloting an initiative called the Warrior Ride; an awareness campaign regarding the elevated rates of military-related suicides and post-traumatic stress wherein Combat Veteran Kyle Bigue is conducting a 3,700 mile, coast-to-coast bicycle ride from Boston, MA to Coronado, CA in 50 days. Additionally, this will be a healing journey for Kyle, as he continues to contend with his own mental health issues.

In early 2013, Kyle and many of the TUSF Staff deployed together to Ghazni Province, Afghanistan with 1-87th Infantry Battalion, 10th Mountain Division in support of Operation Enduring Freedom (OEF). During that deployment, Kyle and multiple TUSF Staff Members were directly involved in a situation where SGT Anthony Maddox, one of our many brothers that gave their lives in service to their country, was killed.

Kyle and two other Soldiers, SGT Caleb Walters and SGT Roy Arcentales, fought like lions to try and save SGT Maddox. Through red-hot flames and choking smoke, with complete disregard for their own safety, they fought. They literally walked through hell to get SGT Maddox out, and they succeeded. Sadly, SGT Maddox succumbed to his substantial wounds a few days later, but the courage and love demonstrated in those moments served as the catalyst for the formation of TUSF, and we will never forget it.

The burden of that day will always weigh heavy on those that were there. However, that was one day among many. One story among thousands. The purpose of Kyle’s ride is to honor all the stories of those that fought like lions on foreign battlefields. All the blood spilled in faraway lands. All the brothers and sisters lost. But most importantly, the TUSF Warrior Ride will highlight the internal battles that many of us continue to wage at home, empower us to confront these invisible enemies head-on, and win.

Since March 2022, TUSF has been personally impacted by two additional suicides from within the Veteran Community. Two more brothers we fought and bled with managed to survive the combat but succumbed to their emotional and spiritual wounds. Two more families have lost brothers, fathers, and sons. Two more too many, and sadly, there is no end in sight.

While Kyle conducts the 3,700-mile TUSF Warrior Ride to raise awareness and bring these issues to the forefront of the general public’s collective mind, TUSF hopes that awareness will turn into funding. This funding will be used to host community-building gatherings, events, and retreats for America’s warriors, young and old. Additionally, TUSF is partnering with SOBA, one of the Nation’s premier behavioral health and addiction treatment providers, to get those struggling with post-traumatic stress, suicidal ideations, and substance abuse the much-needed help they deserve free of charge. If we save just one life, our lives will be well-lived.

If you would like to support the TUSF Warrior Ride and help TUSF accomplish our mission, please text “WARRIOR” to 801801. Or, to find out more about TUSF and to follow our journey, visit www.t-usf.org or follow us on social media (IG: @ultimate_sacrifice_foundation / FB: Ultimate Sacrifice Foundation).