HomeNationContemporary AffairsJade Helm: Elected Officials Should Represent Their Constituents, Not Their Conspiracies 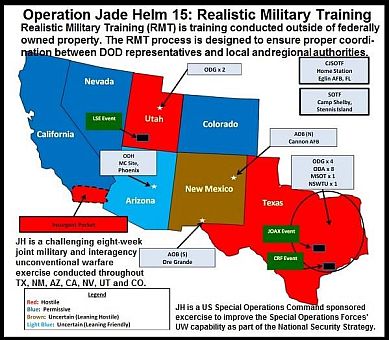 A complex military exercise taking place inside the United States, innocuously named “Jade Helm 15”, has roused fears of a military takeover on the internet.  The controversy began around March when internet antihero Alex Jones obtained a series of PowerPoint slides from the exercise’s operations brief.  Jones, best know for his fringe conspiracy site InfoWars.com, is considered by many to be the foremost proponent of conspiracy theories in the United States.  Conspiracy is big business these days; according to internet analytic service Alexa, InfoWars receives just over one million unique page views every day.

The unclassified Jade Helm slides, which portrayed several Southwestern US states as either ‘blue’ for friendly, or ‘red’ for enemy, drew instant alarm among Jones’ readers.  It shouldn’t have.  For large military exercises, it is common practice to mark areas as notional “friendly” and “enemy” territories, much as one would do in a real conflict. However Jones’ readership, some of whom are veterans themselves, instead saw Jade Helm as a covert plan by the Obama Administration to attack these “enemy” states.  Since then, Jade Helm has been linked to every conspiracy narrative under the sun, from gun confiscation plots to chemtrails.

Texas Governor Greg Abbott, whose state was marked as a notional “enemy” in the slides, issued a press release stating that he planned to employ the Texas State Guard to monitor the exercise.  The Guard, he said, would ensure that the Constitutional rights of Texans are not infringed.  The move was part assurance, part political pandering; conspiracies regarding the Obama administration gain easy traction in some parts of the rural South.  But in doing so, Gov. Abbott may have legitimized their paranoid concerns, and subsequently added more fuel to the fire.

Once dismissed by psychologists as simple mental illness, conspiracy theories are now considered a natural part of the human condition.  They’re a survival mechanism, psychologists say, and the prevalence of conspiratorial beliefs has since led to an entire field of study dedicated to the phenomenon.  What researchers have found since serious work began in the mid-90’s is that conspiracy belief correlates highly with a generalized lack of trust, both in society and government.

Westminster Psychology Professor Viren Swami further posits that belief in conspiracies can give a sense of agency to those of us with a highly cynical world view.  “If you know the truth and others don’t, that’s one way you can reassert feelings of having agency,” he says. Researchers have also found that conspiracies rarely come in single-serving portions.  For example, in a study conducted in 2009 among British adults, respondents were asked who they believed was responsible for the assassination of John F. Kennedy.  A mere twenty percent replied that Oswald acted alone, while fifty-one percent of respondents professed belief in a wider conspiracy.  When questioned about other popular theories, the fifty-one percent conspiracy group reported belief in two or more conspiracies (including theories related to September 11th, among others) at three times the rate of other groups.

Psychologists have labeled this mode of thinking “fundamental attribution error.”  It’s a kind of cognitive bias that can cause people to place an undue emphasis on certain internal characteristics to explain behavior in a given situation, while ignoring external factors.  It’s what allows Texans to hold the paradoxical belief that the United States military is full of heroes and patriots, yet these same patriots will also willingly follow Barack Obama’s orders to institute martial law.

The belief – that Barack Obama is a socialist tyrant hell-bent on destroying America – overrides the competing notion that America’s servicemen and women are rational people who, in all likelihood, would not follow orders that could be considered illegal or unjust.  But this attitude can manifest itself in bizarre fashion: during a town hall meeting in Bastrop County, Army spokesman LtCol. Mark Lastoria had the unenviable task of explaining that he not only wasn’t a shill for the Illuminati, but also had no plans to smuggle ISIS terrorists into Texas.  Shortly after, he was thanked for his service.  Talk about cognitive dissonance.

Did Gov. Abbott make the right decision by addressing the fears of his constituents?  In short – no.  The preponderance of research has shown that belief in conspiracies is notably illogical, and stubbornly resistant to outside rationalization.  By acknowledging the conspiracy, Gov. Abbott has given legitimacy to this disturbing worldview, and future anti-government movements will invariably point to this event as they did to Waco, 20 years ago.  It was all the evidence that Timothy McVeigh needed.

In a state like Texas with an established secessionist culture, this can have dangerous implications for the future of federalism.   When any government action can be considered a “false flag operation” or “precursor to martial law”, elected officials must be cognizant of the messages that they project. If not, they can unknowingly invite disaster, and the safety of the union will not be under threat by some unseen Jade Helm reptilian overlord, but from its own citizenry.  America needs leadership, not fear-mongering.