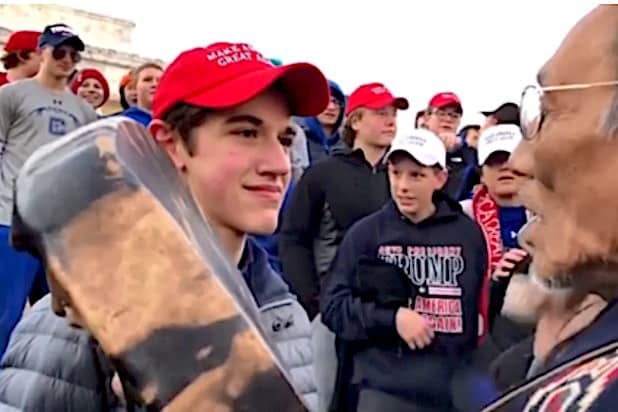 “Deeds, Not Words:”  It’s Too Late To Apologize For What You Did To The Covington Kids
by Scott Faith

If you’re like most Americans, you have by now seen the video of a gang of white racist Kentucky-bred MAGA-hat-wearing extremists accosting a peaceful Native American war veteran in the middle of the Indigenous Peoples’ March.  …or at least that’s what some people want you to see.  If you are unfamiliar with this controversy, here you go, courtesy of The Huffington Post, who ran with the headline “Native American Vietnam Veteran Speaks Out After MAGA Hat-Wearing Teens Harass Him”

If you’re like most of the mainstream press and left-leaning celebrities, you were falling all over yourselves with righteous indignation.  This, in turn, made you more than eager to signal your virtue to the world by making tweets, posts, and articles about how the Bad Orange Man’s “Trumpkin” minions, smirking away in their secure white privilege, deserve anything from expulsion to death for what they did to the innocent victim.

This, from CNN, was typical of the immediate media coverage: 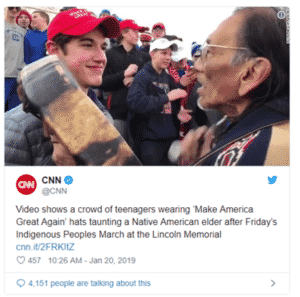 Perpetual race baiter Shaun King, best known as a leader in Black Lives Matter, had this all over his social media pages:

A writer for the far-left mouthpiece Jezebel named Anna Merlan (do you remember her from her smug, condescending defense of Rolling Stone’s big fake rape hoax?) wanted to “put these fucking kids in a shark tank” and asked for her followers to acquire a copy of the Covington yearbook for her.  Classy. 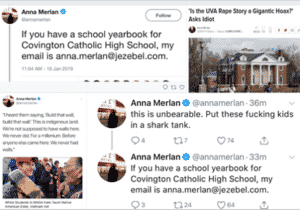 Well, I guess getting fed to sharks is marginally better than wanting to murder the Covington children by inserting them headfirst into a woodchipper, as Hollywood producer Jack Morrisey suggested.

…and of course the New York Times was there, gleefully leading the way with a story about the “predominantly white,” “cheering and jeering,” MAGA-hat-wearing ruffians.

Kentucky’s secretary of state as well as the mayor of Covington were both quick to condemn:

Even members of Congress got into the act, with Representative Deb Haaland (D-NM) claiming that the youths committed an act of “blatant hate, disrespect, and intolerance.”

Wow.  With all of those members of the media, dignitaries from their home state and home town, and members of Congress going after these boys there must be iron-clad evidence of their malfeasance, right?  Something more than a clearly-edited video produced by a know far-left agitator? Something more than Orwellian “face crimes?”

When I first saw the video, I admit I thought it looked bad.  Like, really bad.  It also seemed like a liberal’s dream: white people.  MAGA hats.  Minority, war veteran “victim.”  Steps of Lincoln Memorial.  Indigenous Peoples’ March.  Martin Luther King weekend.  An indigenous “elder” protecting innocent African Americans from a white mob.  It was almost like it was manufactured for the occasion.  What a gift to the far left!  It’s almost too good to be true!

…and that’s why I held off on commenting on the situation, either here in The Havok Journal or on my various personal outlets.  It seemed like there was more to the story.  It was, as I said, simply too good to be true.

And, of course, there WAS more to the story.  Check out a lengthier video:

Wow, taking the time to look into this situation really helps paint a better picture.  This wasn’t a “gang of white racist Kentucky-bred MAGA-hat-wearing extremists” at all.  In reality these students were minding their own business in a public space, awaiting transportation home, when they were accosted by a group of Black Hebrew Israelites (ever heard of these guys?  They’re… interesting, I guess, in a Westboro Baptist Church kind of way).  Then, the students attracted the attention of Native American “Vietnam War veteran” and professional provocateur Nathan Phillips, who approached the group chanting and banging his drum.  He then singled out one of the students, chanting and loudly beating his drum inches away from the child’s face, clearly trying to intimidate, harass, and provoke.  While some of his classmates responded to the Black Hebrew Israelites and the man who injected themselves into their group in the way high schoolers are wont to do, the young student at the center of the controversy did nothing more than smile nervously and hold his ground.

That wasn’t all for Mr. Phillips though, who enjoyed the media spotlight with the now-predictable rounds on CNN, and may soon enjoy the windfall of now-predictable GoFundMe campaigns started in his name.

You provided an interesting take on the situation, Mr. Phillips.  But what you and your supporters, (which include CNN) are saying, simply isn’t borne out by the video evidence.  And what was it you did in the Vietnam War again?

At any rate, it’s clear (from the evidence that WASN’T selectively tailored) that the real “racists” here were the Black Hebrew Israelites.  They ranted, cursed, engaged in foul racial and homophobic slurs, and taunted passersby and bystanders for what… an hour plus?  Yeah, no media reaction.  No “all up in your face with the drumming and chanting.”  Weird.  But then a bunch of white kids in red hats show up and it’s “But… but… MUH RACISM!!!” time.  It’s clear that Mr. Phillips was the aggressor and approached the Covington students, not the other way around.  And it’s clear that the real victims here are those children.

This was nothing more than the latest in a series of bullshit crybully hate hoaxes.  And you all fell for it.

I guess we’re just going to have to call that an inconvenient truth.

The worst racists here aren’t the Black Hebrew Israelites.  Don’t get me wrong; as I said earlier they are in fact racist.  And sexist.  And homophobic and anti-Semitic.  But that’s who they are and what they do.  They don’t try to hide or sugar-coat it.  No, the worst racists are everyone who watched a clearly-incomplete video, immediately accepted the proffered media narrative, and offered the worst condemnations possible based on a lie, simply because the alleged perpetrators were male, conservative, and white, and the alleged victim wasn’t.

This was clearly, undeniably, and unambiguously a hate hoax.  Mr. Phillips approached the Covington boys.  Mr. Phillips instigated the incident.  Mr. Phillips’ crew engaged in racial taunts.  And Mr. Phillips grossly misrepresented the encounter to anyone and everyone who would listen.  And as it turns out, according to his official military record Mr. Phillips isn’t a “Vietnam War veteran” after all.  In fact, it now appears likely that he’s not even 1/1024th “Vietnam Veteran.”  So it looks like the media, and numerous other people, got this incident nearly 100% wrong.  But none of that stopped the attack dogs on the left from savaging anyone and anything associated with this event.  They even doxxed, harassed, threatened and tried to ruin a Covington student—a minor—who wasn’t even there.

This isn’t the first time a hate hoax has gone viral, of course.  It’s just the latest one.  And as in the many, many other times this has happened, like at the Air Force Academy, K-State, and Eastern Michigan, and with the “racist receipt,” and “racism at the traffic stop.”  And those are just more-recent examples.  Of course these pale in comparison to the despicable handling of the Duke Lacrosse case and the Tawana Brawley situation.   What do all of these things have in common?  They were hate hoaxes that everyone seemed to buy hook, line, and sinker.  Just like the situation here.

And just like those cases, the people who jumped on the anti-Covington bandwagon are falling all over themselves to apologize for it.  Many of the people who got in on the story early never even watched the original video, much less the un-edited-to-support-a-far-left-narrative one.  They simply reacted to the headline and the photo, just like the people who made this story up, and those who helped them spread it, wanted them to do.

Now, of course, there are a lot of people backpedaling.  Here’s one example:

And you are not the only one.

While there is plenty of blame to go around in this situation, the absolute worst part of this whole thing is the reaction from the school.  Covington Catholic High School, you are cowards.  Let me be more clear:  you are complete and utter moral cowards.  Your hatred of President Trump and your fear of far-left violence and intimidation caused you to desert your most precious asset, your students, right when they needed it the most.  How could you possibly throw your students to the wolves like this, right on your main page for the world to see?

<<<There is more to this story on the next page>>>