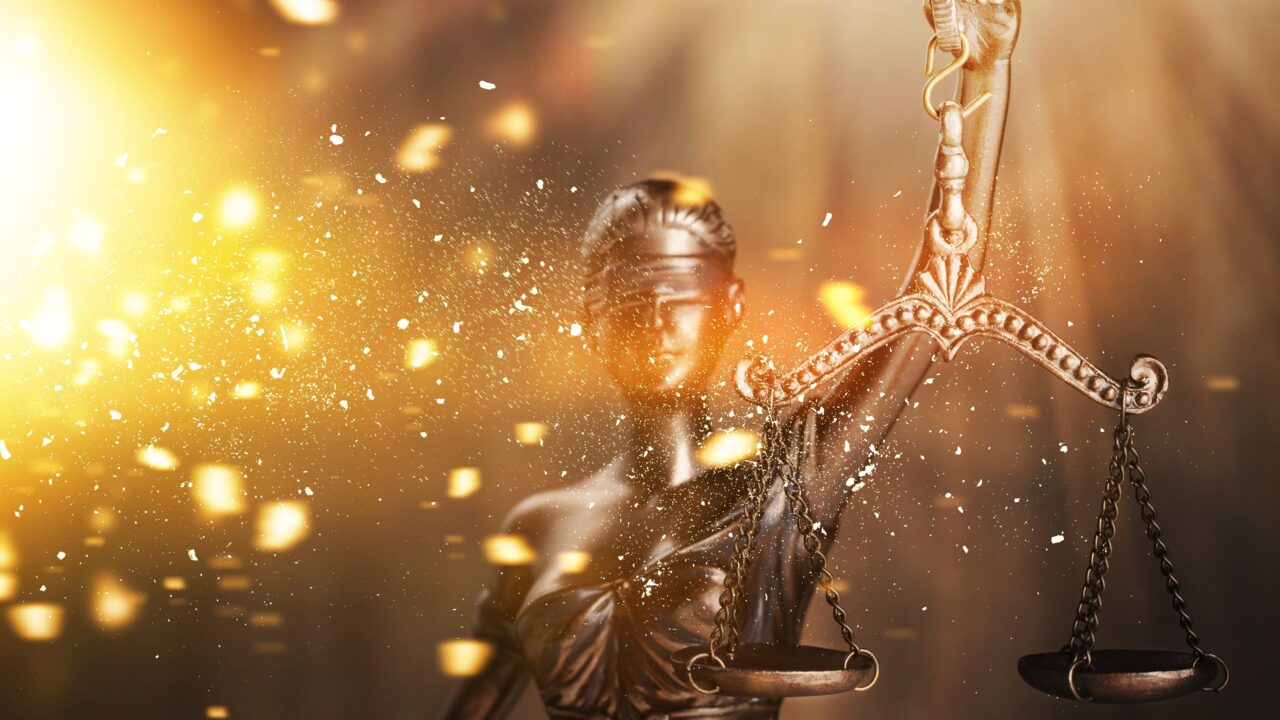 With the not guilty verdict in the Kyle Rittenhouse trial just read [November 19, 2021], our country should seriously address the topic of due process and the influence on criminal prosecutions by public opinion, social media, and news mediums. From Rodney King and O.J. Simpson to Derek Chauvin and Kyle Rittenhouse, media coverage, popular belief, and public perception have had a monumental and often negative impact on the U.S. justice system, specifically the right of suspects and defendants’ right to due process and presumption of innocence.

All too frequently, emotion and not the facts of the case dictate prosecutions and subsequent verdicts, and it becomes a self-perpetuating and exponentially more destructive force. In addition, social media and news sources have strayed from long-held standards of referring to those accused of crimes as suspects or alleged criminals to maintain the presumption of innocence, not taint potential jury pools, and mitigate the risk of civil libel lawsuits. This article seeks to address some of the influences and challenges this country faces and how future high-profile trials should address these issues in the age of social media and arguably biased news coverage.

Charges had not even been filed yet against Kyle Rittenhouse, and media pundits and political figures were already disparaging his character and labeling him a violent criminal. Facebook and other social media platforms, along with crowd-funding sites, quickly began censoring and removing content supporting Rittenhouse stating it violated their community standards regarding the promotion of “mass murderers.” “Fact-checkers” such as Politifact Wisconsin incorrectly asserted he had violated ambiguously vague Wisconsin firearm laws or suppressed factual details from the incident.

There were even several instances where individuals lost their jobs for showing support for Rittenhouse on social media or donating to his defense fund. Even after he was indicted and turned himself over to authorities, the investigation was still ongoing, and all the facts were yet to be determined. Unfortunately, the media and other public personalities had already deemed him a murderer, necessitating immediate and lengthy incarceration. Some even called for him not to receive the benefit of a trial and much worse.

Throughout the pre-trial proceedings, there were several occasions where Rittenhouse found himself in the public spotlight for subjects unrelated to the court case and was further slandered and denigrated by public figures and the media, including the now-sitting president. For example, photographs became in the public domain of Rittenhouse in a bar with members of the alt-right group the Proud Boys (often themselves misportrayed as white nationalists/supremacists despite having numerous minority members). Similarly, photos were released of him wearing a t-shirt from a veteran-owned coffee company, Black Rifle Coffee, earning him further condemnation and vilification. None of these were relevant to the case and arguably ambiguous to define his character. Still, they only served to fuel the negative portrayal of Rittenhouse by the media, public figures, and casual information consumers.

Rittenhouse soon disappeared from the public spotlight, likely at the urging of his attorneys, and a myriad of other public outrages overshadowed his case. However, this all changed once the trial began. Once again, people were frothing at the mouth to convict him with little regard for due process and his right to a fair trial. Before the prosecution even finished presenting its case to the jury, it became almost absurdly clear to anyone who had viewed the publicly available footage from that night and a peripheral understanding of the case that Rittenhouse had a solid affirmative defense of self-defense. His detractors were unphased by the evidence and testimony presented supporting his defense, and his acquittal has already sparked irrational and emotional outcries of injustice and condemnation by many well-known ideologues.

One should note that the incident that sparked the riots in Kenosha, WI, the night in question, the police shooting of armed and wanted felon Jacob Blake, was itself the victim of trial by media and self-proclaimed police procedure experts also. Since 2016 and even earlier, countless officer-involved shootings (OIS) rarely receive a rational or objective response from modern media sources and almost immediately fuels civil unrest. The death of George Floyd in May of 2020 while being detained by Minneapolis Police Department officers sparked months of intense protests nationwide, most of which rapidly digressed into violent and destructive riots.

Again, narratives and ideological perspectives pushed by media outlets and similarly-aligned public personalities only cultivated and propagated more violence and disorder, exponentially compounded by other OIS in the following months. A semi-informed public equally stirs up unrest and is driven by preconceived notions and access to an internet search engine. These “internet esquires” [admittedly this author included] with little to no legal schooling or experience cite statutes from Cornell Law [albeit an excellent information source] they find after a thirty-second Google search. Still, they do not thoroughly read or understand all the other relevant case laws surrounding the statutes or subsequent rulings. People equally subject police and military procedures to this type of internet-expert pontification and bloviation.

This self-afflicted ignorance or self-assuredness leads to further misconceptions, misperceptions, and misgivings over how prosecutions and judgments are determined. The Rittenhouse trial was rife with these over many of Judge Bruce Schroeder’s rulings, especially those admonishing various prosecutorial indiscretions and infringements.

Over the last thirty years, there are other examples that the media has similarly cultivated public perceptions of a case’s verdict, often leading to widespread civil unrest. For example, the shooting of Trayvon Martin by George Zimmerman in 2012, the Ferguson PD OIS of Michael Brown in 2014, and even the debunked Trump-Russian Collusion narrative point to the unfortunate and destructive societal and cultural trend of the media is reporting first and [sometimes] issuing a retraction/correction second. One of the main consequences is how this kind of reckless reporting and propagation of misinformation/disinformation influences potential and serving juries and the ability of a defendant to receive a fair trial from an impartial jury.

Trial by media and mob justice has another, far more concerning and insidious consequence, and that is on jurists. The tainting and passive intimidation of jurists by the press and public outrage will undoubtedly have long-lasting impacts. A clear example of this was a report of an MSNBC producer whom local police discovered tailing the Rittenhouse trial jurors’ transportation bus at the behest of his supervisor. A similar incident occurred, but by a private citizen, and a cousin of George Floyd called for the jurors’ “doxing” (public disclosure and dissemination of identity and personally-identifying information). There was also an unverified report that at least two of the jurors had spoken to the U.S. Marshalls over concerns for their safety and the impact it would have in rendering a verdict. In all of these situations, the standard for jury tampering or intimidation did not satisfy the criteria to warrant prosecution.

Still, this disturbing trend could have easily influenced the jury’s deliberations and the trial’s outcome. Comparably, in both the 1995 O.J. Simpson and 2021 Derek Chauvin murder trials, jurors stated they were concerned about civil unrest, riots, and even personal retribution following an unpopular verdict. There is little doubt these are a form of intimidation and will impact people’s willingness to do their civic duty serving on the jury of high-profile cases or any trial.

Jurors are not alone in facing this ever-increasing onslaught of character assassination and threats of violence. Defendants, witnesses, attorneys on both sides, and even judges have suffered verbal, printed, and physical attacks by incensed ideological opponents. For example, as stated earlier, celebrities and politicians continue to characterize directly or infer that Kyle Rittenhouse is a white supremacist. In addition, Judge Schroeder and his family have endured a deluge of hate mail and threats for making rulings unfavorable to the prosecution during this case, a “patriotic” ringtone on his cellphone, and an off-color quip about Asian food and supply chain issues. Similarly, Antifa members using a pig’s head and blood vandalized the former home of a defense witness in the Derek Chauvin trial in an apparent attempt to terrorize him and his family.

Nick Sandmann, a high school kid on a school trip to Washington, D.C., was likewise publically berated and maliciously mischaracterized by the media and famous personalities resulting from an incident at a pro-life rally. Thankfully, Sandmann was able to bring civil suits against some of the prominent figures and received at least one hefty settlement for defamation. One can only hope Kyle Rittenhouse can receive equal compensation after his life irrevocably changed when the Kenosha District Attorney brought charges against him and the media and the public perpetually besmirched him.

Unfortunately, this saga is far from over, as is the ongoing and exponentially increasing assault on due process, the presumption of innocence, and the rule of law in the U.S.’s current criminal justice system. Already the House Judiciary Committee chairman Jerry Nadler (D-NY) has demanded the Department of Justice investigate the trial and possibly seek federal charges against Kyle Rittenhouse. Likewise, the head of the Democratic Congressional Campaign branch Cory Bush (D-MO), continued to make false assertions about the original Jacob Blake shooting, stoking racial and ideological divisions. Undoubtedly, the verdict will result in more widespread rioting and civil disturbances and intensified calls for more stringent gun control measures; a subsequent article will address the latter in more detail.

In closing, thankfully, the not guilty verdict in the Kyle Rittenhouse trial does provide a glimmer of hope that the U.S. legal system is not entirely broken and has not wholly fallen victim to the court of public opinion and mob justice. To their credit, many media outlets have started to walk back some of their more inflammatory narratives regarding Rittenhouse and the trial. However, many of these outlets are now focusing on the firearm used in this incident; a CNN contributor used the term “gun” roughly a dozen times when providing commentary on the verdict. As stated above, pundits will likely use this to push for stricter gun control later.

This topic will be the discussion of another supplemental article. Still, the digital age has not made combating trials by media, internet esquires, and mob justice any easier. Instant access to news and information and vastly improved video/media technology is similarly a double-edged sword. These mediums provide people both the necessary transparency and audio-visual material to make informed assessments but still require adequate context and literacy of the information they are receiving. As a result, the U.S. needs to immediately address the underlying issues that have cultivated and fostered these dangerous trends devolving societal and cultural norms regarding criminal justice and the rule of law in the country.