Like most Americans, I’ve stood in perplexed wonder as my neighbors cleaned out the shelves of our local grocery stores, buying as much as they could of whatever it was they thought they were going to need to deal with COVID-19. I’ve seen this before: I live on an island, and it seems that anytime there’s a strong wind, people are out in force panic-buying supplies like water and rice. But even during the height of hurricane season, with a massive storm heading towards us, I’ve never seen anything like I’ve seen during the COVID-19 panic-buying.

The biggest head-scratcher is, of course, toilet paper. I don’t know how much pooping people thought that they were going to be doing during the reaction to COVID-19, but given that diarrhea isn’t even a common symptom of COVID, it seems like a completely irrational purchase. Also, coronavirus can’t survive in chlorinated water, and it certainly can’t shut down the water supply, so I don’t get why people felt the need to buy bottled water by the pallet. And how many 50-pound bags of rice do you think your family of four needs, Karen? At this rate, you can feed all your kids through college.

The great irony of this whole thing is that if people just bought what they needed when they needed it, like they normally did, there would be no great shortage. There would still be plenty of rice, canned beans, Clorox wipes, Charmin… whatever. It.Would.Still.Be.There. But because people decided that they wanted to wanted to be greedy, they cleaned out the shelves… which in turned caused other to panic and clean out the shelves… and so on and so on. 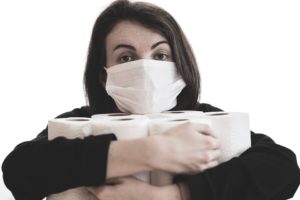 Buying what you think you need, I kind of get. But some opportunists smelled a money-making opportunity amidst the panic. One infamous individual who bought up all of the cleaning and sanitation supplies in his rural Kentucky/Tennessee area was called to account by authorities after he was profiled in a New York Times piece. After getting called out for the crime of price gouging, he managed to give away some of his supplies before the rest was confiscated by the state.

That should be the norm: if you deprive your fellow citizens of the things they need in order to enrich yourself during a global crisis, there should be consequences.

Another individual who likely had the same kind of scheme in mind recently tried to return over FIVE THOUSAND rolls of toilet paper and 150 LITERS of hand sanitizer after he was blocked from selling the supplies online.

The nerve: first, he buys up all of the stuff people are desperately seeking during the COVID-19 crisis, and then tries to sell it out to them at hugely inflated prices. Then, when online retailers and local authorities get wind of it, HE TRIES TO TAKE IT BACK FOR A REFUND.

All of the above leads me to make this earnest plea:  retailers, please—PLEASE—do not let customers return consumables that they hoarded during the COVID crisis. I’m talking canned food… toilet paper… water… hand sanitizer… protective masks… anything like that. Anything that people selfishly hoarded at the expense of others. Don’t take it back, don’t give people their money back. Don’t encourage this kind of bad behavior in crises to come. Because at the end of the day, it negatively impacted your other customers and it negatively affected your employees, who had to deal with people upset that the things they legitimately needed were sold out. And if that’s not enough, it will affect your bottom line because now you have all of this crap back, which will take your employees’ time and cost you money in refunds; it will increase storage costs; and the glut of these now-unneeded-supplies will ensure that much of it will go unsold now that things are going back to normal.

So make the greedy bastards who sought to price gouge by buying up all the supplies in their area, eat the cost of their unsold inventory. Make the idiots who bought more toilet paper absorb the cost of their folly. Make the people who cleaned out the rice, tuna pouches, and canned food learn a lesson by keeping it on their shelves.

I’m not talking just the “big fish” either. Everyone who bought more than they needed, deprived someone else in need. So, follow the lead of retailers like Amazon and Target—and the entire state of New Jersey—who are doing something about it.

Of course, it would have been better if everyone would have enacted purchase quantity limits in the first place, but better late than never, I suppose…