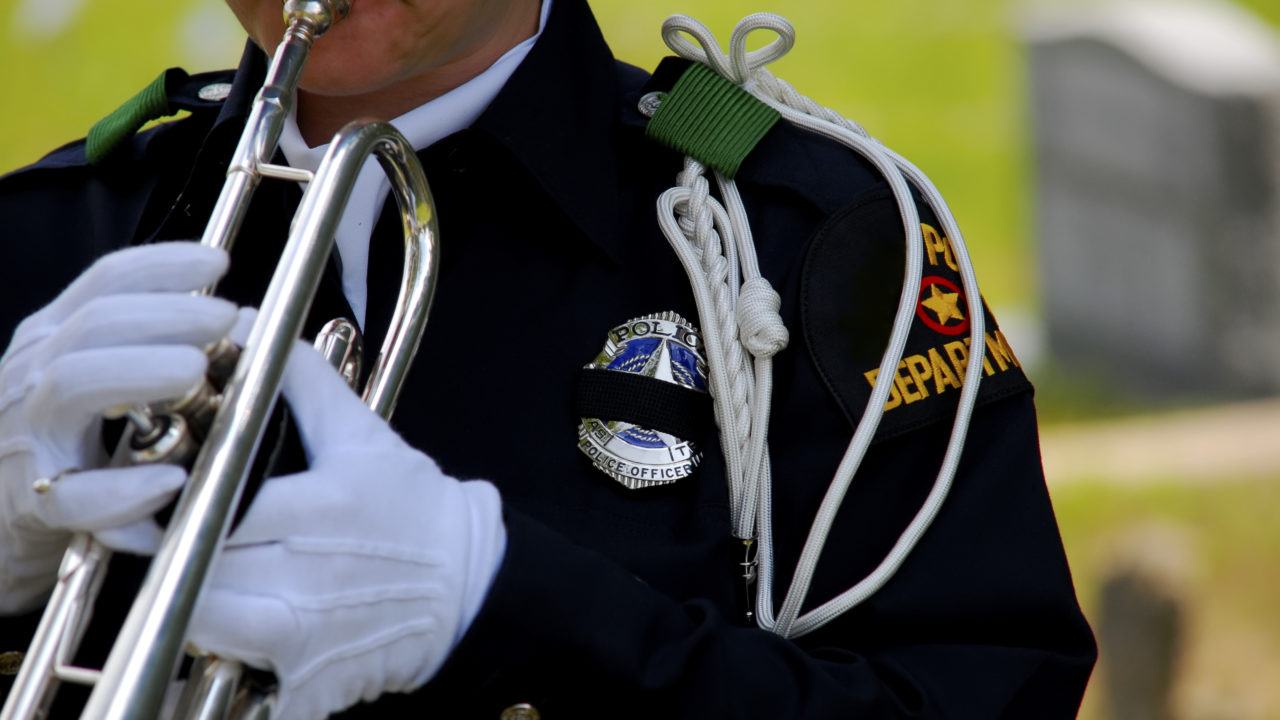 President John F. Kennedy gave the law enforcement community a Memorial Day. May 14. A day where we get to reflect on our brothers and sisters who died in the line of duty. Read President Kennedy’s proclamation below:

By the President of the United States of America

Whereas our law enforcement agencies play an essential role in safeguarding the rights and freedoms which have been guaranteed by the Constitution to every American citizen; and

Whereas it is important that people throughout our country know and understand the problems, duties, and responsibilities of their police departments and that members of our law enforcement agencies recognize their duty to serve the people by safeguarding life and property, by protecting them against violence or disorder, and by protecting the innocent against deception and the weak against oppression or intimidation; and

Whereas the Nation’s police departments have grown to be modern and scientific law enforcement bodies which unceasingly provide a vital public service; and

Whereas the Congress, by a joint resolution approved June 21, 1961 (75 Stat. 94), has designated the week of May 13-19, 1962, as Police Week in recognition of the contribution the police officers of America have made to our civilization through their dedicated and selfless efforts in enforcing our laws and has also designated May 14th as Peace Officers Memorial Day in honor of the Federal, State, and municipal peace officers who have been killed or disabled in the line of duty; and

Whereas that resolution requests the President to issue a proclamation inviting the people of the United States to observe such period with appropriate ceremonies and activities:

Now, Therefore, I, John F. Kennedy, President of the United States of America, do hereby call upon the people of the United States, and upon all patriotic, civic, and educational organizations to observe the week of May 13-19,1962, as Police Week with appropriate ceremonies in which all of our people may join in commemorating police officers, past and present, who by their faithful and loyal devotion to their responsibilities have rendered a dedicated service to their communities and, in so doing, have established for themselves an enviable and enduring reputation for preserving the rights and security of all citizens.

I further call upon the people of the United States to observe Monday, May 14, 1962, as Peace Officers Memorial Day in honor of those peace officers who, through their courageous deeds, have lost their lives or have become disabled in the performance of duty.

In Witness Whereof, I have hereunto set my hand and caused the Seal of the United States of America to be affixed.

DONE at the City of Washington this tenth day of April in the year of our Lord nineteen hundred and sixty-two, and of the Independence of the United States of America, the one hundred and eighty-sixth. 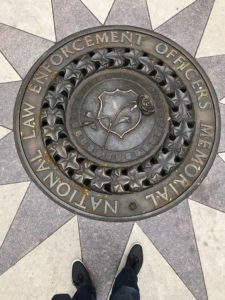 Picture taken at the Law Enforcement Memorial in DC

Now that you’ve read this, I’m going to give a peek into the mind of a cop, when one of our brothers or sisters killed in the line of duty.

I have been to several police funerals. Even one is one too many. The ones that really sting are those who were murdered. Murdered for doing their jobs, murdered because an evil person decided they didn’t want to go to jail or face a judge. That officer was murdered because they went out to make someone accountable for their actions. This is what we do:

We gather in formation, several hundred officers, and even at times thousands. Honor Guard up front, uniformed officers behind them. Various law enforcement agencies gather for a day of mourning one of our murdered brothers or sisters. The murderer was apprehended, handcuffed, and sent away. We officers understand that we are not the jury nor executioners. As much as we want to act out whatever is going on through our minds: We hold back. We honor the laws of the land. That’s what is required of us.

When the murderer is apprehended, they get to go to jail. They aren’t beaten to death, they aren’t executed. The handcuffs are on them, so the fight is over. We officers are quiet, dazed and some have tearful eyes. A large procession of police officers follows the Medical Examiners van because that is where the body of the slain officer is.

The murderer faces a judge the next day, gets their breakfast, and changed into clothes. They are in court, in chains, and facing a judge. They are either assigned a lawyer or have already hired an attorney. Meanwhile, the family of the slain officer cry and scream while we officers provide support and comfort. The murderer is ordered held without bail and sent to the local jailhouse. The murderer is housed there until trial. The murderer gets their prison clothing, food, and whatever else they require. The family of the murdered officer is left with bills, pain, and that empty feeling that their whole world has crashed and burned.

We officers have not stopped working. We are still answering calls. We have to see a grief counselor. Some of us are still shaken but holding it together, while others can’t go back to work yet. Those officer’s shifts are then covered by other officers. We check on each other, we are silent, we go about our day. Area departments are asked to help the affected police department. Every officer in the area departments volunteers to assist. That way we can prepare for the funeral, and every officer of that department can be present. Area departments also cover that department’s jurisdiction. 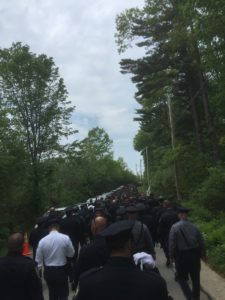 Officer’s making their way to a fellow officer’s funeral

The day of the funeral. The mood is somber, some officers joke around to ease the tension. We stand in formation. Bagpipes are played, prayers are made. The police department’s Honor Guard folds the flag. The flag is then presented to the Chief of Police. The Chief makes their way to the family of the murdered police officer and presents the flag and salutes the family. 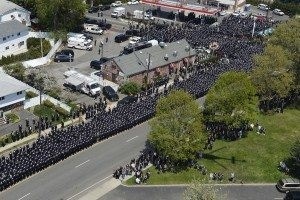 Police week comes around. Thousands of police officers from all over the country go to Washington DC to honor their fallen. The recently murdered names are etched on the memorial wall. 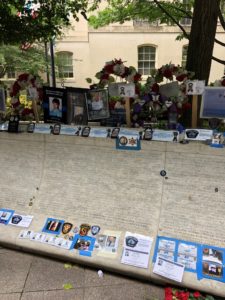 A small part of the Memorial wall 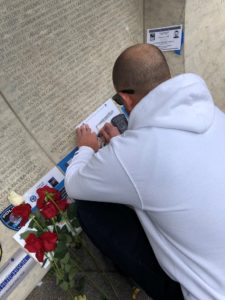 An officer tracing his colleague’s name

Later that evening, we head to the National Mall, to call out the names of the officers that died for that year. Each name is read, one at a time, a bell is rung each time. We all hold candles in the air. 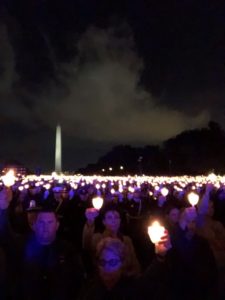 Officers from all over the country

The ceremony ends. The walk is eerily quiet. For thousands of us, our colleagues’ memories linger. Soon after, the laughter begins, sharing of stories, officers announce their retirements from the job. Officers from all over the country are there. They may not know each other, but in the end, they know that they are brothers and sisters. Black, white, Hispanic, Asian, Arab, it doesn’t matter. We all bleed blue.

After a night of ceremonies, laughter, and story sharing, we return to our respective agencies. It’s back to work and business as usual. We are out there capturing some really evil people. We are out there reminding you not to speed. We are out there helping an elderly woman walk across the street. We are holding the hands of a person we know is about to die. We are comforting victims of violence. We are tormented by a court system that sometimes frees bad people too quickly. We get frustrated when our voices aren’t heard.

We are out there enforcing the laws that the people and politicians voted for. We are a reflection of society. We are the best in our society. We are the hunters of evil, and the last line of defense for the communities we swore to protect. When one of us is murdered. We mourn and we celebrate the officer who made the ultimate sacrifice.

Then it’s back to business as usual.

For years, Ayman has seen the trend of a lack of training in policing. Whether it’s budget cuts, political enemies, or ineffective policy, Ayman has made it his mission to bring innovation, and unconventional policing methods, and to have those tough conversations and instructions to assist law enforcement to better relate with and advise communities.