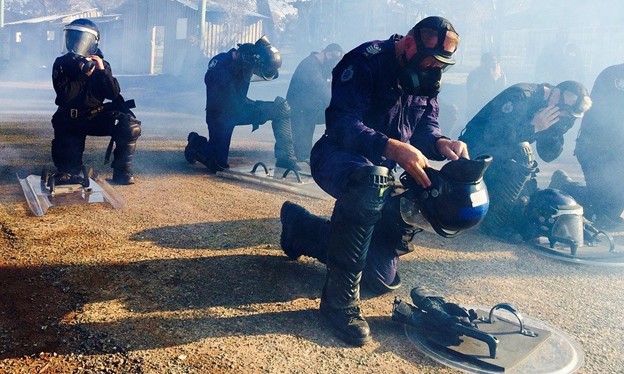 This first appeared in The Havok Journal on January 4, 2021, however the topics discussed remain relevant today.

Covid-19 has wreaked havoc everywhere. It shut the world down. It caused businesses to close. Lives were lost. One thing that didn’t change and has increased: Bad guys doing bad things. I’m not talking about speeders; I’m talking about hardened felons. In the law enforcement community, we had to stay out there, preventing crime and doing what we do. We are amongst people who may have been infected with COVID-19 and not have known. A majority of cops were not too concerned about the virus, they were more concerned about the rise of crime. They were concerned about unconstitutional rules set by politicians.

When COVID was first announced it was sometime towards the end of February or the beginning of March. Politicians allowed for only essential stores and personnel to be out. Ready for this…to include liquor stores. In, what is being called, the deadliest virus in modern history, why are liquor stores allowed to stay open? Before I get on a rant about that, let’s go over what has been going on to law enforcement since the pandemic started.

The pandemic started, eventually, things started shutting down. Driving around, I felt like every day was a Sunday morning. As a plainclothes detective, it was very difficult to conduct any sort of operation against any wanted felons because the only people that were out were cops, essential workers, and criminals. Now if you thought for a second that bad people with bad intentions care anything about a pandemic, please go lock yourself in a closet and stay there. It was insane for me to see what was going on around me. Crime went up; bad guys were emboldened and used the death of George Floyd to further their criminal enterprises. Again, I’m not talking about soccer mom speeders or very minor misdemeanors.

The next thing to close was our court system. So, if the court is closed, we can’t make any arrests. Guess what happened after that? Crime went up, shootings, robberies, etc. I don’t know what the politicians were thinking when all these rules were set in place. I get it, to limit the spread, but since when do bad guys truly care about not spreading a virus. It’s like gun control, bad people with bad intentions will always get their hands on guns.

Once courts closed, District Attorneys across the country started releasing prisoners due to COVID-19. Defense attorneys called for their client’s release. Now, these felons were let out, with conditions. Guess what started to happen, the targeting of witnesses, old gang rivalries came back. All kinds of issues. We knew that would have been a bad idea, but did anyone consult law enforcement? As far as I know, we were not. Things were just done. Some district attorneys did a good job to prevent releasing certain felons. They only let out people with minor misdemeanors. Now it doesn’t mean they are free, it just means they have to still show up to court, have their trials if it gets to that point.

I’ll never forget, this was after the death of George Floyd, one of the cops told the team to be careful because a certain district attorney is looking to go after a cop. So, what does that mean, allow myself and my team to get shot by this evil POS? Sorry, that’s not the way I was brought up or trained. Here is the thing, after I made entry, I was number one through the door with my shield. The individual went and reached for his bed, laying there was a Glock handgun. He surrendered as soon as he realized I had him already.

Now, let’s think about this, could I have discharged my firearm because of what this individual did? Absolutely. The individual was going for a handgun that would have placed me and the team in imminent danger. I did not need to though. By law, I would have been justified in the shoot, but to my morals, I was not justified. The individual knew I had the upper-hand and realized that giving up was their only option. Do you know how long it took to get to that decision to not shoot? Less than a second.
This felon we arrested, was part of the COVID-19 release program, I’ll just call it that. This individual and many others like them took full advantage of the shutdown and caused so much damage in the process.

The riots, or do I mean the peaceful protests? Ok, there were peaceful protests, but what did the police deal with? The riots, that are still going on. I believe that when you throw Motlov cocktails and IEDs at cops, you have now become an insurgency. You are no longer labeled as a protestor or rioter, no you’ve crossed that line. So even with all this lockdown talk by our fearless political officials, they stated that they can’t infringe on individuals’ right to free speech. Now, people aren’t allowed to go to church or church had to be held outside with everyone socially distant.

But let’s have a riot. It’s all good.

Here is another story: We had an officer die a year or so ago. A motorcycle rally and a fundraiser were to be held for the officer’s family. The group was denied a permit. So, they changed the name of the fundraiser and called it a protest to “back the blue.” The permits were approved. It was both humorous and sad at the same time.

COVID-19 rules got so out of hand that people were calling 911 if they saw someone outside not wearing a mask. A majority of police departments across the country would not enforce those rules because of a document called The U.S. Constitution.

My job is to uphold and defend the constitution, not use my power to infringe on an individual’s rights to privacy.

COVID-19 has brought out people’s stupidity as well as their resilience to adapt and overcome this situation. Some people did not allow a virus to stop them from living, while others were so scared, they refused to leave their houses.

For us, in the military and first responder community, we do not have a choice. I have gone into homes where disease was everywhere. I have dealt with people who had the flu, MRSA, the alphabet of hepatitis, and numerous others. Sure some of them I would not get infected with, but the point is, we still go. To us, it doesn’t matter.

To us, the line between order and chaos is a thin blue line.