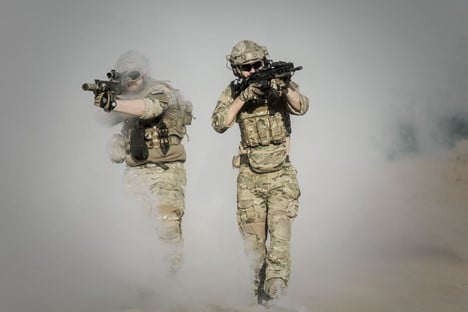 The “Old West” or the “Wild West” brought about many terms that have stuck around for years and some adages that will likely never fade. One of these being the term, “gunslinger.” Although in the later nineteenth century and early twentieth the term was nearly lost to that of a “gunman.” The gunslinger was known to be a master of their weapon and the quickdraw. Gunslinger was not a term that defined good or bad, but rather the survivor and his capabilities.

In modern times the term has faded to reminisce days past as we no longer carry sidearms to engage in frequent duels and shootouts to settle our differences. It is no longer acceptable to eliminate someone we have problems with by simply shooting them. However, some have maintained a lifestyle and proficiency with weaponry much like the traditional gunslinger. These folks dedicate their time and resources to being the best they can with the tool that may ultimately save their life or the life of another. This makes them modern-day gunslingers.

The modern-day gunslinger comes in a different variety from the past but, like the traditional term, they too are on their way out. Society’s stance on firearms and their use put limits on how they can be used to justly defend life. This ranges from the common citizen, through the military, and into law enforcement. While many citizens choose to carry firearms, both law enforcement and military service require them to be utilized. Law enforcement and the military are where we find that usage becoming the most limited.

Rules of engagement define when military service members can engage a threat with lethal force. This has changed over the years but for the most part, the wording remains the same: “force can be utilized when a threat presents hostile act or hostile intent.” In the early days of the war on terror, hostile intent was perceived as someone digging a hole in or near a travel path. This hole could then be utilized to conceal an improvised explosive device, thus creating hostile intent. It later changed to essentially saying one must see a device being planted rather than a hole simply being dug. Yes, this is more ethical but during times of war ethics and morals blur and one must rely on instinct to stay alive. The hostile act should as a term define itself, for it is when a hostile act is perceived and one’s life or that of another is in jeopardy.

“Deadly force” is the term coined for law enforcement engagements in which life can or will be taken. The threshold for the use of deadly force in law enforcement is much greater as these are not enemy combatants being engaged but other citizens, citizens the public servant is sworn to protect. Utilization of deadly force must require that one’s life or the life of another be in jeopardy and that a reasonable person under the same circumstances would come to the same conclusion. In law enforcement, after the force is utilized the scrutiny comes and the totality of the circumstances must align for the force to be justified.

Essentially, law enforcement personal must make a split-second decision to go from serving to protecting (themselves or another) and engage a perceived threat; a threat that may be perceived but not real. The perceived threat could be that of a concealed hand moving in a swift action to produce something other than a weapon. Thus leaving the fate of the decision in the hands of those reviewing the actions, not those present.

Given the changes in times and ways of the world what makes a modern-day gunslinger has changed. Today the gunslinger is not the one that out-shoots and survives but rather the one that trains and prepares to survive. Dedication to training requires speed, accuracy, and a mindset unlike any other. One must be the fastest and most accurate, as speed or accuracy alone doesn’t kill, it’s the combination. Thrown into the combination is also the mindset of what must be done to survive a confrontation.

The mindset involves the training and the cockiness that one is the fastest and the deadliest. To reach this, training must be paramount at all times. Many will state they want to train, they want to learn, but few will take the time. Fate is decided in a matter of seconds and those seconds are precious. The mindset comes first, as one must be prepared to make the decision. This requires the mental clarity to know that one’s actions are justifiable and the goal is to survive above all else.

Training comes second. Training is not only in target acquisition and live fire but in the speed of producing the weapon and getting it on target. In the military, this is shouldering your weapon, acquiring point of aim, and engaging. The law enforcement community requires extra steps as a sidearm is most likely being used in engagement and this has more commonalities of the days of the West. One must first evaluate a target, acquire the target, break retention of the holster, draw the weapon, put the weapon on target, and engage. While these steps are many, it can be done in a second or less; however, training is paramount to build this skill level.

Seconds matter, the gunslinger knows this and trains for it. They train with and without a weapon, in and outside of an engagement area. They practice in their mind and they practice in life. The goal of the true gunfighter is to overcome the enemy with violence of action, to move so swiftly they cannot react to the fate they are about to meet. The importance of training seems to be lost on those that only idolize the gunslinger, for they forget their foe is also training. The gunfight is more mental than physical yet the physical element ultimately decides life or death.

Many will idolize the gunslinger’s way of life and many will claim they are the gunslinger, yet few will ever be one. They lack the discipline it takes to do what is necessary, and without knowing, ultimately leave their fate to chance. Today the gunslinger is not the one that engages in the shootouts of the Wild West but rather the one that is prepared and ready to meet the calling of the engagement. One should not talk about what they will do, but rather they should train and persevere to do what they must hope, they will never need to do.

This first appeared in The Havok Journal on September 29, 2020.

Trey Tull is a veteran of both Iraq and Afghanistan. He entered law enforcement after the military and worked in various capacities ending his career as a K9 Handler. Trey was a certified Drug Recognition Expert and held instructor certifications in: Standardized Field Sobriety Testing, Close Quarter Combat, Active Shooter, Safari Land Wallbanger, and Less Lethal, Chemical, and Impact Munitions. Trey is currently back in school working towards his Juris Doctorate.