“Pretending To Be ISIS On Grindr.” It’s As Awesome As You’d Expect (Video)
by Scott Faith

I feel like the people who join ISIS have a lack of love in their lives.  Where is there an abundance of love?  … Grindr.”

So a while back we posted an article about people trolling the ISIS terrorist organization by “gay-hacking” their social media accounts. 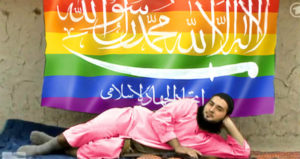 We were pretty proud of that that one.  But then we came across this comedy act of a guy who pretended to be an ISIS militant on the gay dating app Grindr.  It’s definitely worth watching:

Pretending to be ISIS on Grindr | That's The Way, A-ha, A-ha, Joe Lycett

When you go on Grindr pretending to be in ISIS. Sure, why not.