The Past, Our Future
by Marshall McGurk 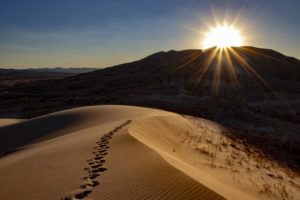 The past holds a lot;
bricks, stones, dark alleys.

And then a friend says,
“Remember our past?

Remember the team week,
the rain, the ruck, the logs.

One foot in front of the other,
in footprints of those before.

Footprints to mark the way,
your footprints will serve the way
For others to follow your past,