HomeCultureMilitaryIn 37 Days I Made A Friend Who Became My Brother 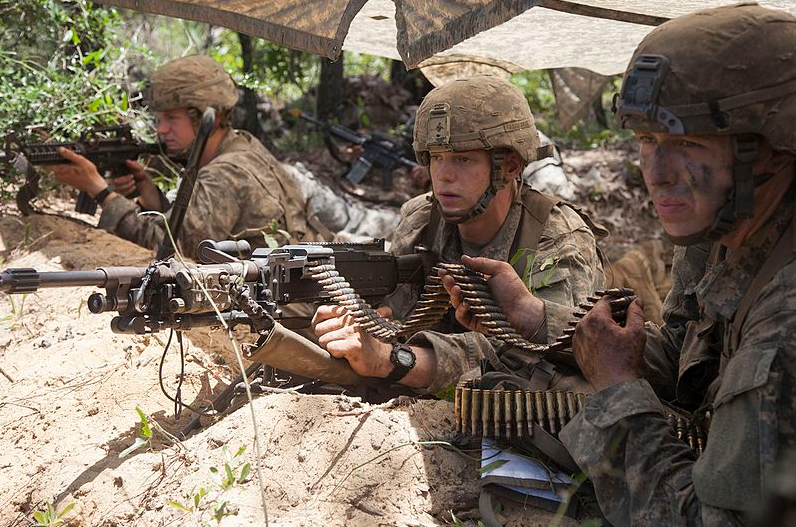 by a member of 3rd Battalion 75th Ranger Regiment

I was not one of George’s lifelong friends. I wasn’t lucky enough to have grown up with George or to have served with him at 7th Group. I knew George for 37 days. 37 days seems like a short time for most people, certainly not long enough to know someone well enough to create a friendship like you’d known each other for years. But then again, most people haven’t had the pleasure of knowing someone like George Taber.

I first met George after getting off the bus at Camp Darby. I was five days into Ranger School and already burnt out. I was tired from the following week and wanted nothing to do with screaming instructors and the menial tasks they demanded of us. I didn’t know it at the time, but George had already been in school for six weeks due to a recycle from the previous class. That didn’t slow him down at all though. He was the one rallying everyone together during the initial days of Darby–doing all the little things that no one wanted to do. He yelled at us about tie-downs, status cards, SOPs, and rules to keep us successful during school.

To be honest I thought he was exhausting. He seemed to have an unlimited supply of energy and I was feeling sorry for myself, wanting nothing to do with him or his passion for being the best at whatever he did. I didn’t realize until later in the week that George was going to be the reason we all got through the course. Throughout all of Darby, he refused to be the one sitting down with nothing to do. I watched him put his entire squad’s workload on his back for the whole phase. It clearly didn’t matter to him that he ran into bad luck and had to repeat the training. He took it on with the energy of someone experiencing it for the first time.

Not once did I hear him complain about his misfortune or the fact that he had already done this before. There wasn’t an ounce of self-pity in George. I was blown away by his ability to put everything behind him and have total focus and enthusiasm toward the challenge ahead. After a few days of watching George in action, I wasn’t exhausted or annoyed anymore. I was amped up, ready to follow him and get after it. He had all of us mentally switched on and because of that, the majority of us were successful in moving on from Darby. I had barely gotten to know George and he had already made an impact on me. Moving on from Darby I was given the biggest gift someone could get arriving at Camp Merrill. George was moved to my squad. One of the best tips when attending Ranger School is to treat it like it’s real. Take every class and training exercise seriously. Go out into the field and take each step like you’re deployed, doing the real thing. It’s heavy advice and easier said than done.

George was the only man I saw at school actually taking that advice and living it every day. No matter what we did George was at the front. No matter how far we were going George was carrying the heaviest ruck. George contributed the most, rested the least, and asked nothing in return. He just stepped out with a smile on his face and an energy that rubbed off on the entire platoon for the better. Countless times I’d be pulling security or just sitting on a knee waiting for the next tasking. The little voices in your head can turn into screams in dull moments like that. I’m hungry. I’m tired. My knees and my back hurt. I’d look around and think, there’s no way the instructors can see me all the way over here. Why not sit down and rest a little bit? Why not close my eyes and catch a little snooze? During the scan for instructors, I always saw George though. He was always doing the right thing and I could see in his eyes that he had already told the voices he was hearing to shut up.

George set the example every day and seeing that strengthened my resolve. Being around George was like shot-gunning an energy drink when you hadn’t slept in days. He had an effortless way of boosting everyone. I never thought I would laugh as hard as I did in a school that promised not to feed us or let us sleep. I’d be feeling miserable, sitting in a mud pit during a rain storm and George would be telling us stories about Alaska, Florida, or one of his South American adventures that had us crying with laughter. Our faces were sore from smiling so much.

I’m still convinced to this day that George had the ability to just not feel hunger, pain, or fatigue. He is the true definition of a brother. Every time I was put in a graded position George was my Team Leader. I never had to ask him either. The instructors would call my name and I’d look for him to help. He always found me first though. He’d smirk and just tell me not to worry because we were going to crush whatever was getting thrown at us. I did not pass any of my graded evaluations during my time at Camp Merrill. George passed them for me. George worked his ass off to make me look good. He made sure everything and everyone was exactly where they needed to be so I could simply execute and pass whatever mission we were tasked with.

George didn’t do this because it would affect his own grade or success. He did it solely because of the man he was. He put every single member of our squad before himself. Because he cared for and loved all of us like we had known each other forever. George taught me more about being a leader than any class or training event at the U.S. Army’s premier leadership school. He taught us all what it meant to be selfless and to really look out for your team. He taught us how simple it was to just decide to not allow the negative things in life to overcome your positivity. He taught us all what it meant to put the team first.

Due to unfortunate circumstances, George had to recycle Mountains and stay behind while the rest of our Squad moved onto Camp Rudder in Florida. All of us were thrown off completely when the cadre called his roster number for the recycle group. The wind was taken out of us, and we slumped around, not even excited about moving onto the final phase of school. It just didn’t feel the same knowing that George wasn’t going to be coming with us. But, like always, he pulled us up. He told us all not to worry about him, he’d be fine. It wasn’t a big deal, just another obstacle that he would navigate on his way to graduating.

He was pumped for all of us, wishing us well on the trip to Florida. The last time I talked to George was while waiting for the bus to the airport. We joked around, talked about how we were going to plan a skydiving trip together in a couple of months, and that I’d be at his graduation a couple of weeks after mine. I didn’t know that that would be the last time I would talk to George. If I would have known I would’ve told him what an impact he had on me, as a soldier and as a man. I would have thanked him for everything he’d done for me, for all of us. I would’ve given him all of the praise and thanks he deserved but never asked for.

During the final days of the Florida graded patrols, we were all told to leave our fighting positions because the Battalion Commander wanted to speak to us. I assumed it was going to be some boring run-of-the-mill motivating “you can do it” speech. I had no idea he was going to tell us that there was an accident on Mt. Yonah and that George was gone. I felt like I got hit by a bus after hearing his name. We all did. An entire group of men, some of the toughest I’d ever met, were instantly broken over hearing that George was gone. All of us cried tears of anger. Why George? He was better than all of us. He was supposed to be in Florida with us, he deserved to be here, more than any of us. We felt anger and pain that had us clenching our fists and sobbing, ready to break down and fight the world all in the same moment.

I’ve been fortunate enough to have served in the Army for just over eight years, never once losing a brother with multiple deployments, not a scratch. I had no idea how to deal with the feelings of losing George and finishing the final days of the course. None of us did. After a long silence, everyone became together though. George wasn’t physically there leading the conversation we had, but in a way he was. We talked about our brother and what he would want us to do at that moment. We talked about how he’d want us to continue on, to look out for each other as he did for us. He’d want us to remember the man he was and follow the example he had set. Finishing the rest of Florida was the hardest thing I’ve ever done and I was only able to do it because of George. The fire he lit inside of all of us ensured that the entire group finished strong.

37 days is a drop in the bucket compared to a lifetime. But in 37 days I made a friend who became my brother. He taught me more about being a leader than I thought possible. He made me a better man and I will be forever grateful for having received those 37 days.