HomeCultureMilitaryImpossible is nothing to someone who tries 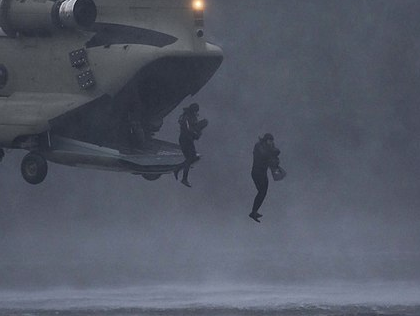 This first appeared in 18 Series Bag Company on March 18, 2022. It is republished here with the author’s permission.

The second SITREP in our series covering enterprising SOF personnel. Now that the Originals are covered (see the last SITREP), my brothers in 1st Special Forces Group (Airborne) have taken the intellectual side of pipe-hitting to a new level, and as Iron Mike says, “Impossible is nothing to someone who tries”, this SITREP is dedicated to them.

The Brief Before Impact Podcast

Last year, I accidentally ran into Matt’s podcast. I was attempting to understand the COVID-induced bull-whip effect in our supply chain. I searched through the available podcasts and stumbled upon episode 39 of the Brief Before Impact podcast, ‘Fix the supply chain already’. I have a master’s degree in Supply Chain Management because it’s of interest to me, however, I don’t work in the field and lack the data to know what’s really going on globally. Throughout the episode, the host, Matt, broke down each section of the supply chain, including labor shortages, so that even an ogre-like me can understand. Turns out, Matt is a former Intelligence Sergeant from 1st Special Forces Group (Airborne).  It all makes sense.

In my opinion, the Special Forces Intelligence Sergeant (18F ‘aka’ fox) is best in class. Most intelligence folks pass off their analysis with a certain degree of confidence, handing you a slide deck with Cheetos-covered fingers, waiting for a knee to bend and touch the ground indicating the blessing bestowed for this omnipotent intelligence. The 18F is so confident in his own analysis that he risks his own life on the intelligence that he’s gleaned, heading out with you to capture/kill the target. Nothing is more reassuring when your team is on target than when your Fox is pointing at the target house nodding up and down. Otherwise, it’s your weapons teammate looking at you and shrugging, giving you the ‘probably’ look. The 18F is an incredible asset. Matt, unquestionably, brings that same analysis to his podcast, Brief before impact.

After graduating from college (with a BS in Poly sci), Matt enlisted in the US Army as an 18X-ray (See SITREP#13 about the 18X-ray program) in 2011. Three years later, Matt found himself jumping Halo, speaking Tagalog, and training Thai Special Forces operators, later hosting the Taiwanese Special Forces for a training event in the United States. In 2016, yet again proving that he is smarter than all of us, Matt brilliantly transferred to the SF National Guard, finishing his Master’s in International studies. His SF detachment sent Matt to the 18F course, allowing Matt to refine his analysis skills. In 2018, he further refined his mental agility by attending Russian and French language courses. This guy’s data sponge.

Here’s what’s funny, I’ve texted him on the side to further discuss points and he quickly responds each time, just like every Fox that I’ve ever had. I asked him how he fell into the Podcast and his reply was simple, “It was my experience as an 18F that led me to start the podcast. I want to explain geopolitical events, happening thousands of miles away, that has an impact on regular Americans.” I listen to every podcast he drops; I recommend everyone else do the same. Check him out on Spotify or Apple Podcast, and find him on Instagram @briefbeforeimpact. Keep them coming, I’ve become a dedicated listener.

The 18 Series Bag Company debut was officially at SHOT Show, in Las Vegas, 18-22 January. It was an overwhelming success. I received no fewer than 100 business leads, spoke with dozens of government agencies, saw some old friends, and only got into two Tics (troops in contact), eventually kicking one of the guys out of my booth (I felt like the guy was secretly videotaping and baiting me to say something controversial about the executive branch. So, if you see me on YouTube telling someone (with appropriate verbiage) to get out of my booth, that’s the context. The second Tic, I’ll bring up in another SITREP.

On the outside of my booth, I placed my Green Beret on our manikin. It was a great conversation piece and contrary to what Kyle Lamb said, the manikin, with Chief Warrant Officer Three rank, was working, NOT drinking coffee, and being value-added! An obviously distinguished gentleman stopped by my booth, pointed at my beret, and told me he had one just like it. After the sniff test, Bone Fides was met, and we instantly hit it off.

Michael Beavin (Mikey Bee), a former Warrant Officer from 1st Special Forces Group, created Smoked Bros, a spice and seasoning company (How awesome is that?). Don’t let them fool you, Green Berets are particular about their food and drink. After years of sub-Saharan African goat grabs, Iraqi Kebabs, or Afghan rice, GBs get picky when they get home, so much so that there is an entire website dedicated to the culinary delights of Green Berets (don’t ask, I’ve already written too much, Fight Club rules).

Mike has blended his culinary expertise with being a badass as he, “develops kinetic flavors with surgical precision”. Since linking up at SHOT, Mike and I have done a couple of zoom calls as he helps me as I build my brand, he has offered to help our upstart in any way that he can.

Like me, Mike is utilizing his experience in foreign countries to develop his brand. 1st Special Forces Group’s geographic focus is South-East Asia (PACOM). Mike recounted how he developed his Red Panda blend from his time working in Thailand, or his Bulgogi blend from his time deployed to S. Korea. When he returned home, Mike worked with Chefs on his domestic flavors. I came home with a bottle of Point Man and did my best from hiding it from my two domestic terrorists. My two boys have become foodies and found Point Man. Now it’s become a staple for their culinary adventures, making the Smoked Bros subscription a must for my family. With 17 different blends, he has something for everyone. To give back, a percentage of every purchase goes towards warfighters, first responders, and underserved communities. This dude is legit. I’m proud to know you Mike and look forward to seeing what you create next!

I appreciate everyone’s amazing feedback; I already have 3rd Special Forces Group in the hopper.