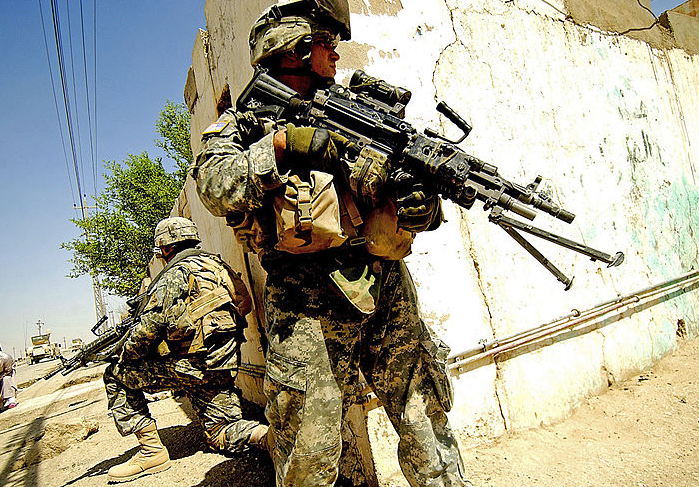 Editor’s Note: Some of the fiercest fighting in Iraq took place during the U.S.-led effort centered on seizing, stabilizing, and sustaining Ramadi. This is the story of one Marine who fought there and his reaction to seeing the black flag of ISIS now flying over the city. This first appeared in The Havok Journal on June 9, 2017.

Baking in the noon sun, I stood at my post surveying the palm grove east of our position at the northern entry control point to Ramadi, Iraq. As I observed the rooftops and open windows lining the palms, a shot rang out from the vehicle searching area below. An Iraqi police officer waved his AK-47 at an oncoming car and began firing at the street in front of him, warning the driver to stop. 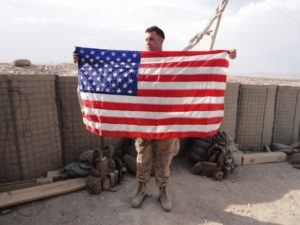 I peered out of my post, from behind the M240G medium machine gun, not knowing where the fire had originated from. Edging further around the bullet-resistant glass which, sat along the front of the post, my weight being held by the sandbags which, lined the area.

As I stretched my neck and strained my eyes to see what was going on, a snap came from the left. Glancing to the left, where the snap had originated, I watched as sand in the bag next to my head began to pour out of the perfect hole made from a sniper’s bullet.

Pulling back into the safety of my post, I charged the 240, locking the bolt to the rear, ready to engage. My mind raced as I scanned the rooftops and windows around the area, looking for a shooter but the ghost was gone.

Two weeks into my first deployment I had experienced my first close call in combat….it would not be my last.

The day I graduated boot camp, a flag was flown over the U.S. Capitol building in Washington DC. My family gave it to me as a token of appreciation for my service. That flag would travel with me everywhere I went; on two deployments to Ramadi and a third to Kajki/ Sangin Afghanistan.  I would tuck Ol’ Glory into my ruck and carry it on every single mission, whether training or out on patrol.

Throughout my first enlistment in the Corps, I would train for nothing but Ramadi. My proving ground would be MCAGCTC, better known as 29 Palms California, a barren expanse of sand and rock settled in the southern portion of the Mojave Desert. Being in the desert embedded unit of 3rd Battalion 7th Marines meant understanding both open terrain conflict and urban warfare. We trained hard, as a unit, knowing that we would soon be thrust into the fray of Al Anbar’s deadliest city.

Everything revolved around knowing the enemy and how they operated. By “turning the map around” we looked at the battlefield from the enemy’s perspective. What were their primary means of attack, withdrawal and, defense? How would they hit us? Who were their friends? Where did they sleep? Anything we could do to gain an edge on the opposition. By the time we deployed as a unit, we were a well-oiled machine, capable of taking on any enemy force willing to tussle.

Whenever possible, while serving overseas, I would unfurl the stars and stripes in a defiant gesture against the enemy. One such opportune moment arose, in 2005, when my team had been sent to the government center in the heart of Ramadi. I took the bullet-riddled staircase to the roof where Marines sat vigilant under cammo-netted posts. I removed the standard from its secure position in my pack and took the perfectly folded flag to the pole at the center of the roof. I hooked the grommet near the blue field, then attached the second at the bottom. As I pulled the rope the flag caught wind and rose into the air; billowing in all of its glory.

Raising that flag was a simple gesture but it meant so much to me and the Marines with whom I was serving. It is a symbol of freedom that we would honor and protect at all costs.

Now, another flag flies over the city of Ramadi, the black flag of a conquering horde who has set its sights on mayhem and destruction. They claim to be righteous with a power bestowed by God, however, their intentions are anything but holy. They put people in cages and set them ablaze. They torture children to prove their faith and allegiance to a cause that can only be defined as insanity.

Who will stop these heinous tragedies from occurring? Only those with the resolve necessary to strike fear into the hearts of the enemy through violence of action and without remorse.

Iraq has been a battleground for a millennium; It has seen its share of conquerors. The recent taking of Ramadi, by ISIS, was not something I took personally. As a Marine Corps infantryman, I was called upon to serve our nation in a conflict that would eliminate an enemy who had brought death and destruction down on the Iraqi people; Saddam’s regime. My opinion didn’t matter then and it doesn’t matter now.

I am not an expert on geopolitics, nor do I believe that I can solve all of the world’s problems from my fighting position on the front line. I am a Marine and, although I no longer wear the uniform, I still work tirelessly to provide those still serving with the knowledge, wisdom and, guidance they need to be our nation’s premier fighting force.

So don’t ask me my opinion on this new conflict. Ask me how we train future generations of warriors who will remain steadfast and vigilant, capable of taking the fight to the enemy’s doorstep once more.

Because other wars will be fought and other flags will be flown over Ramadi.