HomeCultureMilitaryWe Enlisted for the Last Drops and The National Treasures 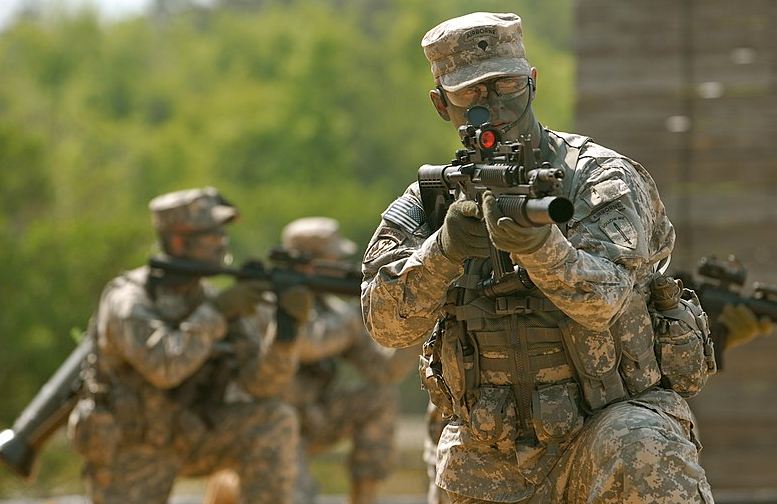 “We Enlisted for the Last Drops and The National Treasures.” Seriously though, what the hell does that mean?

What could those three items, taken separately, possibly mean?

So, no shit, there I was, on my 24th birthday on 06 November 1986, yes I was born on Election Day, standing there in the Indianapolis Military Entrance and Processing Station (MEPS), easily, easily, the oldest and potentially the most educated knucklehead with an Undergraduate Degree from Miami of Ohio in hand.

Young CPT Brown says “Please raise your right hand for the Oath of Enlistment” and 54 of the 55 right hands in the room shoot up. “Your other right hand” she barks.

Slowly and sheepishly, being the owner of that 55th dick-skinner, I obeyed the first of many orders in a very unique 20-year military career.

So there I was, two years out of college, my first I had squandered playing Minor Pro Hockey in Europe after having spent the last four years drinking and skating my way through Miami (both pursuits at the D1 level, I might add) which was followed on by my engagement to my betrothed and then a stint in the sales world. Selling what you might ask? Wait for it… Wedding shit, I mean garter belts, cake knives, those miniature dumbasses standing at attention on the top of the wedding cake, the whole deal. No daily grind there, it was a living Hell!

In the meantime, my better half was following in her father’s footsteps, a three-time DIII Nation Championship football Coach at Wittenberg University, soon to become their Athletic Director.  She completed her master’s degree in Sports Administration at Ohio University and promptly landed a fantastic job at the Indian Hosier Dome and Convention Center (now the RCA Center).

As luck would have it (you know “Luck” that twisted word we use in so many ways) she ran into three Hi-Speed, Low Drag, Teflon Coated studs who were at Ft. Benjamin Harrison for a Command Sergeants Major promotion board.  These were bonafide Warriors!  A Tank Brigade Commander from Ft. Hood, the Commandant of JFK Special Warfare Center, and CSM from 1st SFG, then located in Okinawa.

“The Army?” My wife says to them…” My husband might want to hear about this! As selling garter belts, without the women attached, isn’t really working for him”…

Over coffee, I engulfed their stories hook, line, and sinker. Two weeks later was the 6th of November, 1986.

Damn, we were excited! Driving all the way back to Ohio to share the “The Big News.” In retrospect, phrasing it that way may have led our mothers to a different conclusion…

The scene played out in duplicity, with both sets of parents. My Dad, who had pretty much done the same thing back in 1950, dropping out of Brown University to try and make it to Korea, beat my Mom to the punch, as her dreams of knitting baby socks just got flushed down the crapper.

“You’re shitting me, right? Tell me you’re Shitting me?”

Not only that, we enlisted for the Airborne Ranger option! I’ll get to jump if of plans, compact all the discs in my back by landing like a bag of hammers, and generally fulfill all my masochistic dreams that I’ve been harboring these last 24 years!

What I didn’t know at that point, was I had taken the initial steps into one of the most tightly-knit Brotherhoods known to man. The 75th Ranger Regiment. And that “We” part of enlisting would become an integral part of my Army dynamic as my wife, family and I negotiated The Good, The Bad, and The Ugly challenges of life in the Big Green Machine.

I always knew it

I have the distinct pleasure of working for a company that sponsors the Best Ranger Competition. This past weekend, for those of you who weren’t watching The Masters, 53 teams battled it out in the Army’s most grueling competition; The BRC.  As “Luck” (and a tremendous amount of Intestinal Fortitude and Skill) would have it, two Rangers from the 75th Ranger Regiment hoisted those coveted 1911 pistols and carved their names in the annuals of history.

The BRC is also a watered-down “Ranger Rendezvous,” where many Rangers having served in the 75th (in many facets) come to spectate, donate and pontificate over the weekend about “Back in the Day.”

A very unique event, within an event, happened this weekend and 99.99% of those attending and following the BRC would never know about it.

During the Sponsor Dinner Saturday night, LTC (Retired) Joe Rippetoe (whose son CPT Russell Rippetoe, a member of 3/75th was Killed in Action in Iraq this same week 14 years ago) arranged a toast to LTG David Grange (name sake of the Best Ranger Competition), and a living legend among the Ranger Brotherhood, and his son, Russell.

This toast came from an aged bottle of wine that LTC Rippetoe had bought at a BRC silent auction approximately ten years ago, which, with much foresight, he had LTG Grange sign at the time. 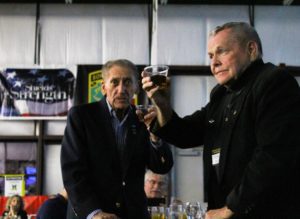 As the aged warriors and the other 200 Rangers, spouses, and friends, in attendance toasted CPT Rippetoe, it was apparent LTC Rippetoe’s wine had become bitter over time.

LTG Grange hammered his down, inverted his glass, and watched as the last drops descend to the floor. As I observed from five feet away, in the time it took those drops to cascade to the floor, my mind raced and I began to think of how many times this 93-year-old Veteran of three major engagements, earning the Combat Infantryman’s Badge, three awards, had performed this very solemn tradition. How many bottles of wine would those men he has toasted represent? That Battalion of drops, raining to the floor, represented so many tear-stained faces of families and comrades left behind by fallen American Warriors. That man, and all like him, are national treasures. My heart stirred knowing it was in the presence of a very unique and very special moment. To be part of this toast, with two living Legends standing feet from, that commemorated a fallen ranger, Son, and Father. My God, what an Honor.

The small gathering of the Ranger Brotherhood in that room, at that moment, represented decades of combat, training, and military experiences, whose essence can only really be understood and captured by those who have lived it. And “by lived it” I mean their comrades and families. Other veterans outside that room can certainly appreciate it, as they too have their unique experiences, stories and communities that tell their own tales.

But this Brotherhood, the one who lives a the tip of the spear is extremely special. Those Rangers present (past and future) represent a small fraction of one of our Countries true National Treasures.