HomeCultureVOTE: Should All Branches Of The Military Use The Same Uniform? 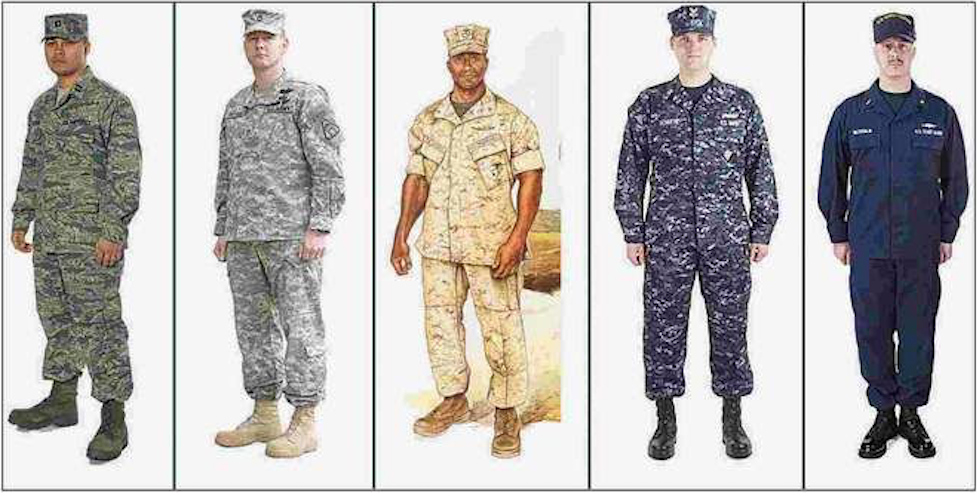 Despite the fact that the new National Defense Authorization Act (NDAA) has been passed into law, including a provision to require all branches of the military to wear the same uniform – it still hasn’t happened yet. There are currently over ten different standard uniforms across the military; everything from the U.S. Air Force’s “tiger stripe” digital pattern to the Marine Corps trademarked “MARPAT” pattern. The U.S. Army has even just recently announced an adoption of their third pattern in the past decade, a slight deviation of the popular Crye Precision “MultiCam.”

Many people, both in and out of uniform, have an opinion on the issue. Some say that this is the mother load of wasteful government spending in a time when sequestration still looms on the horizon and pay and benefits are on the chopping block; while others say that the different branches perform different functions, and thus need different uniforms – and in some cases it could mean the difference between life and death. There is yet another group that says regardless of how you feel about the issue, Congress passed a law requiring one uniform and the military needs to follow the law. We would like to open it up to the readership though – how do you feel about this? The results will be used in a future article that addresses this issue in a more in-depth fashion.