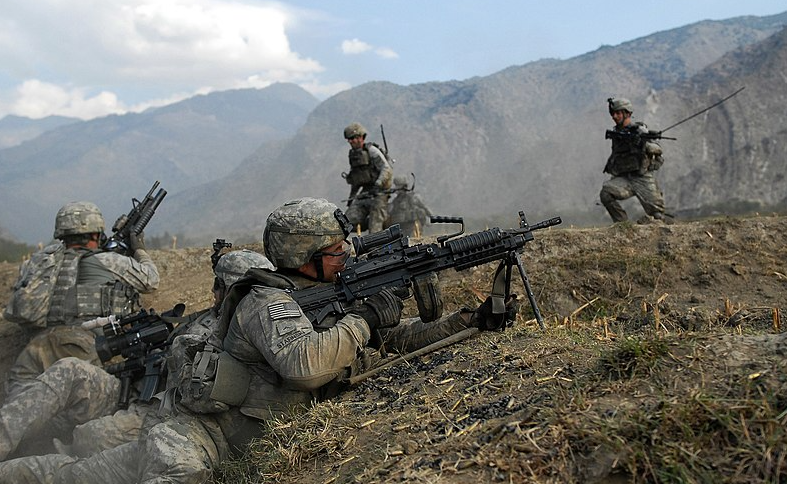 After receiving a U.S. Army Reserve recruiting brochure in 1996, I was convinced the Army was my path. Since age five when I declared I wanted to be “a tank when I [grew] up” (it made sense to a five-year-old), I had immensely enjoyed strategy games and loved studying war. Completing my BSA Eagle Scout rank requirements that year, I saw an intersection of my leadership talents and military history passion – being a soldier made the most sense in my life at that point. Enlistment began the career I embarked upon – later an officer who learned and exercised tactics and strategy, following in the footsteps of famous generals like Patton and Eisenhower.

Ideas of killing others and seeing loved ones die were only fleeting thoughts in my mind in those young adult years – seeming merely an unfortunate “necessary evil” in war, toward reaching the ultimate desired strategic end of any conflict. Never did I imagine I’d one day deal with trauma related to killing or warfare, nor did I believe a change of religious convictions would move my mind from the “Just War” theories I held.

The thrill of surviving the D.C. sniper attacks in 2002 as I visited family in the Maryland, Virginia, and D.C. area was the closest I had come to any type of combat until I deployed in 2004 to Iraq. From 2004 to 2005 however, I engaged in multiple firefights in Mosul, and later Tall Afar, losing quite a few comrades I knew including my then commander, Captain Bill Jacobsen in the Mosul chow hall bombing.

The “excitement” of war left me, and I faced the grim reality of three “what’s”: what I had done to kill others, what I had not done for others (to save them), and what hope I had to see my wife again as she gave birth to our first daughter that year (since I’d been twice injured by roadside bombs that year). I mourned, prayed, and wrote journal entries to deal with these concerns, but otherwise, I suppressed them. When I returned home, my defensive driving, disturbing dreams, and disconnected feelings (to society and large crowds) began to fade with time, and even loud noises had less of an impact on me.

I barely considered techniques, resources, tools, or other options to cope with the trials of violent combat trauma. I thought those with Post Traumatic Stress Disorder either had a worse time in combat than I, or just handled it differently. I didn’t know nor connect any of the suppressed symptoms I experienced. Compared to the first deployment, my second in 2009 was relatively quiet, and many symptoms were dormant until train-up for a third deployment (this time to Afghanistan) in 2017 in the First Security Forces Assistance Brigade.

Along with my new faith convictions the preceding years rattling in my mind, I experienced anxiety near large crowds, loud noises, and intrusive memories of my first deployment while at work. At night, disturbing nightmares led to my sheets soaking with sweat, while I woke to ensure the house was secure, hearing a non-existent doorbell ring at 2 am. I felt distant from my wife and kids, almost as if to prepare them for the “inevitable” loss of their husband and daddy, respectively.

The pain of telling my boss and soldiers as I gave up my command was a difficult but necessary step in identifying the problem and getting help. With support from the chain of command, the unit chaplain, and the Military Family Life Counselor, I saw one of the DoD’s 10,000 civilian behavioral health providers for individual therapy.

My group therapy was led by a retired Sergeant Major with over 20 years, five deployments, and his own PTSD experiences, and the 12-week combat trauma recovery REBOOT class helped too. Several therapists echoed my sleep therapists’ comments on the fact that 50 percent of PTSD-related issues could be alleviated with proper sleep. I never even thought of having hormone levels checked as some suggest to examine testosterone, nor was I familiar with what I’ve recently heard about neurofeedback methods which sound promising.

The people I met with and the classes I took helped a great deal, but I want to share what benefits me the most even today: help from above in the form of scripture, counsel, prayer, with support from my family and those in my faith with whom I enjoyed fellowship. During self-reflection while co-facilitating a trauma-recovery class, I developed this mnemonic tool to help when PTSD symptoms (or any trauma) arise:  PTSMI – Prayer, Thanksgiving, Scripture, Music, Influences – I pray it proves useful for others as I briefly explain.

Prayer.  Like parents who have children, the Creator who designed us did so for us to enjoy each other’s company in a loving relationship. He understands us more than we do ourselves, and if we walk in obedience to God and His Son in a relationship with them, we will receive help and answers: “If I regard iniquity in my heart, the Lord will not hear. But certainly God has heard me; He has attended to the voice of my prayer”, “Confess your trespasses to one another, and pray for one another, that you may be healed. The effective, fervent prayer of a righteous man avails much” (Psalm 66:17-18, James 5:16, NKJV).

Thanksgiving.  In Psalm 77, we see a change in tone halfway through.  Asaph shifts his thinking to remembering “the years of the Most High.”  It is more than positive thinking – when we are thankful, we remember the ways we’ve been blessed, and how much worse things could be. When giving thanks, our minds go to a better place where we can come before God’s presence, entering His gates as Psalms 95:2 and 100:4 state. When we combine prayer “with thanksgiving,” we experience the “peace of God, which surpasses all understanding” which in turn guards our “hearts and minds through Christ Jesus” (Philippians 4:6-7, NKJV).

Scripture. In the worst of my PTSD symptoms in 2017 and 2018, it was as though I tried to ford a raging stream in the fog at night, having no clue where to step – any stepping stone I could barely see of the path forward might be my downfall.  Scripture gave me not only stories of encouragement and faith with lessons to learn, but valuable truths I could use. While memorization kept my mind active, hiding God’s word in my heart not only helped me not sin against Him, but also it lit my path, guiding my decisions and way across the stream (Psalm 119:11, 105, NKVJ).

Music. Music therapy is no secret today, but Paul and others recognized it thousands of years ago as he wrote in Ephesians 5:19. Even David played music for King Saul to calm and refresh him (1 Samuel 16:23). This cannot be just any music – Jesus warned us to take heed to “what” and “how” we hear in Mark 4:24 and Luke 8:18. Is the music hateful, gloomy, and depressing, or rather uplifting, spiritual, or even wordless?

Influences. Like the music, what good and bad influences do I have in my life? We must remove the bad and add good. Influences could be habits, thoughts, or even people. We are warned to not take advice or counsel from the ungodly. Do I need to distance myself from a negative person who drags me down as Psalm 1:1 implies? Certain habits and thoughts can be sinful, but others can be simply a burden or weight – something lawful but not beneficial, helpful, or edifying as Hebrews 12:1, 1 Corinthians 6:12 and 10:23 remind us. What habits do I need to rid myself of? Are there any thoughts I need to control or defeat?

I may need to deliberately add positive influences in my life. If the bad disappears but we don’t replace it with good, the bad can return or ‘worse’, as Jesus warned in Luke 11:24-26 (the ‘swept and put in order’ here in the Greek means ‘proper arrangement’). The foremost and greatest positive influence to keep us guarded safely in peace would be the presence of God and Jesus’ spirit, which we must ask for and obey to receive (Luke 11:13, 21, Acts 5:32).

Finally, what positive projects for family, friends, work or my community could I add to influence my life and heart? Working on something useful or doing good for others can add a greater sense of purpose to our lives, especially if we do it all for the right reasons as scripture implies (Galatians 6:10, Colossians 3:17)

I cannot change the past, and feelings or thoughts will still come and go. Yet when I apply the above, I am empowered to overcome, and I pray the same will be true for you and those you love.

This first appeared in The Havok Journal on September 8, 2020.

Matt Sacra is a U.S. Army armor officer and instructor in the Defense and Strategic Studies Program at West Point. The views expressed are those of the authors and do not reflect the official position of the United States Military Academy, Department of the Army, or Department of Defense.