James and his roommate at the time, two medically retired Rangers, had to move in the middle of Virginia’s harsh winter.  This included all their animals, the farming equipment and the house. They lost so much. Although it seemed nearly impossible to find somewhere to lease with all their animals, they thankfully found a house to rent through the end of March in 2017.  Finally, they thought they could relax.

While dealing with all the stress of his family situation, Webb began a relationship with a local girl.  He felt some sense of normalcy and a place of refuge within this young relationship.  Then, in the spring of 2015, Webb received shocking news that he was going to

“As a Ranger, becoming a father is profound because you are not only molding a young man, but your own son. All the pain

and hardship can now be considered worth it because I have something to teach my son; life 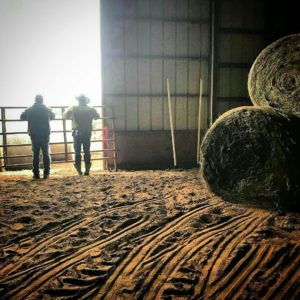 experience. For example, every time it rains, I must cut a tree off the fence, or I have to check for calves when I’m already tired as hell from tossing square bales, it’s me looking out for my little ranger buddy and to have something I can leave him. He has helped me remember the laughter and happiness of youth, something that gets taken away by the raw reality of a traumatic injury or service in an Army at war… in the most bloodied unit in the military. I wanted to leave him a choice to either live off the land or go into a different career. In a few more years, there won’t be an option for younger generations to buy their way into farming, so it’s important for me to make it, in order for my son to be able to even have the option of a life like mine,” said Webb.

Webb and his now ex-girlfriend still work together raising their son. It has not been easy for Webb, and he will say that it’s probably the hardest thing that he’s had to face because he doesn’t want to miss anything his son does, but he is keeping his eye on his son’s future and knows every minute with him is a gift.

Webb has learned over the years and particularly through this relationship that many women enjoy the idea of being with a man in uniform, but not many want to deal with the reality of one. More on this topic later.

Now, fast-forward to the middle of 2016 and the landlords of the rental house decided to sell their place in the middle of summer.  So, there they were, two Ranger buddies.  They, and their horses, their dogs, their cats were soon to be homeless. At this point, Webb decided to utilize the acreage he had purchased from his parents and have created their own little Ranger paradise, or FOB Jamestown, as they now call it. Every morning, Webb wakes up 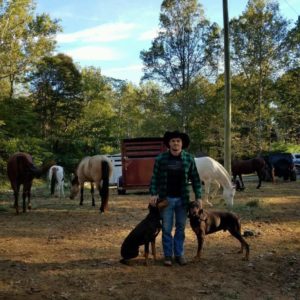 to the beautiful view of the Blue Ridge Mountains and his horses ready to eat breakfast.

As I said previously, transition into the civilian world after a rewarding career in the military is difficult. Webb faced this, though it wasn’t of his choosing, and he left the military injured and not ready to face a new civilian lifestyle while the war was still going on. From his experiences, Webb believes that every Veteran should take six months to a full year off after getting out of the military to decompress and reengage the civilian world. He’s had numerous buddies come to the ranch to wind down, do some work, get in the saddle, and get their life in check.

The ranch, is a steadily growing operation in the mountains of Virginia.  This man is not only connecting the land of our founding fathers and the Nation’s finest warriors, but he is actively bridging the civilian-gap to provide the United States and the world more food. Can it get more American than that?

“I feel independent and not reliant on the human machine. I had a lot of anxiety after being hurt about being able to take care of myself. I used to jump out of planes and walk 30 miles, now I can’t walk a mile. So, having a horse to carry me through the mountains and being able to make money on my own and doing it based on weather (or circumstances out of everyone’s control) is a lot easier to handle to me. I have a calf and that’s a new animal that wasn’t there before, I created something. I go out to a patch of dirt, grow some grass, and bale it up, bring it over to another patch of dirt with grass and give it to my cows and every year I have more and more,” said Webb. “I make food now, so I’m still one of the pillars of society and feel like I’m helping America, just in a different way. I’m up to 82 head now and steadily growing.”

Webb will be expanding his operation so that when his brothers want or need to come work a summer in between contracting or going to school, they can. He will eventually build another big barn to store his John Deere equipment and all the hay. He will have six hack horses and a log cabin built by his own hands with a fire pit just so his buddies can come and sit and tell their stories in all their glory. Please check out Conway Cattle Company on Facebook and Instagram.

Webb’s tenacity to make positive change in his communities, both in Madison and in the brotherhood, and his commitment to the preservation of that sacred American land are inspiring and admirable. He is a true example of living the Ranger Creed and I am proud to be the first to share his story.

This first appeared in The Havok Journal November 21, 2018.