Throughout the seemingly never-ending surgeries and countless doctor’s visits, Webb knew that he needed to keep his mind busy realizing that he was no longer overseas with his brothers.

“Finding something else that I love to do every day and something that makes me still feel like a man was really important when I started my post-military life,” Webb said. 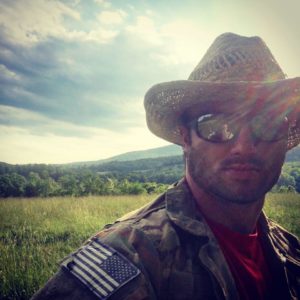 Since that time in the hospital, Webb dedicated his life to farming at the base of his beautiful Blue Ridge Mountains. The Ranger Regiment isn’t for the faint of heart and neither is farming.  He agreed on a plan with his family to take over the farm with the settlement from the accident and military retirement. Webb replaced the fencing, built two sheds for the equipment, a whole new 40×60’ shop with concrete floors with a lift, a 40×60’ pole barn for hay storage, updated the house, as well as, clearing the land to make it profitable.

“I tried stock markets out and lost a pile of money because of what people think, at least with the horses I feel like it’s more in God’s hands,” mentioned Webb. ‘Every one {horse} of them is a genetic miracle and the only one like it, so each one is special. You can’t make them in a factory like an iPhone or a car, it has to be born. That to me has more soul in it than standard investment practices, plus it’s competitive. Ever since my trainer and I partnered up, he’s been in the top ten and I want to be part of his success when he becomes the best in the world. Horses and cattle, livestock instead of dead stock, feels more American than working at a random company making plastic wrappers for pills or something.”

To this very day, Webb learns from the best farmers in Madison County, father and son operations, Axsel and David Falk and EJ and Brent Aylor. Webb spent the first year sitting shotgun in their John Deere tractors, learning the trade and creating a reputable name for himself in the community, which can prove to be difficult in a small town, especially as a Veteran.

Webb is truly humbled to farm alongside such hardworking and brilliant men.

“Finding civilians who work just as hard to provide for their future was something I didn’t think really existed this day and age. I was wrong and have found brotherhood outside of the regiment,” said Webb.

The average American farmer is 58 years old, according to the 2012 Census of Agriculture. Farmers over 55 control more than half of the country’s farmland, and one in two is likely to retire in the next decade. Since 1987, there has been a decline in the number of new farmers joining the ranks, with only 17 percent at the beginning of their farming careers — with less than a decade of experience.

“When you look at the population growth, we’re naturally going to need more and more producers to keep pace with the growing demand,” says Karis Gutter, the USDA’s first military veterans’ agriculture liaison. “The veterans’ cadre looks very promising for us.”

This was exciting for Webb. Civilian life had turned around for him.  However, life has its hurdles as you transition out of the military and difficulties started purging into Webb’s quiet world.

At this point for Webb, it seemed to be one thing after another.  He was losing buddies overseas, losing a few to suicide, and his relationship with his family was deteriorating.

After Webb did all the improvements to the family farm, his parents decided to go back on their agreement, retire from their jobs, run the farm and kicked Webb off their property. They have yet to pay their son back for everything he’s invested into that farm. Webb recalls that they even threatened to call the VA on him after personal differences of opinion. Unfortunately, these kind of lash outs and using a soldiers service against them happens all too often within the military community and the “families” that they come home to.