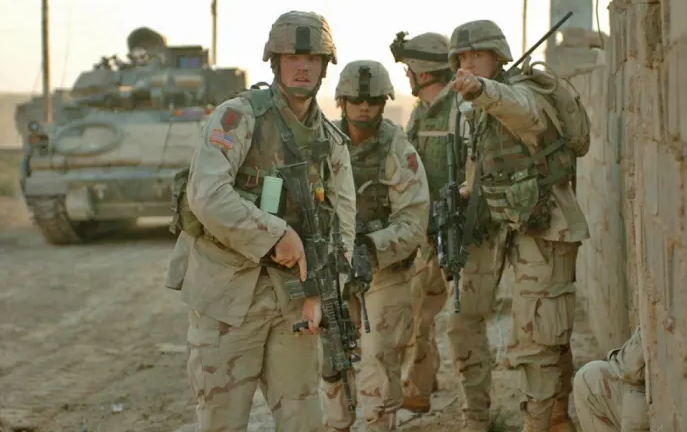 Death of the Ball Turret Gunner
By Randall Jarrell

From my mother’s sleep I fell into the State,

And I hunched in its belly till my wet fur froze.

Six miles from earth, loosed from its dream of life,

I woke to black flak and the nightmare fighters.

When I died they washed me out of the turret with a hose.

Now, the rest of the story.

Recently, I came across Randall Jarrell’s moving poem, “Death of a Ball Turret Gunner” and was struck by both its darkness and its complexity. Told from the perspective of a World War II airman, I wondered what Jarrell’s poem would look like if it were updated to reflect the modern realities of warfare in Iraq and Afghanistan. But where to begin?

I deployed to Iraq and Afghanistan seven times, once with the 5th Special Forces Group, three times with the 160th Special Operations Aviation Regiment, and three times with the national-level Joint Special Operations Task Force. I am an intelligence officer, and because of the nature of my jobs in these units all of my deployments were, when compared to those of my peers, very short and very safe. I spent most of my time on large Forward Operating Bases or FOBs, and I conducted few missions “outside the wire.”  I was, in the vernacular of my profession, a “FOBbit.”

But others’ experiences were vastly different, and far more deadly. Very early in my first deployment to Iraq with 5th Group, we received word that one of our non-commissioned officers (NCOs) was wounded in action (WIA) and lost both of his legs to a traumatic amputation from a roadside improvised explosive device (IED). I didn’t know the NCO and I don’t remember his name today. But one of my NCOs did know him, so we went to the field hospital anyway, because it was right there on Balad and he was our man. As we crowded around his bed in the MASH-like hospital, we saw that he was in terrible shape.

Although this was my first time in combat, this wasn’t the first time I saw a mangled body up close and based on those prior experiences, I was sure this man was going to die. Bloody bandages covered the stumps of both legs and numerous other parts of his pale body, and tubes and wires ran everywhere. He was heavily sedated but he opened his eyes a few times while we were in the room. In medical terms, I thought the man was “expectant,” as in “I expect him to die.” Not knowing what else to do when he made seeing-but-uncomprehending eye contact with me, I took his hand. And not knowing what else to say said what I thought I’d want to hear in that situation: “Hey sergeant, all of your men are OK.”

…and as it turned out, he was OK too, eventually. Before we came home, I saw a commercial on the Armed Forces Network that featured him walking on crutches during part of his recovery at Walter Reed. I can’t remember what his name was, but I remember how full of joy I was to see that he was still alive.

Fast forward a few years to another NCO, wounded in a different war zone. “Crip” was a Special Forces Medic who stepped on an IED during a mission in Afghanistan and lost most of a leg and experienced a multitude of other injuries. I never met him in person before he was wounded, but I “knew” him from a special operations-themed social media site we were both part of, called ShadowSpear.com.  While Crip was in recovery I was able to visit him twice at Walter Reed.  He was badly wounded, but largely due to his extreme level of physical fitness and his mental and emotional fortitude, he recovered enough to remain in uniform. In fact, he stayed with my family for a few days after he got released from Walter Reed and came with me to the first class I ever taught during my tour as an instructor at West Point. I remember telling my class that this was an example of the caliber of men and women they would lead in the Army, and that I hoped they were up to the task.  I was, and still am, motivated by Crip’s resilience, positive attitude, and dedication to his profession.

Many other individuals were wounded far worse than the men I just described, and of course, many of them didn’t come home alive. The difference between their experiences in combat and mine is stunning. The way they came home, and how they processed their experiences after they returned, were also often far different. A matter of days after my own return from my first combat tour, I found myself in Florida for my cousin’s wedding. I remember how surreal that felt sitting at the beach and drinking margaritas, as if the last few months never even happened like it all was some kind of crazy, smelly, hot, and dangerous dream.  But for many of my brothers and sisters in arms, coming home wasn’t the end of a dream, it was the beginning of a nightmare.  And for a few, it was more than they could bear.

Unfortunately, for most Americans, the wars our nation fights aren’t even so much as a daydream. Because so few people in America are actually even eligible for military service, and because we have no draft, war tax, or even a declaration of war, our conflicts aren’t “real” to most Americans. And because America seems content to confine the burden of military service to the emerging “warrior class,” which for me now includes both of my grandfathers, my father, several uncles on both sides of the family, my wife, and more than likely in a few years at least one of my daughters, most Americans don’t even know someone adversely affected by the war. So the “poor game” of perpetual warfare seems likely to continue ad infinitum.

In between the first and second WIA incidents I described above, I had the opportunity to spend a few years as a graduate student at Yale University on the Army’s dime and finally had the time to process everything that happened to my family, my brothers and sisters in arms, and my country since 9/11.

…and eventually, I came across Jarrell’s poem, and it made me think.

I served in Iraq three times: once with 5th Group and twice with the Task Force. During all three of those deployments, I was based on the Special Operations Forces (SOF) compound on Balad Air Base which was known by a couple of different names, but which will always be Camp Syverson to me. In very close proximity to our compound was the scrapyard where they brought all of the vehicles that were destroyed in combat. The hundreds of blown up, burned down, and shrapnel-shredded vehicles grew every time I deployed. During my first deployment, I went there a couple of times to scrounge spare parts and scrap metal that my guys could use to improve their living conditions, fortify their sleeping quarters, or “Mad Max” their unarmored vehicles. It was a surreal experience. I remember thinking that each of those vehicles represented at least one life irrevocably changed–or ended–for one of my fellow service members, and later thought about how apt a “scrapyard” was in framing an explanation of the experience of unending war for people who never served.

So, in thinking about a modern-day “Death of a Ball Turret Gunner, I thought I would start there, in that scrapyard, with the mental memory of a Humvee burned black and violated by shrapnel and the ghost of the man who I imagine stood in that turret in the last moments of his life and the “life” of that vehicle.

CLICK HERE TO CONTINUE ON TO THE NEXT PAGE