I first thought about how few Americans heeded the call to arms after 9/11, to the point where the US had to establish a de facto draft in the form of “stop loss” to keep people in the military past their terms of service (something that affected both my wife and me), and how many people who already served their time and got out of the military were involuntarily recalled to the service after they served their time and got out.  America called, and we chosen few answered.

From my mother’s embrace I rose to the call of the State,

I envisioned what it was like to be in the turret of a Humvee, behind a weapon yet dangerously exposed. There is often a feeling of both protection because of the weapon and (if your truck is equipped with it) the steel plates protecting it, but there is also a sense of vulnerability. Everyone can see you.  If they can see you, the saying goes, they can shoot you. If the vehicle rolls over or gets blown up, you’re probably going to die. I then thought about one of the greatest fears we had downrange: of getting burned alive.

And I hunkered in its steel until my dry skin melted.

Six hundred meters from base,

I thought about some people see death as a release from the terror and pain of combat, and gave a nod to Shakespeare with the line,

I shuffled off this mortal coil;

I thought about the terrors of Iranian-provided copper-faced explosively-formed projectiles (EFPs) and bombs so large they could lift a tank into the air.

I fell asleep to the sound of exploding copper.

I thought about the fear that many Soldiers face when they’re downrange, and the nightmares some Veterans have when they come home. Death, in combat or by their own hand, ends all that pain.

I thought about the way America thinks its veterans are disposable, about how the wars aren’t “real” to most Americans in any meaningful sense, and how despite the “never forgotten” bumper stickers, most dead Soldiers are that: forgotten. Disposable. Put in a box.  Flushed away after their utility is at an end.

At “end of mission,” they flushed me out of the turret with a hose.

I thought about all of that, and then I wrote this poem. 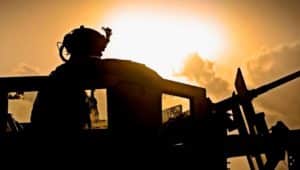 From my mother’s embrace I rose to the call of the State,

And I hunkered in its steel until my dry skin melted.

Six hundred meters from base, I shuffled off this mortal coil;

I fell asleep to the sound of exploding copper.  No more nightmares.

At “end of mission,” they flushed me out of the turret with a hose.

Editor’s Note: Lieutenant Colonel Charles Faint is a US Army officer. The views expressed in this article do not represent an official position of the US Army or the United States Government. This article first appeared in The Havok Journal in August of 2015.