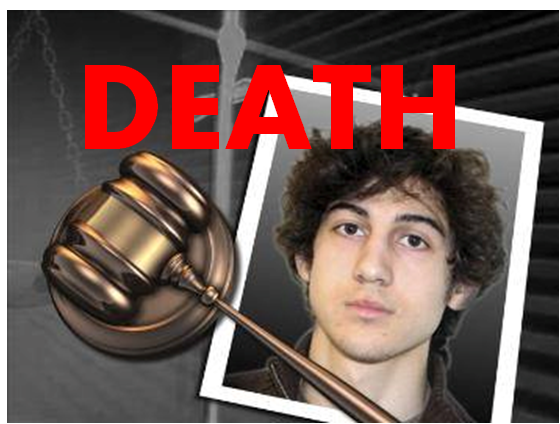 Dzokhar Tsarnaev, the surviving Boston Bomber, might not be “surviving” much longer.  In a move that surprised many, including this author, the young terrorist was sentenced to death today by a Massachusetts jury.

Massachusetts is not a death penalty state, but federal charges allowed the ultimate penalty to be on the table, and prosecutors pushed hard for the penalty to be imposed.  Jurors correctly disregarded claims that a death sentence would somehow make Tsarnaev a martyr, or that life in prison would somehow be a harsher sentence.  There was only one correct call in this case and the jury made it:  the death sentence.

With mandatory appeals and procedural foot-dragging that is inherent in the American legal system it is unlikely that Tsarnaev will ever be put to death.  Given his youth and health, it’s likely that he’ll suck up hundreds of thousands of US tax dollars while sitting on death row.  That is unless, of course, he kills himself or another inmate wants his 25 minutes of fame in exchange for murdering him.   For now though, Americans across the country are feeling slightly more satisfied by our legal system.

Hm, I wonder if Rolling Stone will want to put his picture on the cover of their magazine again after the sentence is carried out.