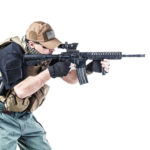 Help Wanted: Mercenary by Leonard Benton After the terrorist attack in Paris, fellow writer Pablo James told you how to join the French Foreign Legion if you really wanted to get into the fight. But there are some difficulties with that. You have to learn French for one thing. And it is a sincere commitment: The Legion doesn’t play. However, if you don’t want to … END_OF_DOCUMENT_TOKEN_TO_BE_REPLACED