Why should I care?

At the end of the day, that oil finances my country.

Those are the facts. 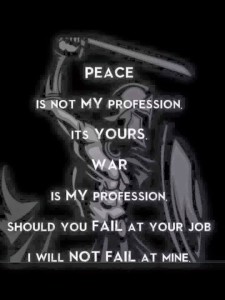 You guys like all your entitlement programs? You like your social services? Well, our country has to make a profit. The money has to come from somewhere.

Where do you think America makes a big profit? By controlling oil.

And how do you think America maintains its slot at the top of the pecking order? By controlling oil.

How would you like your bread to be 10 dollars a loaf? How would you like gas to be so damn expensive that you can’t even afford a car? That would be crazy, right? You wouldn’t want that, would you? You’d think that, if we got to that point, someone should have done something. That’s what you’d think, wouldn’t you?

What do you think we’ve been doing?

Why you think we’ve been fighting these wars?

So you can afford gas.

So you can afford bread.

But it ain’t going away.

And, since you don’t have to spend your time sitting out there with a gun (because you think it is so wrong and you’re not up for it), why don’t you take care of the people who actually are doing it? Because, at the end of the day, they are doing it for you.

And I don’t give a single wit if you believe in war or not. I don’t care if you are liberal or conservative, democrat, republican, independent, whatever … it doesn’t matter. Everybody benefits by what a Warfighter does. Everyone.

Everyone in this country benefits by being in the top slot of the pecking order. And the warfighter is the one who defends/maintains that slot.

4) DOMINANCE WILL BE DEFENDED
Do I really care why my country sends me to war? No, I don’t.

Let’s look at it this way: If bread was 10 dollars a loaf … If gas was so expensive that you could not own a car (which would affect a lot of things) … Would you start revolting against your government? Would you start telling them to go do something? Would you threaten to remove them?

I’m guessing that you probably would. I’m thinking that there would be a lot of dissention in the country.

They obtain security by pacifying the populace and controlling the environment.

When bills are passed, it’s because the government is going to get more people pissed off if they don’t than if they do. There is no other reason.

See what I mean? Pacify and Control. That’s the job of the government. All governments.

It has always been that way.

It will always be that way.

It will never change.

Just like the pecking order – it will never change. That’s the way it goes.

I don’t make the rules. I just know what they are and I explain them.

So they can continue to exist.

That is the way it goes. Again, I don’t make the rules. I just know what they are and I explain them.

That’s why I am telling you that humans killing other humans is 100 percent natural. Every Government, every society, every entity that’s ever existed has done exactly what I’m telling you. They kill to establish their position. And if a dominance challenge occurs, they kill to maintain it. That’s the way it is. It’s always been that way. And it will always be that way.

If you don’t have the stomach for it, then appreciate the people who are willing to do it and live with the aftermath. Since you didn’t have the whatever-it-took or maybe it wasn’t convenient for you … that’s fine. You can have your way. You don’t have to do it.

But the rest of us?

We don’t care if you don’t agree with the war.

We don t care if you hate veterans.

We don’t care if you hate the military.

Why don’t we care? We don’t care because, at the end of the day, we kind of own you. Because, if we don’t do it … your life falls apart. You can’t afford to buy food. You don’t have a car. And you can’t take care of your kids.

1) Killing is natural.
2) Dominance can be established (and maintained) by controlling resources (oil).
3) Killing for oil maintains our slot in the global pecking order.
4) Governments defend themselves from threats (internal and external) through pacification and control.

There you have it. The long and the short of how the world works.

Did you enjoy this piece? Read this one.