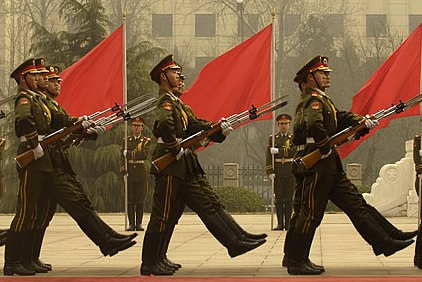 The relevance of Carl von Clausewitz’s theory of war continues to endure in the face of tensions between the U.S. and its allies on the one hand, and nascent military powers China and Russia, on the other. As the status quo continues to uphold the primacy of international law in enforcing global order, Clausewitzian theory becomes even more pronounced through the subordination of war as an instrument, albeit unpopular by default, of political decisions.

Both Beijing and Moscow’s tendencies to exert force to fulfill their interests vividly portray how Clausewitzian thought manifests and contributes to possible solutions in the modern age. Both China and Russia have shown strong inclinations to violate the Westphalian nation-state system, which promotes states’ equality regardless of size under international law and downplays the importance of might to safeguard every country’s sovereign rights.

China’s forceful – even belligerent – insistence on sovereign claims in the South China Sea – a matter already decided by the Permanent Court of Arbitration against Beijing, manifests the country’s growing confidence to flex its military capabilities amid its rapid economic upsurge in recent years. The nationalist tenor set by the incumbent regime has sought to maximize China’s massive economic boom to benefit Beijing’s efforts to both assert its maritime claims and stiffen its grip on its tumultuous western regions, all the while keeping its populace in line with its authoritarian regulations.

China’s propensity to use economic statecraft to achieve political ends can be observed from the struggle of Southeast Asian countries to form a consensus on the South China Sea dispute, as many of them fear the economic consequences of reducing their trade volume with the world’s second-largest economy. This, among many other instances, allows China to continue its encroachment in the disputed water, raising the possibility of a hot war in the region.

Russia’s two-part invasion of Ukraine, first in 2014 through its seizure of Crimea and then this year through large-scale military operations intending to overthrow the incumbent Ukrainian government, serves as a more deliberate breach of the nation-state concept. Moscow’s recent actions have since roused fears of a Third World War over a possible intervention of NATO member-states in Ukraine’s defense. This scenario aggravates Russia’s historically frosty reception towards the transatlantic alliance.

The incumbent regime’s enduring paranoia towards the U.S. and its Western allies, coupled with its authoritarian subscription to the “glory days” of the old Soviet Union, characterizes Russia’s persistence to project power towards Europe. Its most dangerous rendition is its unprovoked attacks on Ukraine. Stiff Russian insistence on its right to interfere in Ukrainian self-determination on historical grounds further motivates a destructive approach to subduing Ukraine.

Clausewitz remarkably emphasized that war cannot be autonomous from politics, as it serves as a means for reaching specific political ends. Policies both warrant and temper war, subject to how it is aligned with the purpose at hand. Economic sanctions are a type of policy that can either trigger war and encourage its escalation or reduce the aggressor’s incentives to start or continue with an ongoing war. In the trade war between the U.S. and China in 2020, there were fears that Washington’s sanctions against Beijing might escalate into physical conflict, given how these could exacerbate ongoing tensions in the South China Sea.

On the other hand, economic sanctions imposed by Western countries and allies against Russia seek to tighten the noose on Moscow’s invasion of Ukraine and urge the Kremlin to return to the negotiating table. In both cases, economic sanctions can heighten targets’ belligerent behavior or weaken their resolve to use military means. These examples demonstrate the continuing relevance of Clausewitzian theory on understanding war in the modern age.

Further, economically isolating both China and Russia highlights the role of friction in limiting their resort to war, insofar as it risks alienating their respective populations towards full-blown crises of legitimacy against their ruling regimes. The more they gravitate towards the least peaceful means of securing national interests, the more they attract the enmity of their citizens, whose nationalistic feelings will very well remain within the realm of obligation in the absence of any effective propaganda that would fuel a passionate defense of interests, as is typical of aggressor countries. In this case, both the rogue regimes within China and Russia are thought to invest in misinformation to retain war as a potent policy choice for executing their intended ends.

Propaganda, primarily through social media, has helped buoy China’s constant assertion of the nine-dash line, despite the apparent absence of any compelling historical basis and Russia’s fervent citation of a particular variation of history in defending its move to invade Ukraine. Control over information thus serves as a modern manifestation of the Clausewitzian position of aligning the use of war with political ends. It seeks to convince people that they have a valid purpose once they are called to arms by their government.

Technological advancements are another crucial aspect of applying Clausewitzian thinking about war as a policy tool in the modern age. It is tempting for the uninitiated to think that the emergence of more sophisticated weapons and tools for warfare make Clausewitz’s three imperatives for war, namely (1) destroying the opposing forces, (2) occupying the target country, and (3) breaking the enemy’s will to defend and fight, more achievable. Yet, Clausewitz himself has reminded that the use of violence ought to be controlled to make war less costly and lengthy when unavoidable.

The prevalence of international patrols in the South China Sea and the stiffer-than-expected resistance of Ukrainian forces show that brute force can generate a potent defense depending on the intensity of attacks. An excessive exhibition of might, one that goes way beyond what is necessary for securing national interests, would continue to prove perilous in contemporary settings. Both China and Russia must continue to be wary of probable consequences to that regard.

Overall, modern-day predicaments presented by China and Russia continue to accentuate the enduring importance of Clausewitz’s thoughts on war. To forcibly languish Clausewitzian thought into obscurity is to ignore the structural features that characterize both countries’ deviance and aggressiveness, both apparent and palpable.

As such, Western responses to the challenges presented by both countries should continue to adhere to the principles of commensuration promoted by Clausewitz – that of war being a least-favored option that demands a close alignment with existing political purposes.  Applying the more peaceful instruments of national power remains a favorable proposition to this day, hence emphasizing the lasting importance of Clausewitz’s thinking about war as the least-favored last resort for realizing political achievements.

Major Robert “Bobby” Ali is currently serving as the CSL Program Manager at the Human Resources Command. He holds an M.A. from Webster University, M.A. from Liberty University, and an M.A. from the Naval War College. During his career, Major Ali has served within the 1st Infantry Division, 2nd Stryker Cavalry Regiment, the 10th Mountain Division, 7th Signal Command, and the 8th Theater Support Command.