HomePoliticsInternationalRussia: All They Do is Win 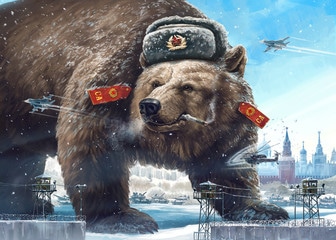 Russia: All They Do is Win
by Major Joshua A. Lyons

Russia continues to act as a shrewd and patient player testing U.S. decision making and patience within the USCENTCOM area through direct and indirect military actions just below the threshold of conflict within Arabian Peninsula countries, in effort to reclaim its past global status.

This is most evident through habitual violations of its own agreed upon air space de-confliction measures to being involved in what surmounted to a, block and escort fender bender with a U.S. M-ATV patrol along a Syrian highway in mid March 2020. Russia continues to test and prod the U.S., along airspace in the North American continent, all the while enhancing its clout as the most viable partner of choice regionally within USCENTCOM. Russia is always careful to paint itself as the non-aggressor and enables the worst possible perception of the U.S. through its continued use of Information Operations.

As conflict continues within the tri-border region of Jordan, Syria and Iraq, the long running U.S. counter Daesh campaign continues sapping U.S. political will and military resolve to achieve unnamed strategic end states. The Operation Inherent Resolve footprint is slowly shrinking as land space is turned back over to Iraq. Russia leverages this fog of continued but declining U.S. support to position itself regionally in a way that assures its perception as THE viable partner option to all those with interest to a U.S. alternative within the Middle East.

This is most evident in Russia’s increase in foreign military sales and enhanced political ties to governments within the region. The painting of itself as the alternative option to the U.S. is nothing but self-serving. Russia continues to see boosts in its economy as the U.S. campaign to pressure Iran creates rises in its natural resource value only being offset by its natural resource competitor Saudi Arabia. When the U.S. creates political or economic confusion, it directly lines Russia’s pocket books.

Beside the turmoil stemming from the unintended deaths of Turkish forces during a recent Russian strike in direct support of Syrian pro-regime forces, Russia has positioned itself to reap the intangible benefits of perception by sitting back and allowing the U.S. to stress regional relationships as it intensifies its super maximum pressure campaign against Iran. Through both action and inaction Russia is placing itself to seem as the victim, and subsequently the level headed party between themselves and the U.S. to the world at large.

As the U.S. tries satiating the appetite for support in the form of providing protection to critical infrastructure within Saudi Arabia, it continues to die the death of a thousand cuts on its northern Middle Eastern flank. With the U.S. focus shifted toward deterring Iran, it is allowing Russia to slowly usurp the U.S. as the stabilizing broker for peace in the area. This ties directly into Russia’s strategic end state of extending its influence beyond EUCOM and reinforcing its foothold and presence within the Arabian Peninsula.

Russia continues to conduct questionable practices, and yet retain the ability to make it look as if it hasn’t done anything contrary to follow rules. Simply put, no matter what move the U.S. seems to make, all Russia does is win.

Major Joshua Lyons is an officer in the United States Army. This article does not represent an official position of the U.S. Army or the U.S. Government.