HomeNational SecurityDefenseGEN McChrystal On ISIS: Four Tips From Someone Who Actually Knows How To Fight Terrorists

When it comes to defeating terrorists, General McChrystal gets it.

At a time when our political leaders freely admit that they don’t have a plan to deal with ISIS, or try to tell the nation that we’re somehow “not at war” with a de facto state that our President claims we’re nonetheless going to destroy, it’s deeply refreshing to hear from someone who not only understands how to defeat rabid Islamist murderers, but has actually done it. 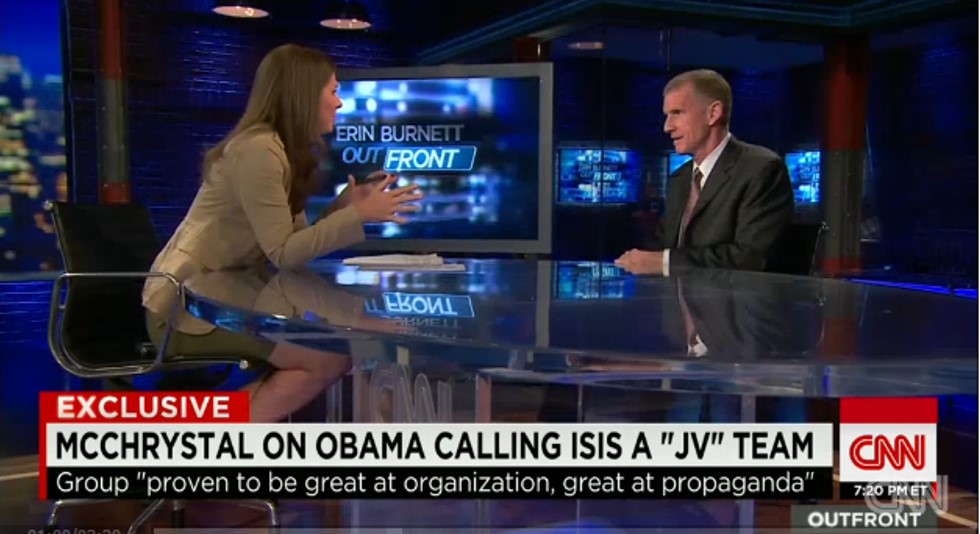 In a recent interview with CNN, General Stanley McChrystal, who formerly commanded both the Ranger Regiment and the brutally effective Joint Special Operations Command, outlined several key points that I hope our political and military leaders paid attention to.  If they’re serious about getting after ISIS, they should have McChrystal’s number on speed dial.

I personally served under McChrystal’s command many times in both Iraq and Afghanistan and have seen the results of the kind of actions he advocates.  Although I have’t worked for him in years, in my mind he still possesses the ultimate credentials:  his method of fighting terrorists works.

Below are four excerpts from McChrystal’s interview, to which I’ve added some personal commentary.  If you really want to understand what it takes to defeat terrorists, you don’t listen to the feckless empty suits who would rather launch hashtag campaigns than black helicopters—you listen to real warriors like Stanley McChrystal.

1)  “The effectiveness of a group is not its numbers, it’s how effectively it’s connected.”
This was certainly true of JSOC, whose relatively small size belied the organization’s enormous impact on the battlefield in Iraq, Afghanistan, and many other locations around the world.  McChrystal correctly recognized that small groups of specially selected, highly trained, and well-supported operators, backed by superb intelligence, could be entrusted to do what needs to be done in a complex, protracted, and often bloody conflict.  JSOC wasn’t a large organization when McChrystal took over as commander, but because he was effective where others weren’t, he kept getting more and more resources and achieving better and better results.

A key aspect of the success of McChyrstal’s plan was his emphasis on building a network to defeat a network.  Unlike many others in the Special Operations community, McChrystal was willing to reach out to other units, other services, other agencies, and even other countries to put a team together that used precision intelligence to drive operational and tactical decisions that resulted in operations at a pace faster than the enemy could withstand.  Units under McChrystal’s command would crack open enemy networks and exploit them up and down the chain until those organizations were utterly exhausted and completely neutralized.  Then they would move on to the next one.  This is the kind of mindset, commitment, and persistence that it will take to defeat ISIS.

What was true of JSOC then is true of ISIS now.  ISIS is very well connected… at least, it’s better connected than the governments and other groups it is fighting.  No group is better than JSOC at breaking up that connective tissue that allows terrorist groups to function.  Getting after the way the group functions, rather than obsessing over how big it is or whether it is “JV or varsity,” will give real results.  What kind of results?   You can hear it for yourself from no less than the Presidential level:

2)  “Killing the individual (leader) almost never solves the problem.”
While he was in command, General McChrystal would often send out articles or book excerpts for the command to read with the intent of us understanding the enemy better as well as helping explain his commander’s intent.  One of the things I specifically remember reading was from “The Starfish and the Spider,” which explained the differences between leader-centric and leaderless organizations.  In the US, we are very accustomed to highly centralized, hierarchical organizations in which individual leadership really matters.  Because of this, we often see killing a leader as the most effective way to destroy an organization.

t’s usually useful to kill off key leaders, because there is some degradation in effectiveness afterwards, but you can’t kill off an idea simply by killing off its most visible adherents.  AQ in Iraq didn’t fall apart after McChrystal’s team killed Al Zarqawi, and AQ core didn’t cease to exist after McChrystal’s successor at JSOC, Admiral William McRaven, got Bin Laden.  Nor did McChrystal or McRaven expect them to.

Killing the “irreconcilables” of all ranks is a key component of the overall plan, but it is only one small component.  Unfortunately, we tend to obsess over getting after leadership to the point that it impedes on other actions that are paradoxically more effective in the long run.

3)  “You have to get after the people who get things done.”
“People who get things done” aren’t always the leaders.  Sometimes, especially in the lower echelons, the leaders are almost unimportant.  Facilitators, financiers, couriers, logisticians, intelligence operatives, and recruiters are people who play key roles in enabling terrorist activities.  Funding and a constant influx of foreign fighters to offset losses and export the ideology are key to terrorist groups like ISIS.  Even if we can eliminate or substantially reduce just one of those two, we stand a much better chance of ultimately defeating ISIS.  If we concentrate too much on attacking individual jihadists and/or their leaders, we run the risk of playing a perpetual game of Whack-A-Mole.

4)  “You go after the idea that makes people want to be a part of it.”

General McChrystal saved his most important piece of advice for last.  Our President wants to “destroy” ISIS.  But how does one destroy an idea?  Even though the world “destroyed’ Nazism in World War II, the ideas behind it persist to this day, and neo-Nazi groups exist throughout the United States and around the world.  The difference between then and now is in the level of appeal.

Right now, ISIS is VERY appealing to a large number of angry, violent, dispossessed people.  Only by giving them an idea they care more about, whether that is an idea that gives them a better vision for the future, or one that gives them a bleak outlook if they hold on to one they currently have, we’re not going to make positive permanent change if we neglect the ideological battle.

McChrystal’s strategy worked against Al Qaeda in both Iraq and Afghanistan, and it will work against ISIS too, since they are merely Al Qaeda under a different banner.  Absolutely no disrespect to the distinguished career of General Allen, the retired general officer who was tapped to lead the effort against ISIS, but if the situation is so dire that no one on active duty can handle it, the President should have swallowed his pride and tapped McChrystal, not Allen.

Yes, I’m well aware that President Obama fired General McChrystal in the aftermath of a Rolling Stone article, for which McChyrstal was later exonerated.  But McChrystal spent a decade or more directly confronting the kind of foe we currently face.  He alone knows the stakes, understands the players, has the interagency and intergovernmental network of personal contacts, and above all has the track record to take on this task.  Only he was capable of turning JSOC into what it ultimately became, and he is the best person we have to defeat ISIS.  Put him back in, coach.